Big Green Ammo is Back!

Big Green Ammo refers to one of the oldest gun and ammunition manufacturing companies in America, Remington — released a video earlier this year in April on their Remington Ammunition YouTube Channel showing the company’s president touring their plant and talking about how supply chain issues had been overcome with production back at 24/7 capacity. Three months later it would appear that Remington has certainly delivered as the iconic green ammo boxes have been more easily found in local stores.

Check your local ammo suppliers and let us know if that’s the case for you too! Overall, this is great news compared to the news of Remington’s bankruptcy last year. Even if prices are still high they are still currently on a downward trend so at this point all it’s going to take is a little more patience.

We’re talking about New York Governor Andrew who has declared a disaster emergency for gun violence, treating it like a public health crisis, but all sides of the political spectrum are giving Cuomo the side-eye for this — Cuomo has been under heavy fire for months for multiple scandals such as a sexual assault allegations, nursing homes being bombarded with COVID patients in 2020 and a very lucrative book deal.

Recently there were a couple of shootings in New York that were not necessarily high profile but highly publicized. It would appear that Cuomo is using some of these events to justify his new “state of emergency”; however, this doesn’t just go for Cuomo… all citizens should be very concerned whenever politicians use emergency powers. This time, Cuomo’s using it to win back some brownie points from his constituents for being a louder anti-gunner. Don’t let him or any other politician be rewarded for such behavior.

For issuing his executive order, Cuomo will have access to $138 million in state funds to pay for efforts to combat what he calls a “gun violence epidemic.” Part of these efforts includes legislation Cuomo plans on signing to make it easier to use gun companies for gun violence. The National Shooting Sports Foundation Vice President Lawrence G. Keane promptly called out Cuomo for shifting the blame of his administration’s failure to prevent crime by pointing fingers at firearm manufacturers instead. 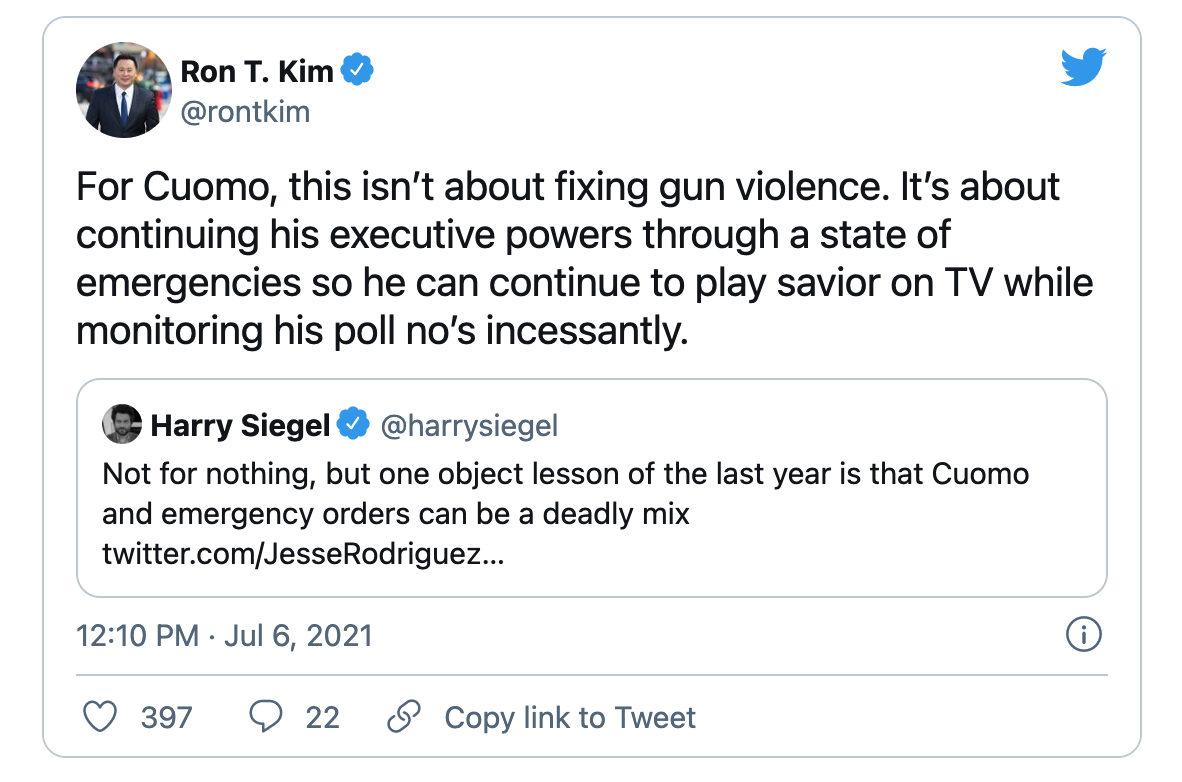 Following the mass shooting at a railyard in San Jose, California, the city put out gun control legislation that is a real head-turner. On June 27th, the city council passed local ordinances that would require every gun owner to buy liability insurance coverage for owning firearms and pay a fee to compensate taxpayers for the emergency medical and police responses to gun-related injuries and deaths. Gun stores would also be required to record all firearms transactions via video but what respectable establishment doesn’t do that already?

There are several problems with this: first, is that this outrageous law is not enforceable. San Jose citizens could simply purchase a gun at a store in a nearby town which isn’t subject to San Jose city ordinances. Furthermore the San Jose city council hasn’t even decided what that “fee” will be in terms of amount. If you ever needed an example of law abiding citizens getting the short end of the stick for the actions of a few criminals this is primetime.

Although there are no clear paths of enforcing this new law for San Jose residents, their mayor Sam Liccardo has reportedly said that “gun owners who refuse to comply with the new rules would have their weapons seized.” Ok, good luck with that Sam. Ironic that when gun owners created an insurance product that had real market value - such as insurance to cover legal bills in the event of a lawful self-defense shooting, state regulators banned it in Washington and New York; gun control groups celebrated those bans. But when useless insurance, basically an unconstitutional and extra tax at best, is put in place citizens are forced to buy it whether they want it or not. All this law does is take more precious tax dollars from residents. It protects the city, not the people impacted by crime or its victims.