When we talk about ammunition for the AR-15, the most likely mentions include .223 Remington, 5.56x45 NATO, and .300 Blackout. Why? Because they are the most popular and readily available rounds available for sporting rifles today. But they are not the only rounds available.

Have you heard of the debate between  6.5 Grendel vs. 6.5 Creedmoor? Firearms enthusiasts everywhere can argue for hours about the two rounds and their ideal uses, kinetic energy ratings, and price per round comparisons.

Did you know that in Europe, the 6.5 caliber is immensely popular? Both hunters and target shooters adopted the round over a century ago. Here in North America, we stuck to what we know. That is changing, though. Both of the 6.5 caliber rounds we discuss here are making waves.

The History Behind 6.5 Grendel Vs. 6.5 Creedmoor 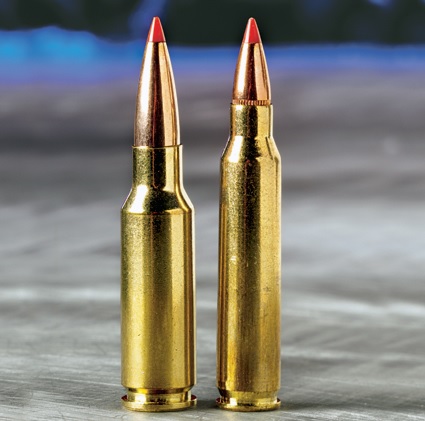 Both the 6.5 Grendel and 6.5 Creedmoor were designed with unique goals in mind. Like most other AR-15 ammunition, though, 6.5 Grendel stems from a desire to replace the iconic .223 Remington, while 6.5 Creedmoor hails from the .308 Winchester round.

During the Vietnam War, the M-16 and 5.56x45mm NATO cartridge saw extensive military use. That use left a lot to be desired, though. Soldiers in the field reported inaccurate ammunition and regular weapon jams. A better platform and caliber were necessary. Enter the 6.5mm caliber.

Many companies sought to improve upon the .223 Remington and 5.56x45mm rounds. Thus Bill Alexander, the creator of the .50 Beowulf, set out to develop the 6.5 Grendel by modifying a 6.5mm PPC case and succeeded. The 6.5 Grendel is significantly more potent than the original .223 Remington while still running in an AR-15.

The 6.5mm Grendel was first publicly announced in 2003 at a Blackwater Training Facility in North Carolina where it displayed its ability to pack a bigger punch than the 5.56 NATO round – one could consider it as the round that basically became the US version of the 7.62x39.

On the other hand, 6.5 Creedmoor was developed largely because of the competitive shooting scene. Dave Emary and Dennis DeMille, of Hornady Manufacturing, worked on the cartridge in the early 2000s. Their goal was simple: create a round for high-power rifle competition shooting, specifically with a high ballistic coefficient, that was more shootable than a .308.

The initial design drew inspirations from the .260 Remington, a wildcat cartridge. Again, they saw success. The 6.5 Creedmoor was as accurate as the .308 Winchester but delivered less recoil, had less wind drift and a relatively flat trajectory. In fact, most people in the precision community now consider .308 to be a completely dead round for the sport, with no reason to choose it over the 6.5 Creedmoor.

In terms of precision shooting rounds, the 6.5 Creedmoor became one of the most hotly discussed cartridges of the 21st century. Originally introduced in 2007, today, almost every barrel manufacturer in the U.S. has tooled up to accommodate for the hotly demanded barrel chambered in 6.5 CM.

As 6.5 Creedmoor was based on the .308 cartridge, it's naturally a larger round. The 6.5 Grendel features a rim diameter of .441”, while the 6.5 Creedmoor is .473”. The larger size means the Creedmoor round achieves a higher maximum average pressure, because it has a larger case capacity for more powder.

The sheer size difference between the two rounds means a significant gap in ballistics. That being said, both rounds were built with unique purposes in mind. One was meant to replace .223 Remington, while the other was meant to improve upon .308 Winchester—two distinct rounds with massive differences of their own.

As you can see 6.5 Grendel and 6.5 Creedmoor are fantastic rounds that successfully improve upon their respective parent rounds. But like all other rounds, each one has its own optimal application.

In terms of intended applications, the 6.5 Grendel is best if you only expect to be using it in a rifle meant for home defense or any kind of target shooting on a range. It is also a very viable caliber for hunting white tail deer and varmints. If you're looking for a caliber that's somewhere in between the 5.56mm NATO and 7.62mm NATO rounds, this is it.

To be clear, both calibers are excellent for hunting small game such as feral hogs, whitetail deer, and fallow deer at short- to medium-range distances. However, if you wish to hunt larger game, bigger than a deer, then 6.5 Creedmoor is the better choice. In Europe, hunters will take down moose with 6.5 Swede, which is fairly close to the 6.5CM round. Even in competitive shooting, 6.5 Creedmoor is the clear winner when compared against the 6.5 Grendel for its superior bullet velocity and (less bullet drop) flatter flight path.