Safety selectors, they come in mil-spec lower parts kit baggies and for some this small part might mostly be an afterthought but by no means should it be. Not all of us can be as cool as Norm Hooten from ‘Black Hawk Down’ so make sure you get used to manipulating that safety and incorporating it into your shooting drills.

Why get a new AR-15 safety selector? 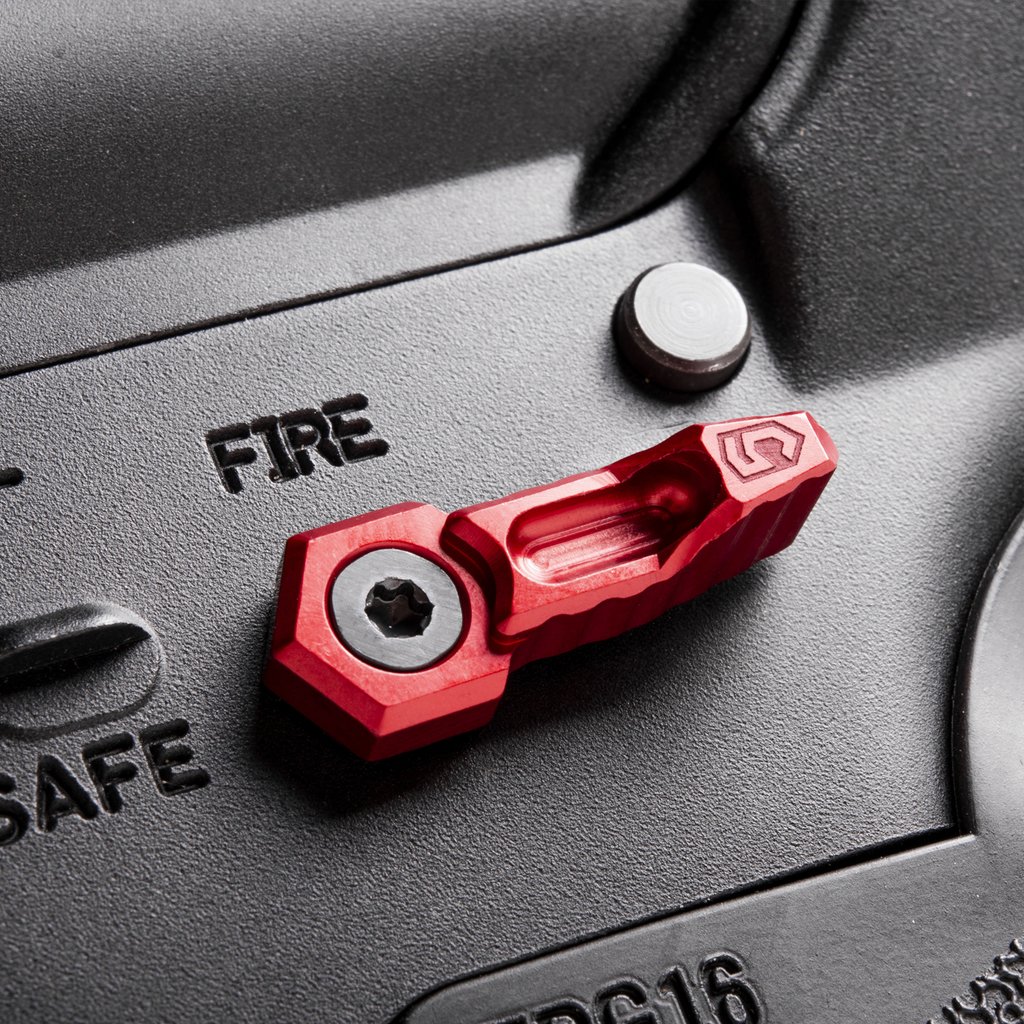 Basically every aftermarket AR 15 safety selector comes with ambidextrous switches which help to make the user a more effective shooter when shooting on the weak side. Most, if not all, AR15s will come with right handed safety selectors without a solution for left handed shooters. Ambidextrous safety selectors change that and include left handed shooters to be able to easily flip the safety selector switch just like everybody else. Lastly, a lot of gun owners will do this modification because it’s a cheap (relatively) and quick modification to give your AR15 rifle an attractive little flare or color — see some of the wild designs below.

First things first, if you’re looking for the “best” AR 15 safety selector make sure it’s an ambidextrous one since you’re going to spend money you might as well get more material out of your purchase which in this case comes in the form of a second safety selector switch (though, some people do prefer having the safety selector only on one side of their rifle). But like with all things, what's “best” can be very subjective so we’ll be going over our personal favorite AR15 safety selector switches and some other brands that just aren’t for us. 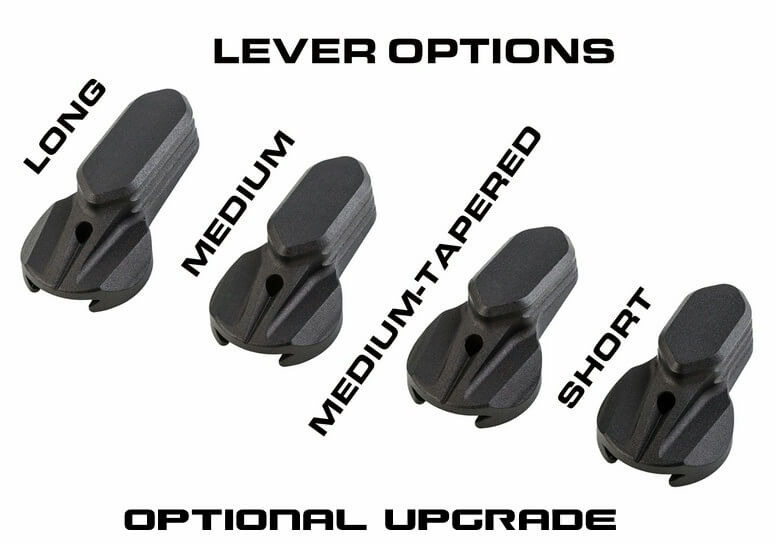 Personally, the mil-spec AR-15 safety selector switch is akin to stock Glock sights for me. I take it out and throw them away almost immediately upon purchasing a new rifle or while in the build process of completing an 80% lower. The Radian Talon sits at the top of our favorite AR15 ambidextrous safety selectors and is among the most popular brands that make this part. Radian also makes their own AR15 rifles and is well known for their Raptor Charging Handles.

Radian safety selector levers are machined from aircraft grade aluminum and have four different sizes to accommodate for every type of shooter’s hand size or preference whether they want to have an ambi safety or not. The Radian safety selector comes in all standard colors you’d expect such as black, grey, FDE, or ODG but you could easily spray paint these into whatever color you wanted. 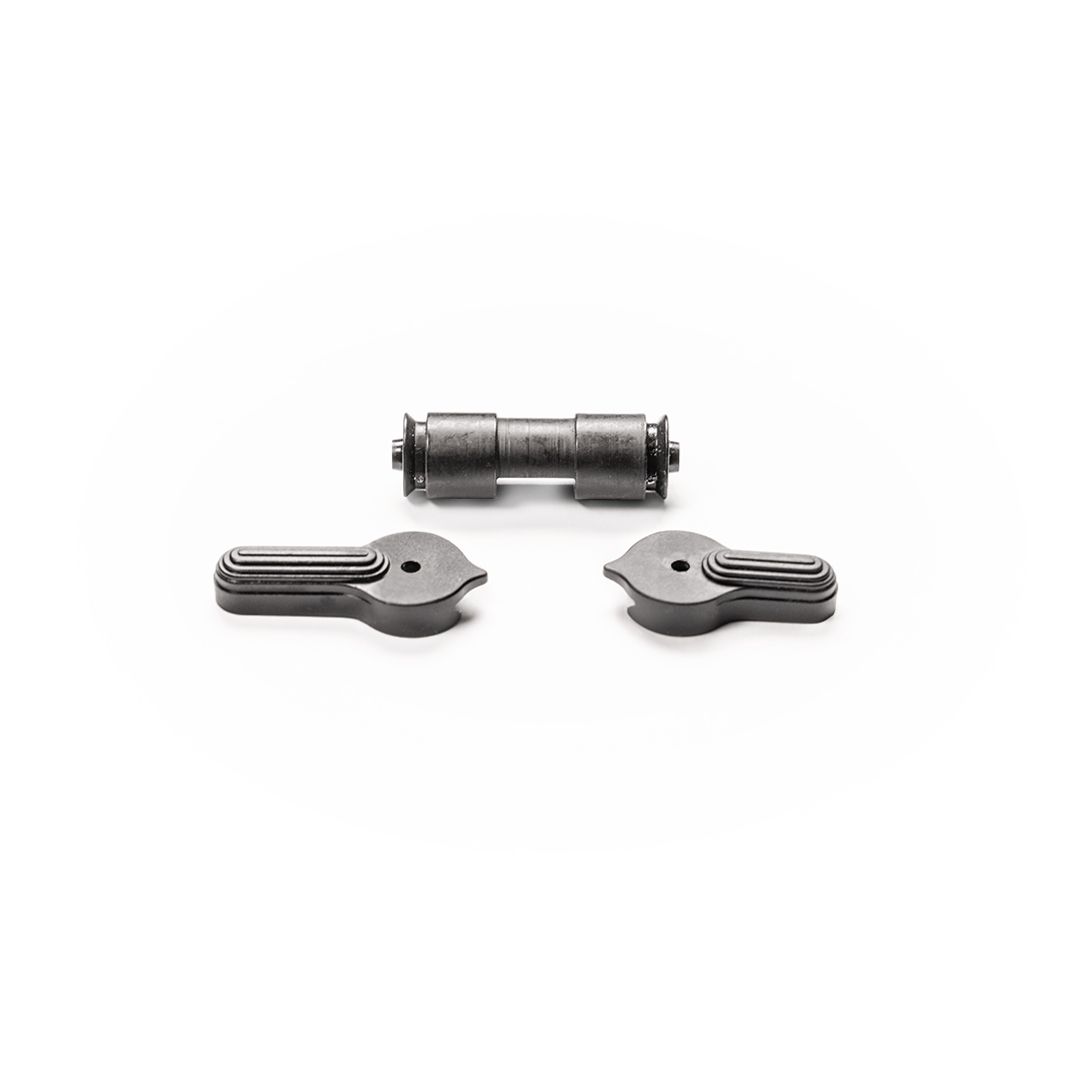 The AR-15 safety selector from Geissele Automatics is called the ‘Super Configurable Safety Selector.’ It’s retained in the same way Radian Talon safety selectors and is ambidextrous with one of the levers being significantly shorter than the other. The levers themselves are a mil-spec style so if you want to retain that sort of look you certainly can with this ambi safety selector. Even if you’re right handed, some users report using the shorter lever on the left side of the receiver so for shooters with bigger hands it won’t dig into your dominant hand anymore. Then, with the longer lever on the right side of the lower receiver it makes it that much easier for your off hand to manipulate the safety selector switch. 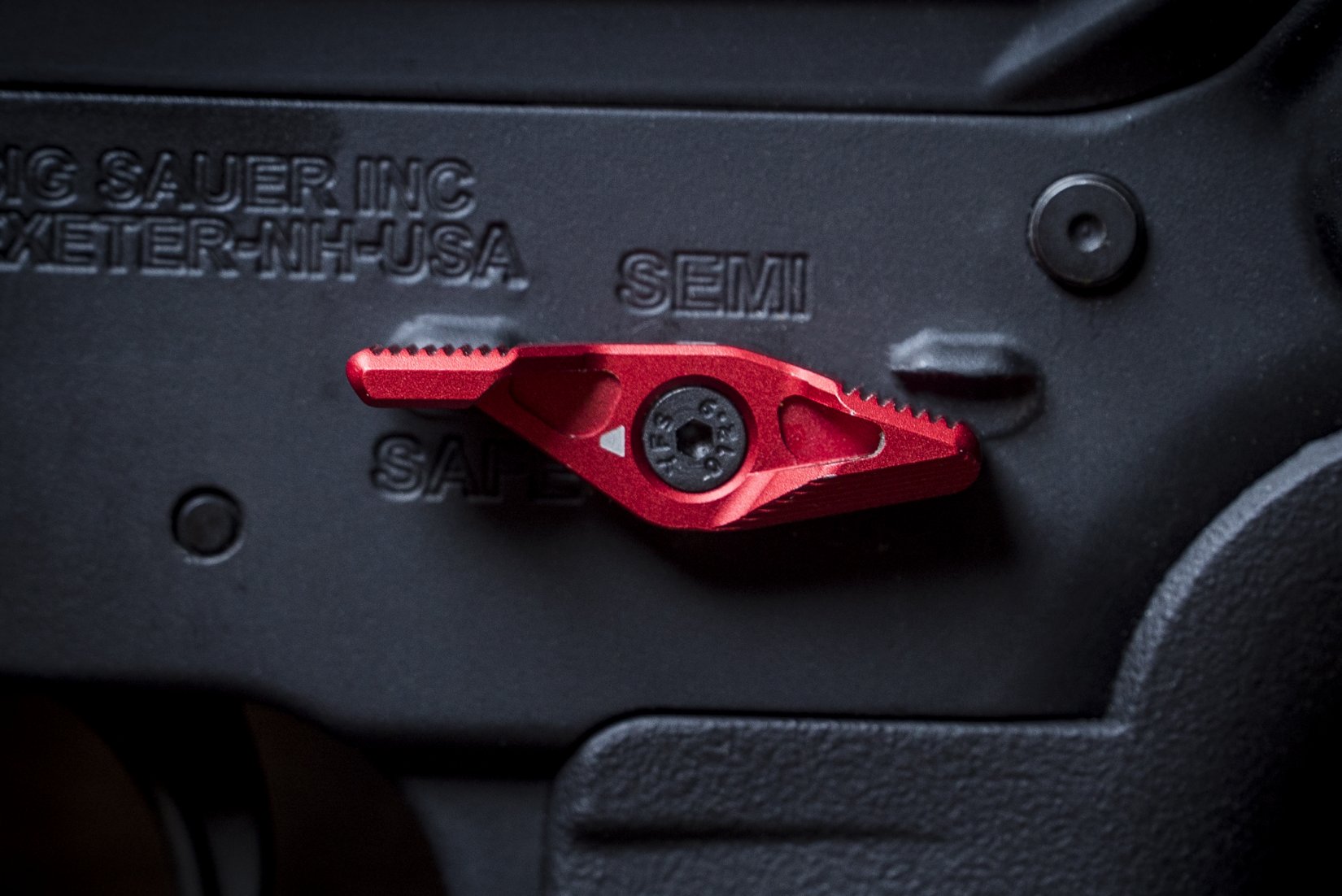 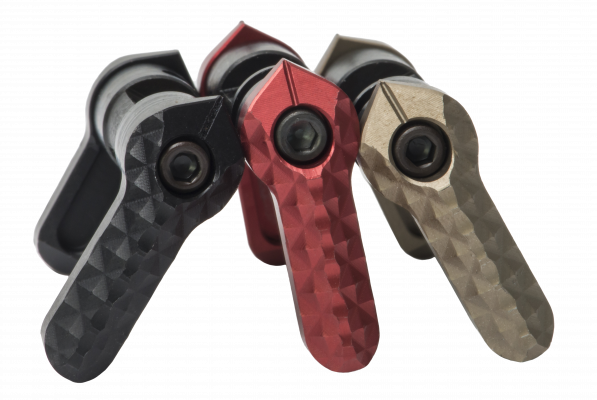 Seekins Precisions has safety selectors that come with texturized levers (one shorter and one longer) for a more aggressive feel. At a certain angle one might think that these are made out of carbon fiber but they’re not. They’re made out of 6061-T6 aluminum and anodized in one of three different colors as you can see above. The ambi safety kit can be configured for either a 90 or a 60 degree throw and is held in place by two hex screws. 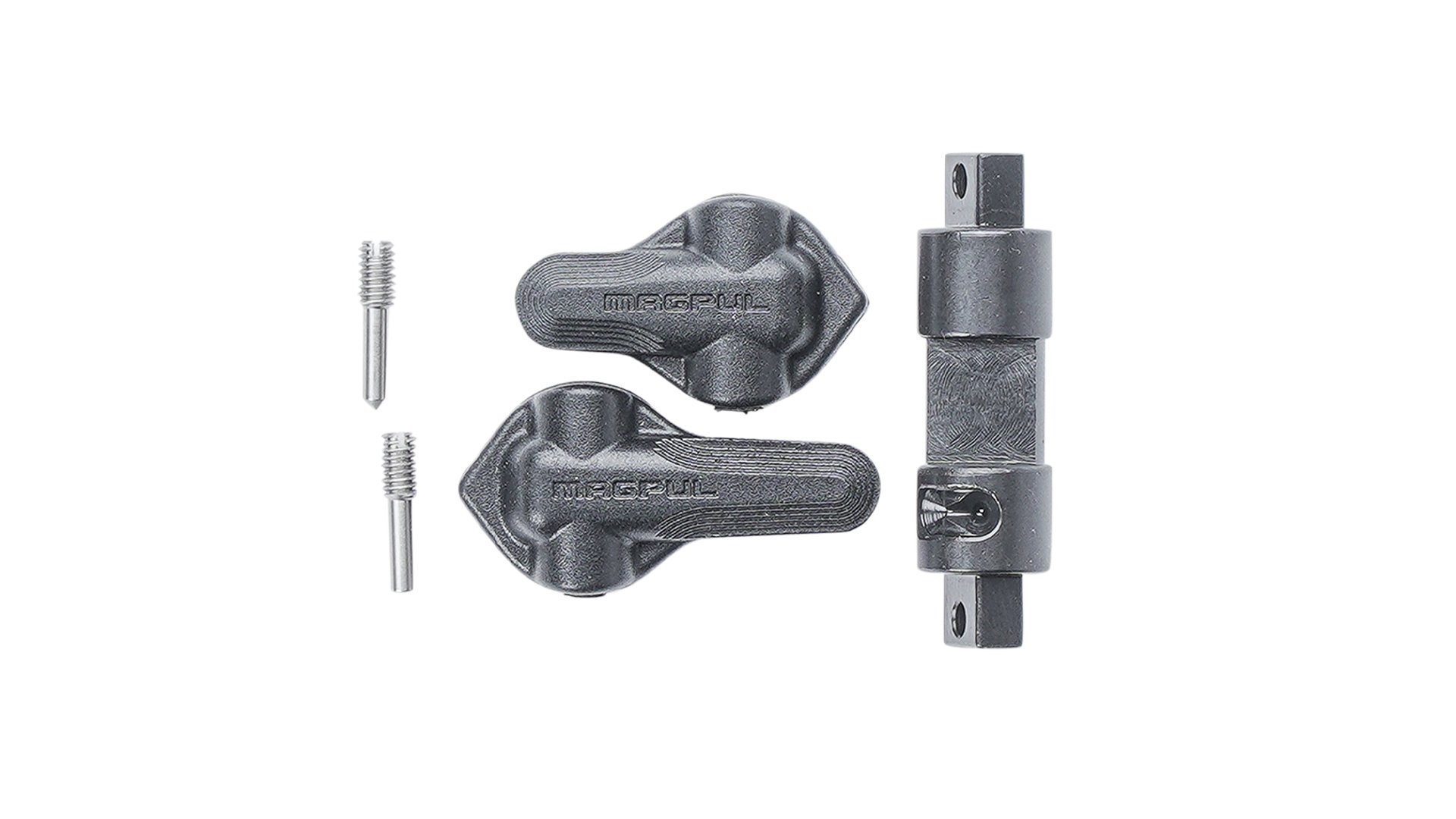 With Mapgul being one of the biggest names in AR parts and accessories, you might be wondering why they don’t have a wide array of safety selectors as well? Turns out that they do have one, but it’s exclusively sold by Noveske and they come standard in Noveske rifles as well. Interesting right? Well, this ambi safety selector is pretty straightforward. It’s made out of stainless steel with a black nitride finish. They use two screws to hold the two levers in place, one shorter than the other and it only has one configuration setting which is for a 60 degree throw. If you’re interested in the Noveske Ambi STS you can get it directly from the Noveske website.

Get your AR 15 Safety Selector From 80 Percent Arms!