Slings are typically one of the last accessories bought, simply because who buys a sling for a gun that they don’t have finished? But in reality, I find slings as one of the most important and beneficial accessories available for your beloved AR. With the average bare AR-15 weighing in around 6.5lbs; after a full magazine of ammo, optic, and rail accessories, it's not uncommon for an AR-15 to weigh upwards of 9 or 10 pounds. While that may not seem like a significant amount of weight for you tough guys out there, after a few miles in the woods you’ll be welcoming the idea of a sling.

Having your rifle on a sling permits you the ability to take the brunt of the weight taken off of your arms, thus allowing you to stay fresh and un-fatigued if you need to act quickly on a situation. Acting much like a pistol holster, slings allow you to have your rifle on your person with hands free security, which can be a huge benefit when hunting or training. The problem, is that with so many slings on the market, how do you know if you want to go single-point vs two-point, or two-point vs three-point? What's even the difference between types of rifle slings? Let's check them out.

Like the name implies, this sling attaches at one connection point on your rifle. Typically connecting on either the stock or end plate, this style of sling is the most “tacti-cool”, and is perfect for close quarters situations. The one point sling will allow the rifle to hang muzzle-down, and enables the shooter incredible range of motion, hands free movement, and when needed: rapid transition to shouldering the firearm.

Available in either one shoulder slings or double shoulder harnesses, this style of sling does a great job at mitigating the carry-weight of the rifle. 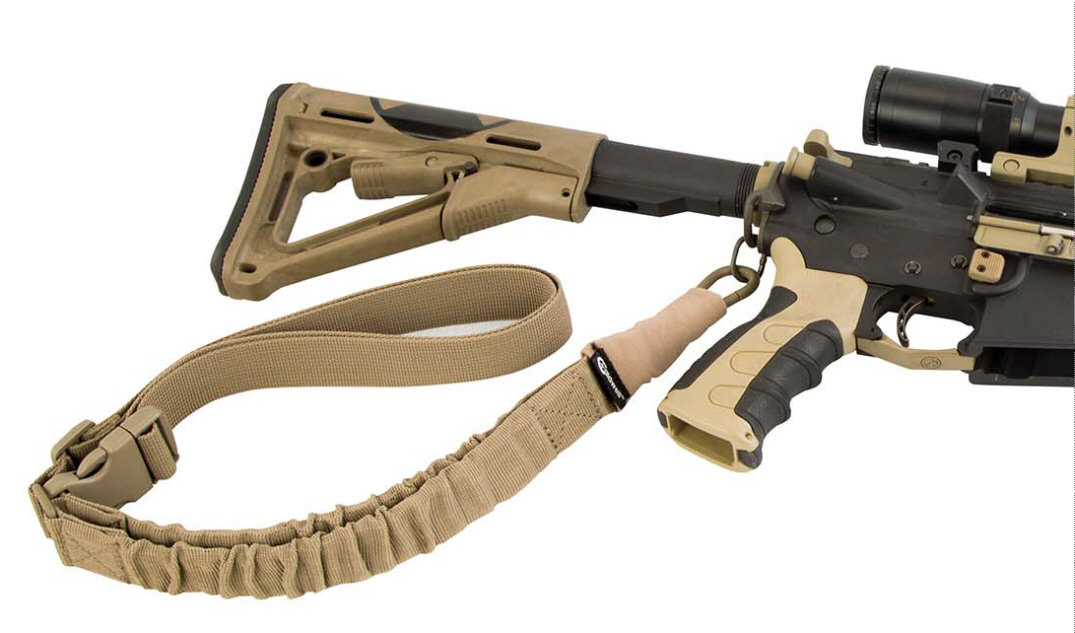 The single-point sling is by far the easiest to manage, and probably the most versatile.

- Allows the shooter the ability to move fairly un-impeded

- Easy and quick availability to the rifle

- Ability to hang the rifle in front, or push to your side for quicker movements

-Makes you look more skilled than you probably are

The traditional design of a single strap connecting to two points on the rifle, is as old as time. Connecting at the stock and handrail, this sling is made to carry your rifle on your back; usually over one shoulder.

However the modern design of the two point sling is designed to carry the rifle on your front. Still connecting at the stock and handrail; this two-point, single strap sling will leave the muzzle pointing down and the stock up near your dominant shoulder.

The forward placement of the gun allows you the ability to bring the rifle up quickly and accurately, using the rifle sling as a sort of guide. While the two point style sling does reduce your mobility a bit, it can be used as a brace for longer shots that demand extra stability.

-Keeps the rifle closer to the body when not being handled. More secure feeling than a single point

-Can be used to stabilize far shots for improved accuracy

-Less mobility when compared to the single point sling

-Getting the slack just right can be finicky and annoying

-Inability to shoot from either shoulder

You can very quickly end up looking like this guy if you don't know what you're doing with a three point sling.

One, Two, and you guessed it; the Three Point Sling is next. Basically a hybrid of the previous two slings; it has a strap to put your head and dominant shoulder through, as well as a loop that wraps around and connects to the AR butt stock.

As someone who has trouble tying his shoes and can barely count to 3, I’m not a huge fan of this sling option.. I find the spider web of straps to be confusing, restricting, and quite frankly just time consuming. While this sling does keep the rifle very close and secure to the body, there’s just a lot going on with the sling and I don’t see the risk to benefit payout here.

This Specter Gear Sling is one of the most common 3-Points on the market today.

-Much higher possibility of getting the operator hung, tangled, or stuck 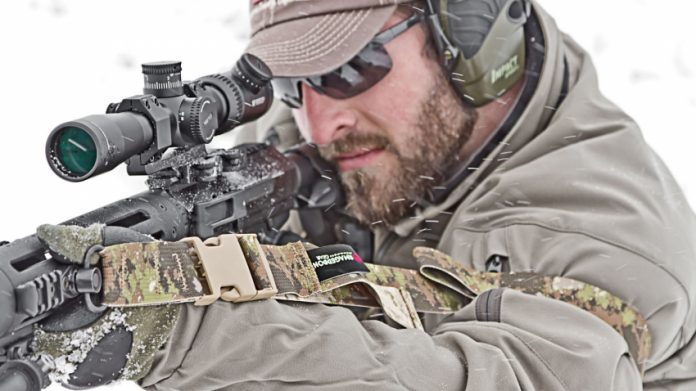 Whether it's for carry, or to assist in longer shots, I tend to prefer the traditional 2-point sling

Which AR15 Sling Should You Use?

So what type of sling best fits your needs? If mobility is important and long distance shots are few and far between, the one point sling might be the sling for you. If you do a bit more walking, enjoy a more secure feeling, and maybe make some longer shots; give the two point sling a try. However, if you want to completely over complicate a simple design, and possibly strangle yourself during use; the three point sling is definitely the sling for you!

In all honesty, slings aren't incredibly expensive. Buy a few and try them out, see what fits your shooting style and needs best. Getting the right sling really does make a difference, plus it’s an excuse to do some  firearm related shopping. Don’t sweat it if you’re not wild about the first sling you buy- worst case scenario is you wind up with an extra sling that you need to build a new gun for.