Choosing a handguard or rail system for your AR-15 can be a daunting task with so many great options available on the market currently. Choosing the right rail system is a very important decision to make when upgrading or building your AR-15 though, as it not only changes the aesthetics of your weapon, but also the functionality. Remember, the rail system is where many necessary and useful accessories will be mounted to your AR-15, so making the right choice requires careful thought and planning of what you want the weapon’s utility to be! Let’s dive into AR-15 rails and see what we can find out.

What Rail System is Best For Your AR?

We’ve gone through the basics, now we’ll need to sort out which rail system is best for your AR-15? To do that, we need to take some factors into account such as; budget, weight, aesthetics and most importantly function. Consider what accessories you need to attach to your AR-15 rail system and then go from there.

Most of us do not have an endless budget for our guns, so budget is a determining factor for quite a bit. Thankfully, you can get a handguard or rail system for your AR-15 to suit nearly every budget. From $29.95 for the Magpul MOE Drop-in to upwards of a few hundred for free-floating handguards you can find something that will work for your needs.

Budget - Magpul MOE Drop-in is an excellent choice for less than $30!

Better - 15” ATI Free Floating Handguard with MLok is a great choice if you can spend a bit more.

Best - BCM MCMR 15” Free Floating is one of the best handguards on the market. Rock-solid with plenty of mounting surface.

Weight is always something to consider with your AR-15. The weapon needs to be balanced well, and if you will be adding accessories to the front of your rifle you’ll want to make sure there is enough space on the handguard to spread accessories out so they are functional and well-balanced. Luckily, most free-floating aluminum rail systems are very light.

Aesthetics might not matter to many people but let’s face it - need the cred for the ‘Gram. There is no reason why you cannot have a handguard or rail system on your AR-15 that is functional and looks great too! Find a design that will work for you that is also easy on the eyes. Many cool styles are out there that look great while still providing functionality!

Obviously, your AR-15 rail system or handguard being functional is among the most important things to consider. Making sure there is enough real estate to mount all the accessories needed in many different positions and angles for comfort and functionality. Try to find skeletonized handguards to dissipate heat fast. Running a suppressor? Make sure your AR-15’s handguard has enough room to run it in your setup. Find one that fits your hand well and will allow you to mount accessories such as tactical lights in easy-to-use configurations.

Accessories make the gun right? What will you be needing on your AR-15 Rail? There are endless options for any mission requirement. This writer thinks having a light on an AR-15 is totally necessary for a home defense or SHTF scenario. Some things to look into:

One of the first decisions we will need to make is our attachment system. M-Lok Rail Systems are incredibly popular and the US Military Special Operations Command recently declared it the winner in impact tests, but that is not the only choice. KeyMod and Picatinny rails are also very popular! Let’s take a look at some options for your AR-15 rail system. 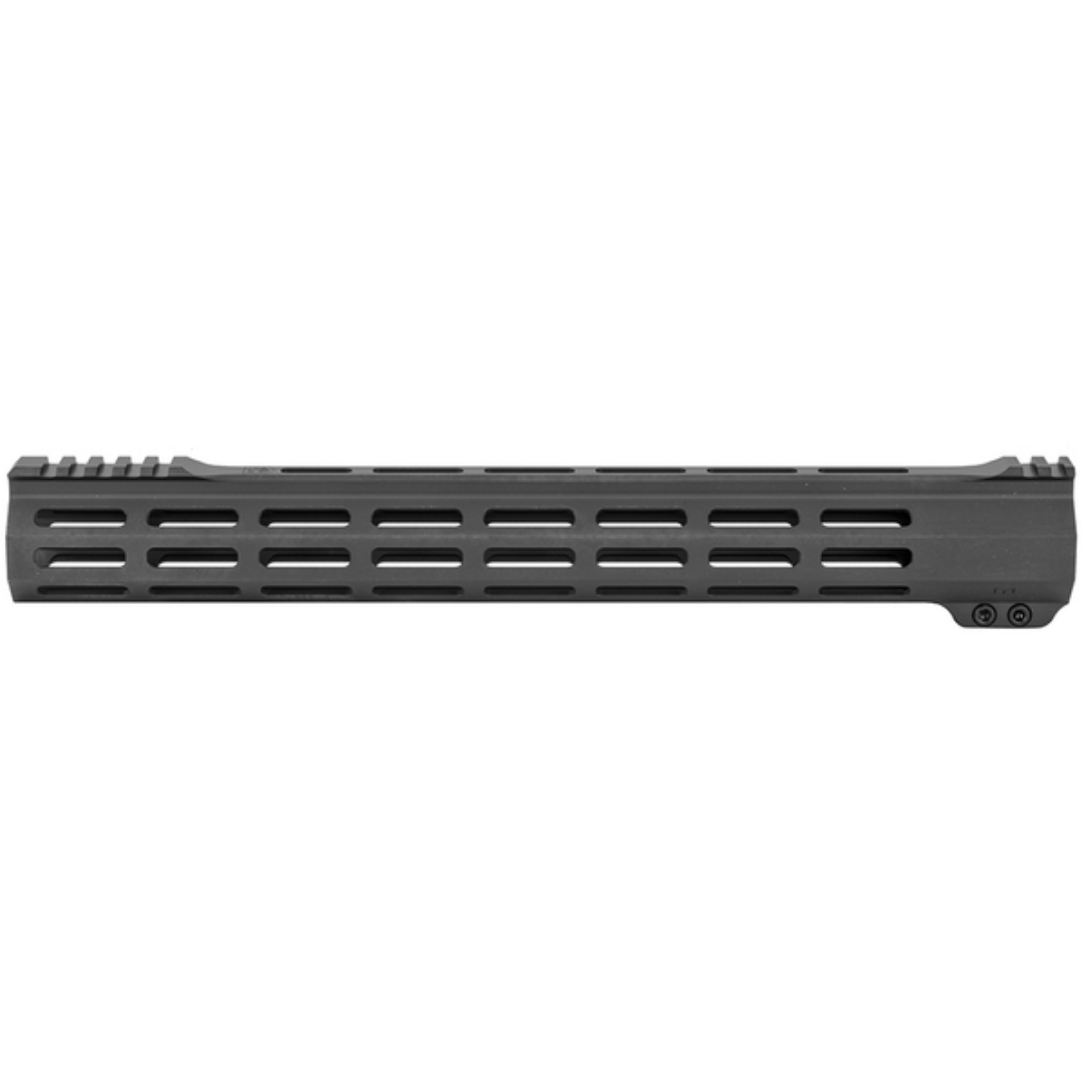 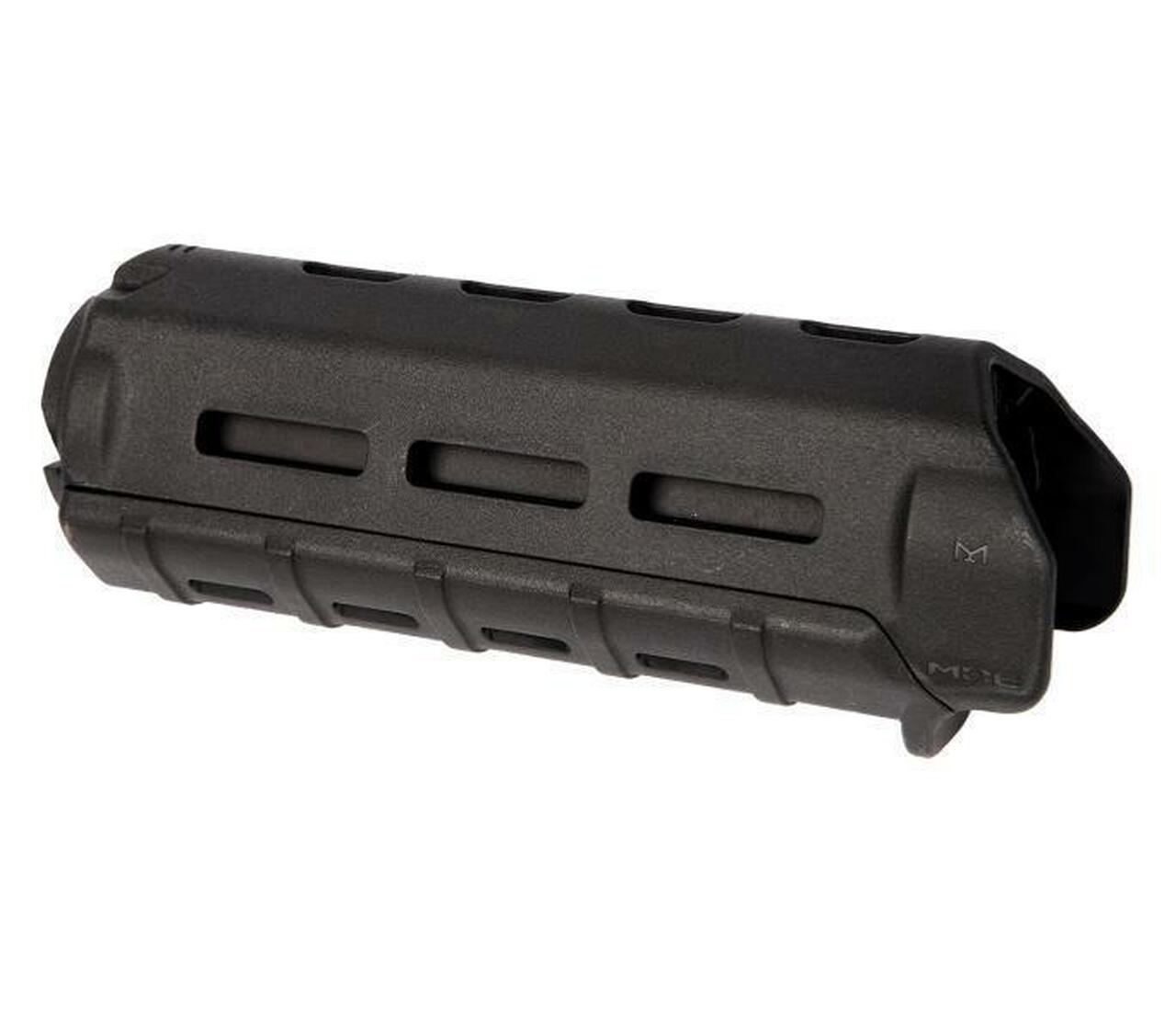 Drop-in railed handguards are also a thing. Typically, these drop-in rails are done with Picatinny attachment points and the most common type is called a quad rail. The quad-rail has four rails that run the length of the handguard. Usually, you do not want to mount optics on these rails because they typically wiggle around a little bit and you want your optic mounted very firmly. 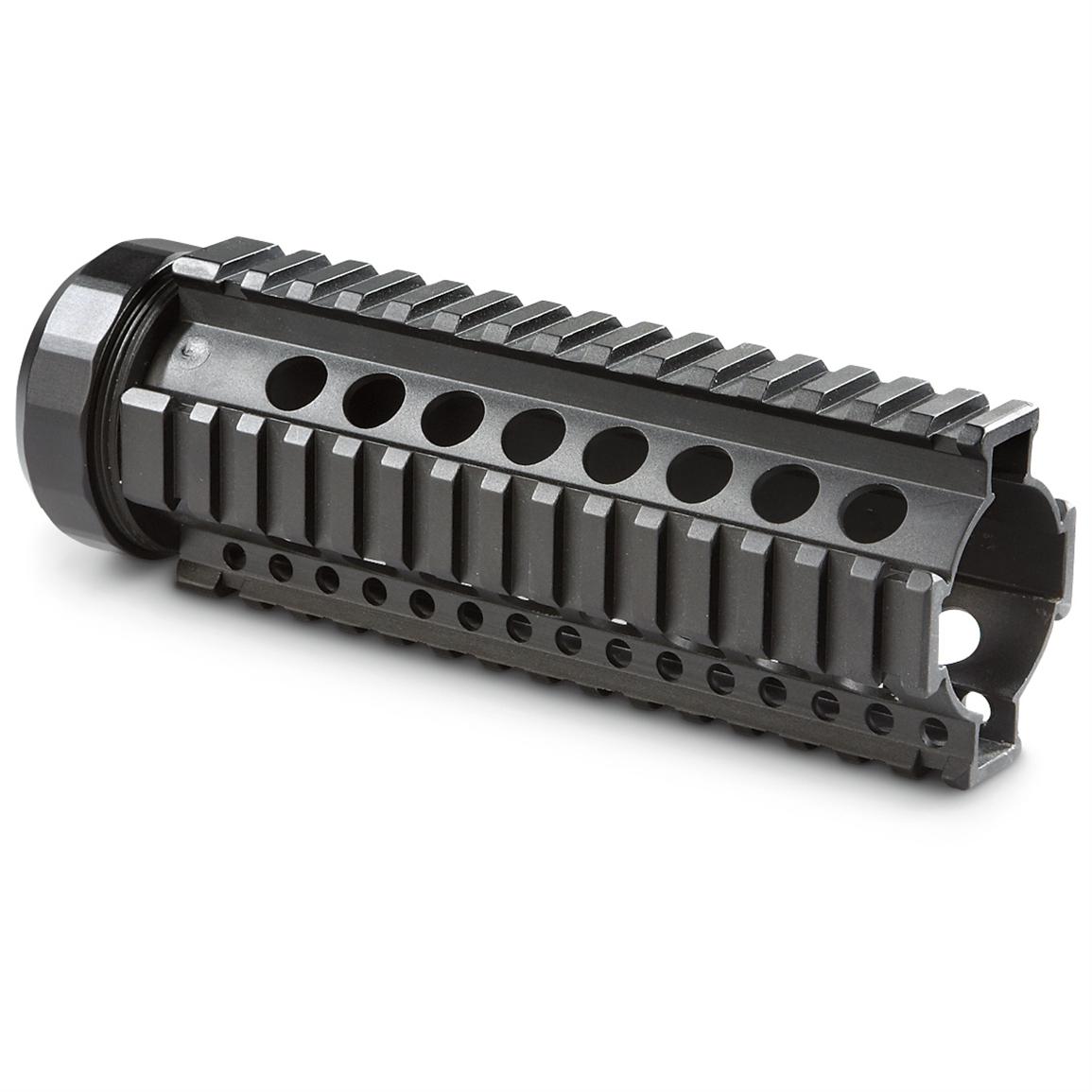 Free-floating handguards are another popular option when it comes to rail systems for our AR-15. Typically made out of aluminum instead of polymer, free-floating handguards offer better accuracy due to the fact that the handguard doesn’t touch the barrel of the AR-15, giving the barrel better harmonics, which results in slightly better accuracy. While that might sound ridiculous, think about it this way. When a bipod is attached to the barrel, it will create a force on the weapon when the weight of the gun is sitting on it, which can create a slight warp to the barrel. 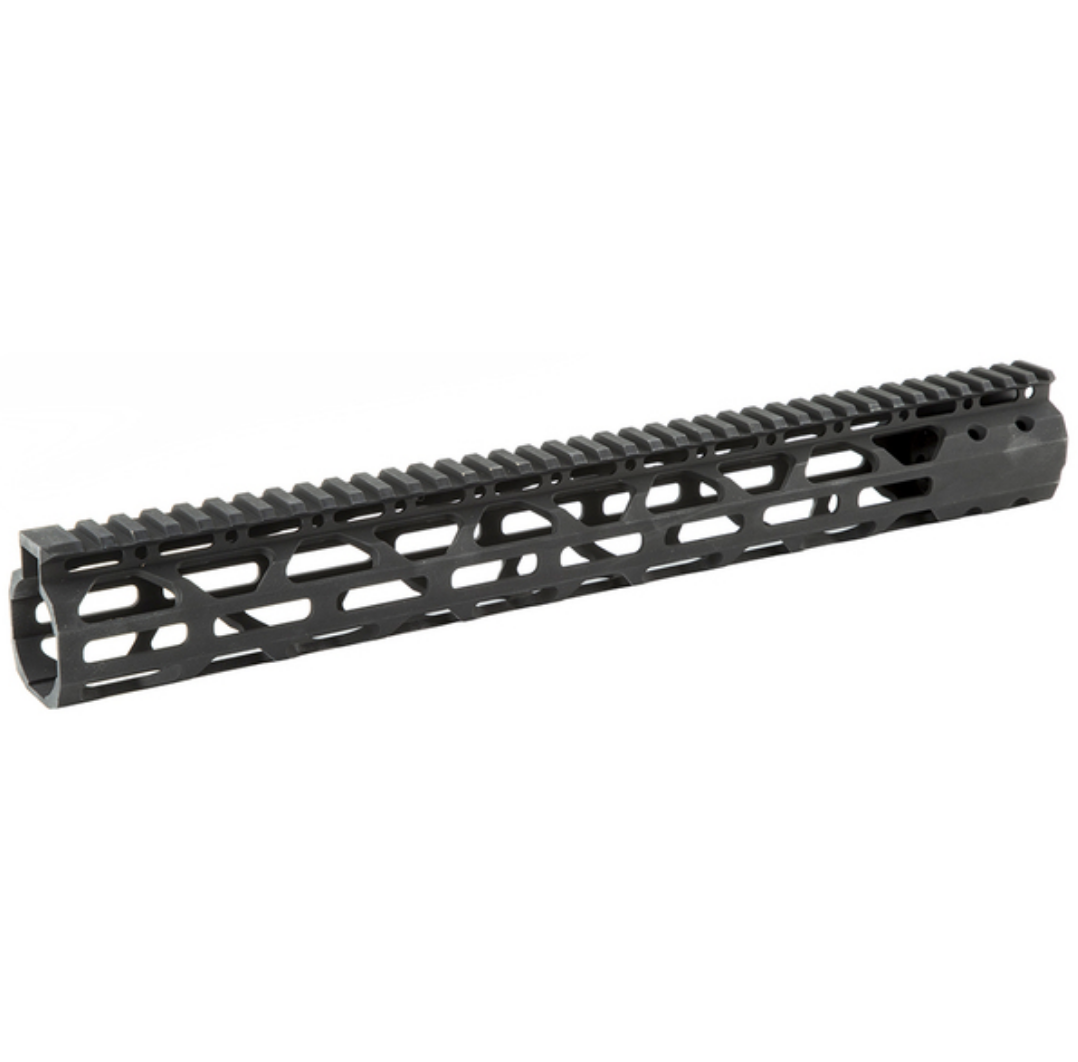 Free-floating handguards are an excellent choice for your rifle, but make sure you have a low-profile gas block so you can fit the handguard over it. This is an advantage in and of itself as it allows you (with the proper low profile gas block) to use a longer rail system, adding more real estate for accessories!

Picatinny rails are seen on a variety of guns, not just the AR-15. The name comes from the Picatinny Arsenal in New Jersey, which created it as a variant of the Weaver mount in 1995. Picatinny is standardized, meaning it will always be the same size. A Picatinny rail is essentially a strip of metal that has been undercut to create a T-shape, interspersed with flat parts that allow accessories to slide into place and then be tightened down. Picatinny rails are usually numbered so optics can be attached at the same point consistently. These rail systems are very common and seen on almost every AR-15 you will see. 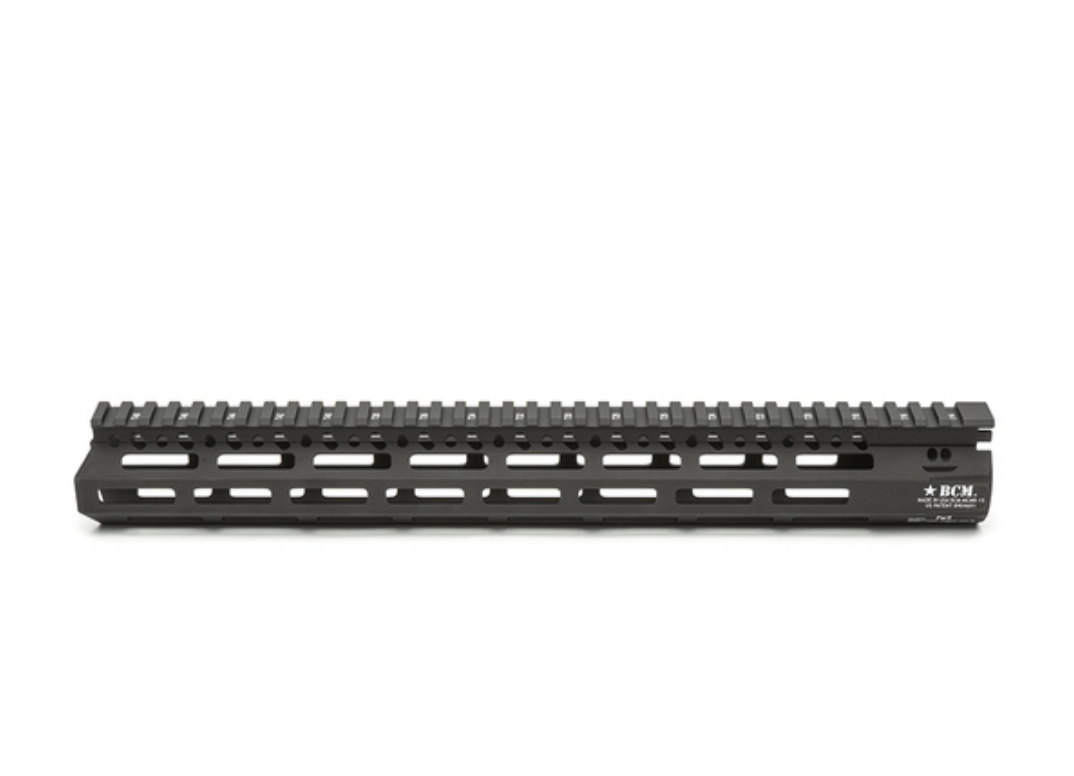 Picatinny is seen on top of this  BCM AR-15 M-LOK handguard.

KeyMod is one very popular attachment system for AR-15 Rail systems and handguards. KeyMod is easily identifiable from the slot shapes, which resemble? You got it, a keyhole! Simply insert the lug for your accessory through the bigger part of the opening and then slide forward into the narrow part as you tighten an allen screw to securely fasten the attachment. KeyMod allows for a self-alignment of attachments due to the design. This is a very popular system for the AR-15 rail, but there is far more support for the M-Lok system.

A KeyMod Locking system on an AR-15 handguard. (Source: Natchezss)

M-Lok is pretty much the standard as far as attaching accessories to your AR-15 rail system. M-Lok stands for “Modular Lock” and was invented by Magpul, who licenses the system to any company that requests to use it, ensuring that everything made with M-Lok has the same design and quality. To attach an accessory to an M-Lok rail system, simply slide the t-shaped nut into the slot, turn to tighten, and as you tighten it, the nut lays across the slot, locking the attachment down. As stated above, USSOCOM has recently released data showing the M-Lok System to be better for impacts, so you will feel as secure as your accessories trusting this system.

Upgrade Your Rails with 80% Arms Today!