As a female, I've tried many different options to conceal carry and some of them don't work for most female body types. So today we’re reviewing some of the best solutions for carrying concealed for women that are comfortable and readily available on the market today!

What is the best concealed carry holster for a woman?

Well as we go down our list of favorite products you might learn that the best concealed carry solution for a woman might not involve a holster at all. In our opinion the best women’s ccw holster is what’s most comfortable and what is most accessible. Does the gun impair any sort of basic movements or make you uncomfortable when walking or driving around? How fast can you draw your handgun from concealment? These are some factors to consider when researching which concealed carry holster to buy.

What is the most comfortable CCW holster?

Not every CCW holster is going to be the most comfortable so some research and experimentation may be required to find out what the most comfortable method for you to concealed carry specifically is. These are our personal favorites and what’d we recommend looking into (in no particular order): 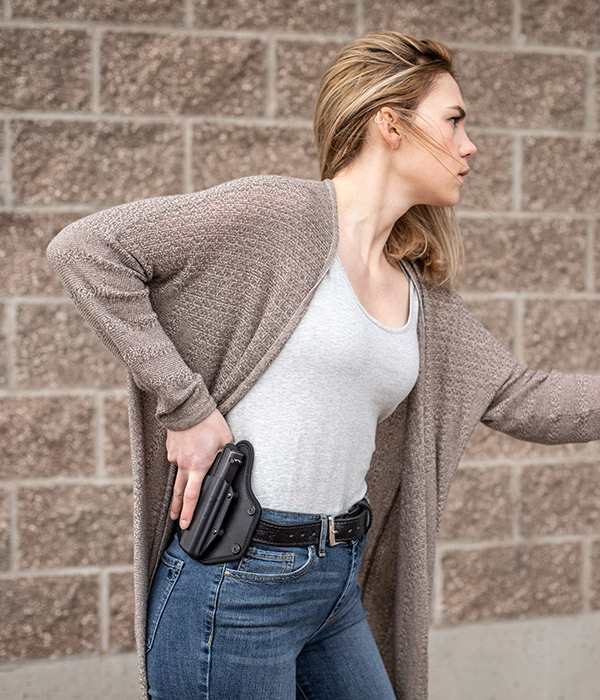 Womens fashion is an ever changing thing, as there are as many styles and trends out there as there are handguns. Be that as it may, on waistband holsters are actually our first choice for women concealed carrying. Unlike guys who have to use a big jacket, coat, or blazer to cover up an OWB gun, women have a bigger opportunity to utilize holsters on the waistband when paired with an oversized hoodie, large cardigan, novelty jacket, parka, or any coat really.

These styles tend to be quite long and more often than not will reach below the waist making an on-waistband holster quite easy to conceal. Outside the waistband holsters are great because they’re far more comfortable to carry as they won’t dig into your body the way an IWB holster would. The only real barrier will be in figuring out how to defeat the garment when drawing on the fly.

In the waistband holsters work for women just as well for women if not better. While most IWB holsters are made out of kydex, there are plenty of hybrid options online. These hybrid IWB holsters will typically have a leather or synthetic material backing that’s softer instead of kydex so that it bends and contours more to your body, reducing the amount of poking you get from your own gun.

Look I’ll just say it, the female figure is highly advantageous when it comes to in-the-waistband holster usage. Why? Well women don’t have to worry about accidentally shooting the family jewels in the event of a freak accident/negligent discharge. Additionally, if a looser shirt or top is worn, the chest creates this gap between the garment and the waist which means there’s virtually zero print. Men can really only achieve that with a suspiciously baggy shirt or if their pecs are yoked. Skinny people also tend to have an advantage in this area so it’s not necessarily a gender-based advantage. Any person who’s got a wider set of shoulders or larger upper torso in general and a smaller waist will have the same effect when it comes to appendix carrying. 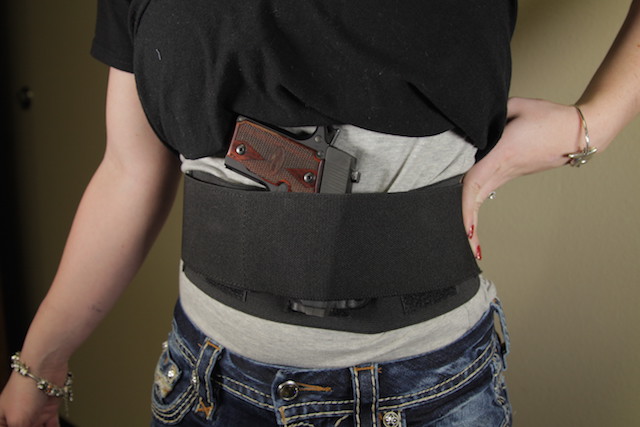 There have been a lot of new companies popping up recently offering belly band holsters which are great especially for working out or being used with activewear. One example can be found in what Crossbreed’s version of the belly band holster which allows you to carry not only a spare magazine but also additional accessories such as your phone or wallet. A lot of different companies make them but they’re generally all about the same. Highly effective in conceal carrying but depending on the person, it might feel a bit suffocating to have that velcro-strapped band tightly wrapped around your stomach with all that weight. 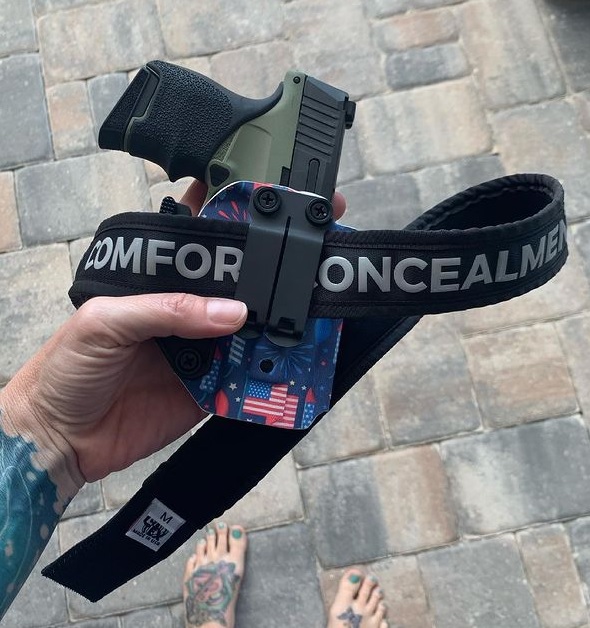 Enter the Comfort Concealment Band. This is like the evolution of the belly band holster. Rather than wear a physical belt on your pants (not all women's pants have belt loops) this is the optimal choice for almost any situation. It's only two inches in width but this thin and not bulky band makes it possible to comfortably conceal any IWB holster with just about any handgun and still not print! For IWB holsters have too large of clips to work well with this band we’ve Crossbreed’s Ulti Clips work exceptionally well with the comfort concealment band. For some great examples of how owners have used this combination check out Comfort Concealment Belt’s Instagram page. 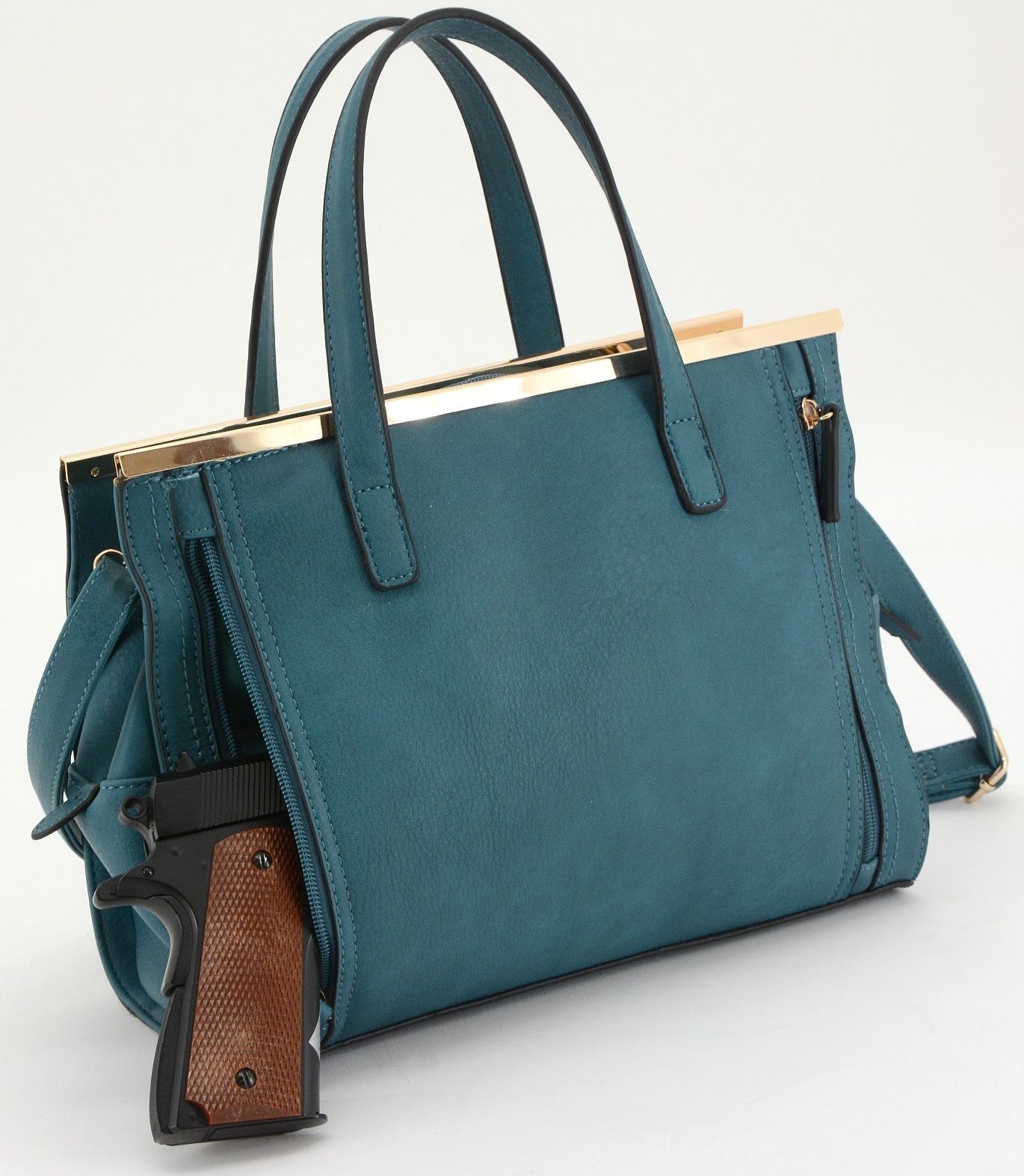 It’s an obvious and classic choice, no? Except today we have ways to really make the modern purse work for concealed carrying. Some concealed carry purses are actually quite fashionable and will have compartments that may have work and fit for certain handguns. Jessie James has a line of concealed carry bags including shoulder bags, crossbody bags and handbags. We prefer to still pair a purse with an IWB holster so that the trigger guard is well protected and we’ll have the peace of mind that there won’t be any ND’s coming out of that Louis Vouitton bag.

We think the Crossbreed Holster’s Ulti Clips are also the answer for best combination of IWB holsters and everyday purses or bags being used to concealed carry handguns but they also have concealed carry purse inserts that use a kydex holster secured by a velcro panel. So if you have a bag which this can be mounted to it is definitely worth taking a look at. The biggest risk of using a purse to concealed carry is if you lose the bag, or if it gets stolen off of you. Say you do get mugged, that wouldn’t be as big of an issue if you were concealed carrying on your own person. 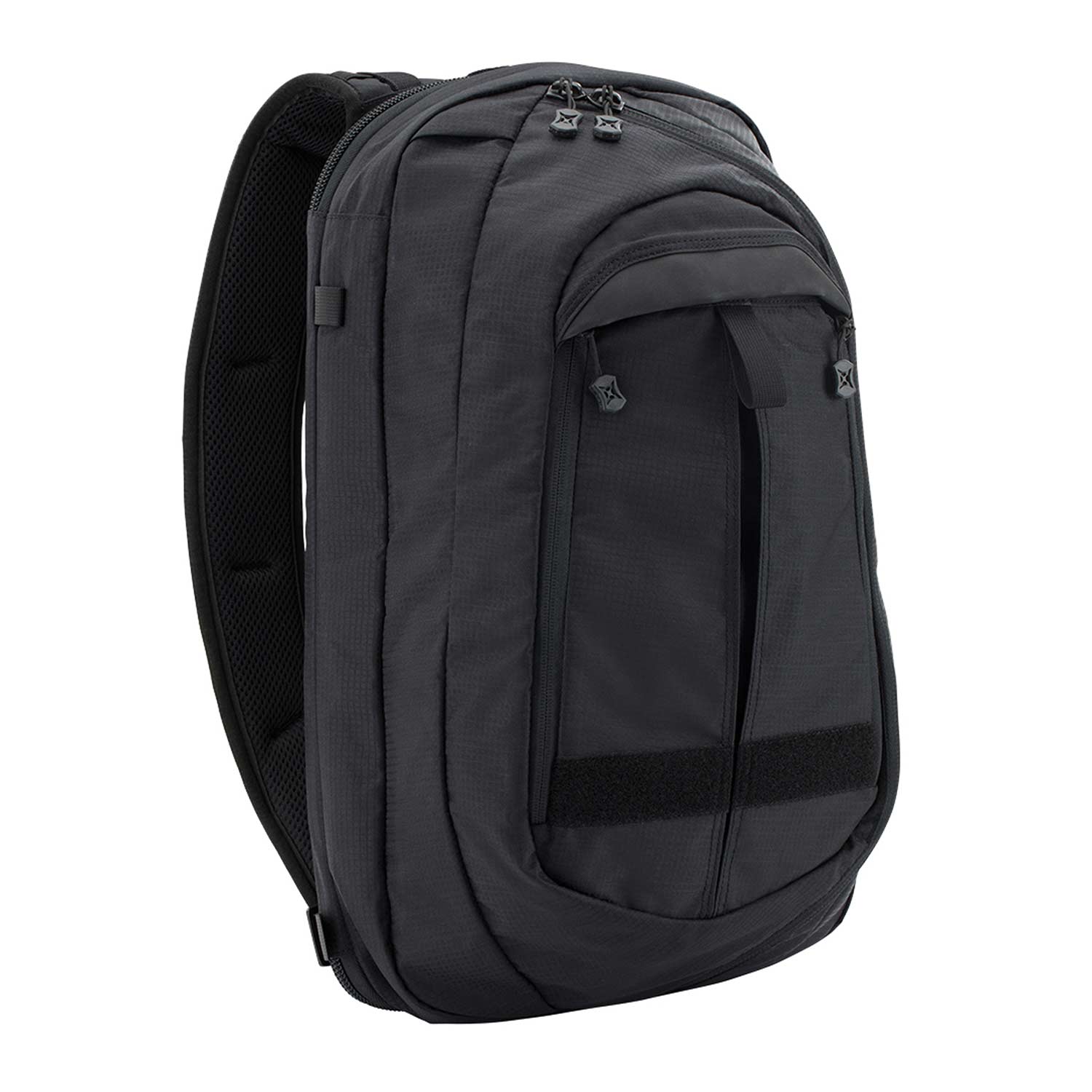 Perhaps you’re a student or carry so many things on an everyday basis that a backpack makes more sense for you. Lucas from T-Rex Arms made it a point that you could easily concealed carry a short AR pistol or a pistol caliber carbine in a backpack from Costco, it really just comes down to practice and your familiarity with the bag to be able to quickly access whatever guns you’re carrying.

Vertx makes some really cool bags and backpacks that were expressly designed for concealed carrying guns. Their bags are known for large zipper tabs that make it easy to swing the bag from around your back and quickly unzip to draw your gun out. But they don’t come in the best looking colors which actually makes them stick out a little bit. Anytime a backpack has MOLLE webbing or velcro on it in that fashion it’s kind of obvious that it’s not a normal bag (or maybe we’ve just been more exposed to these products than most people).

If a concealed carry backpack is what you’re looking for, we recommend Vertx’s Commuter Sling 2.0 which is a single strap backpack that actually comes in low key colors perfect for blending in at work, for commuters, and even students.

CCW Holsters WE DO NOT Recommend

Among the many holster options out there these are the ones we are absolutely against: 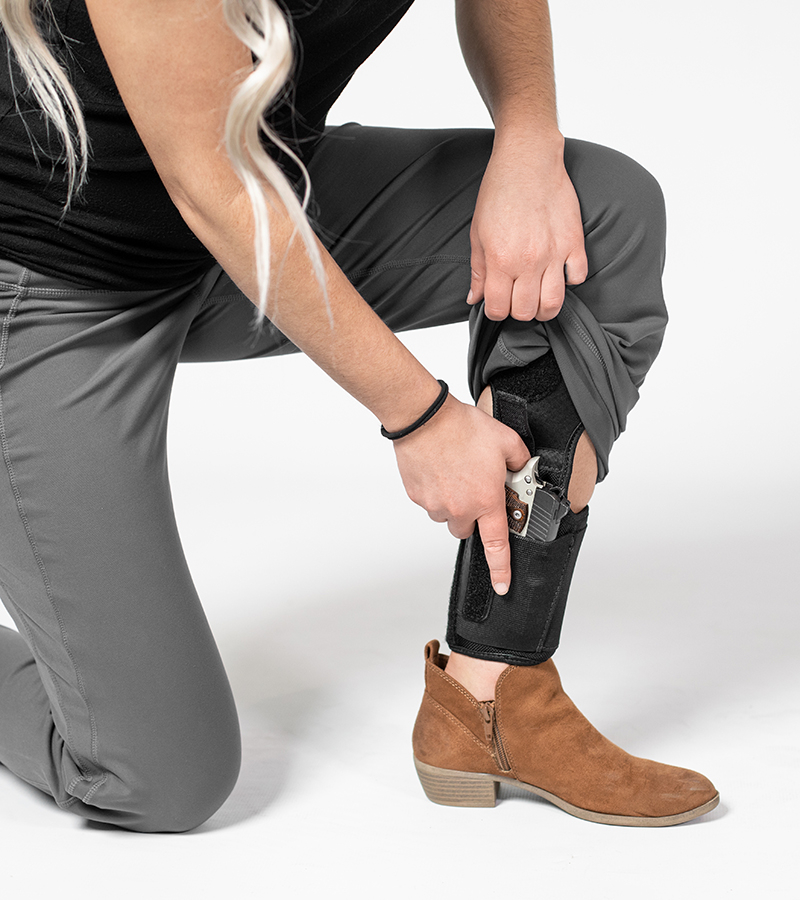 Even if you were able to find a “good” ankle holster it’s just not easily accessible. You’d have to put your leg up or bend down to get it which would take significantly longer and more effort than drawing from an IWB holster, OWB holster, or bag. Also, it’s quite difficult to conceal. Unless you’re using a tiny gun, there’s going to be a weird bulge in your pant leg. Not to mention, you can only wear pants to conceal an ankle holster. The only garment that could 100% cover an ankle holster might be a very conservative maxi dress but even those tend to show off the legs or ankles. 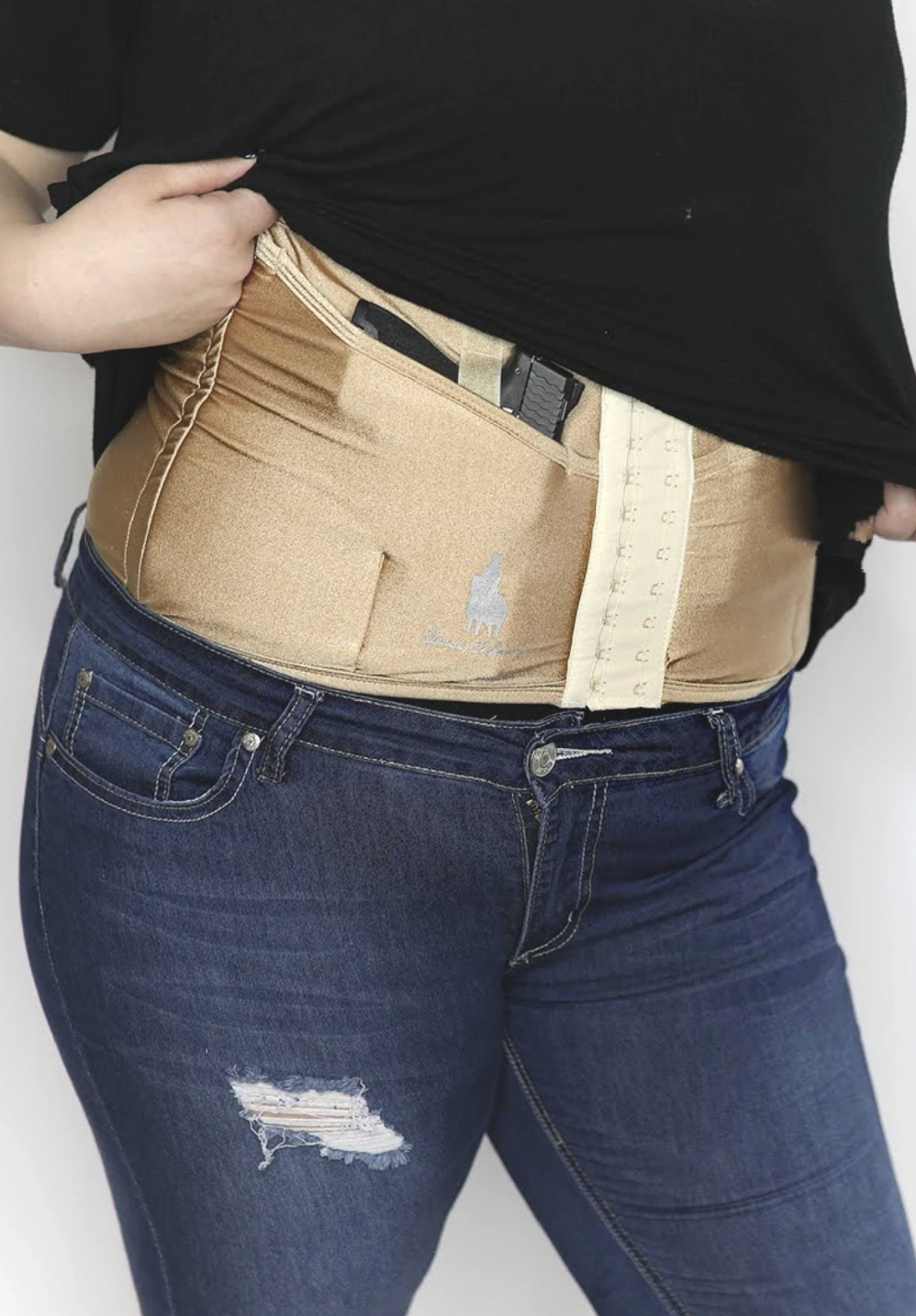 Corset holsters work in the same way belly band holsters do except that they work to accentuate your figure. We’d take a belly band over a corset holster because from what we’ve seen, the corsets just seem to have too much material blocking quick access to the gun. In this case this holster style seems a little too concealed. 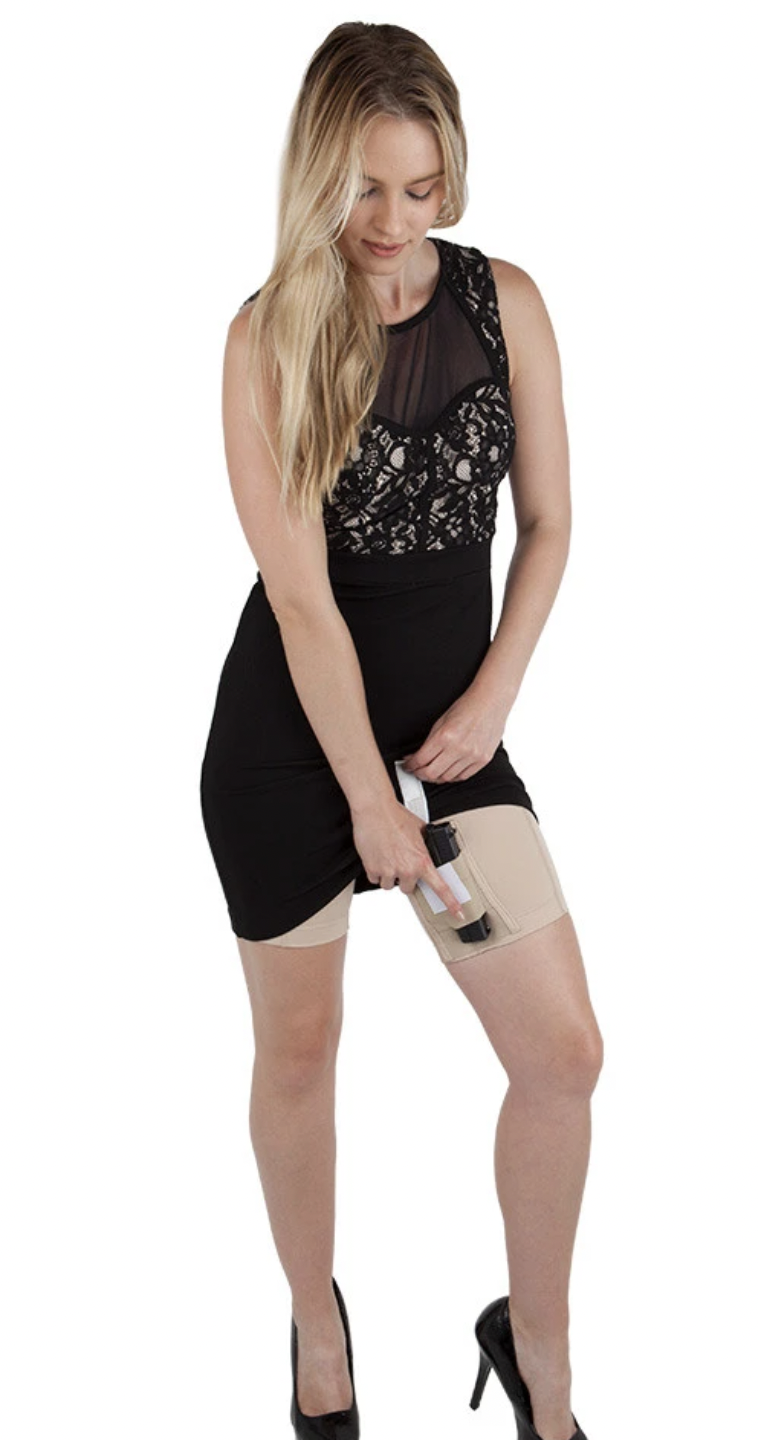 As sexy as the idea may be, unless you have amazon/model-like legs I just don’t know how you’d be able to carry a respectable handgun between your legs without scratching or cutting your other thigh up. Imagine if you were using a hammer fired gun… ouch.