“OWB” stands for on or outside the waistband holsters. OWB kydex holsters (we won’t be discussing leather holsters or hybrid material options) today are quite customizable and can be positioned virtually anywhere on your belt or even tactical gear like a chest rig or plate carrier which is very convenient. You could also easily conceal some on waistband holsters as well in the colder seasons with a nice jacket or hoodie, in fact, people have been doing that for decades.

What is an OWB Holster?

Outside waistband holsters are typically for open carrying purposes and can often be seen on law enforcement officers’ hips for their duty guns. While these on waistband holsters can be positioned at basically the same positions IWB holsters can, they are usually at the 3 or 9 o’clock position on the hip depending on the dominant hand side.

Who makes the best OWB Holster?

For years, OWB holsters have been made out of leather or cheap synthetic materials. In the past couple of decades holster technology has seen exponential growth in kydex molds making for more secure platforms and very fast draw times. There are definitely some weird holsters out there that you should avoid so today, we’ll review some of the best OWB kydex holster for Glock 19 and Glock 17 pistols when it comes to outside-the-waistband holsters. We focus on holsters compatible for the Glock 19 and Glock 17 because our GST-9 Frame can be built out to be similar length setups. The following owb kydex holsters have also been tested in-house to ensure compatibility with different GST-9 builds: 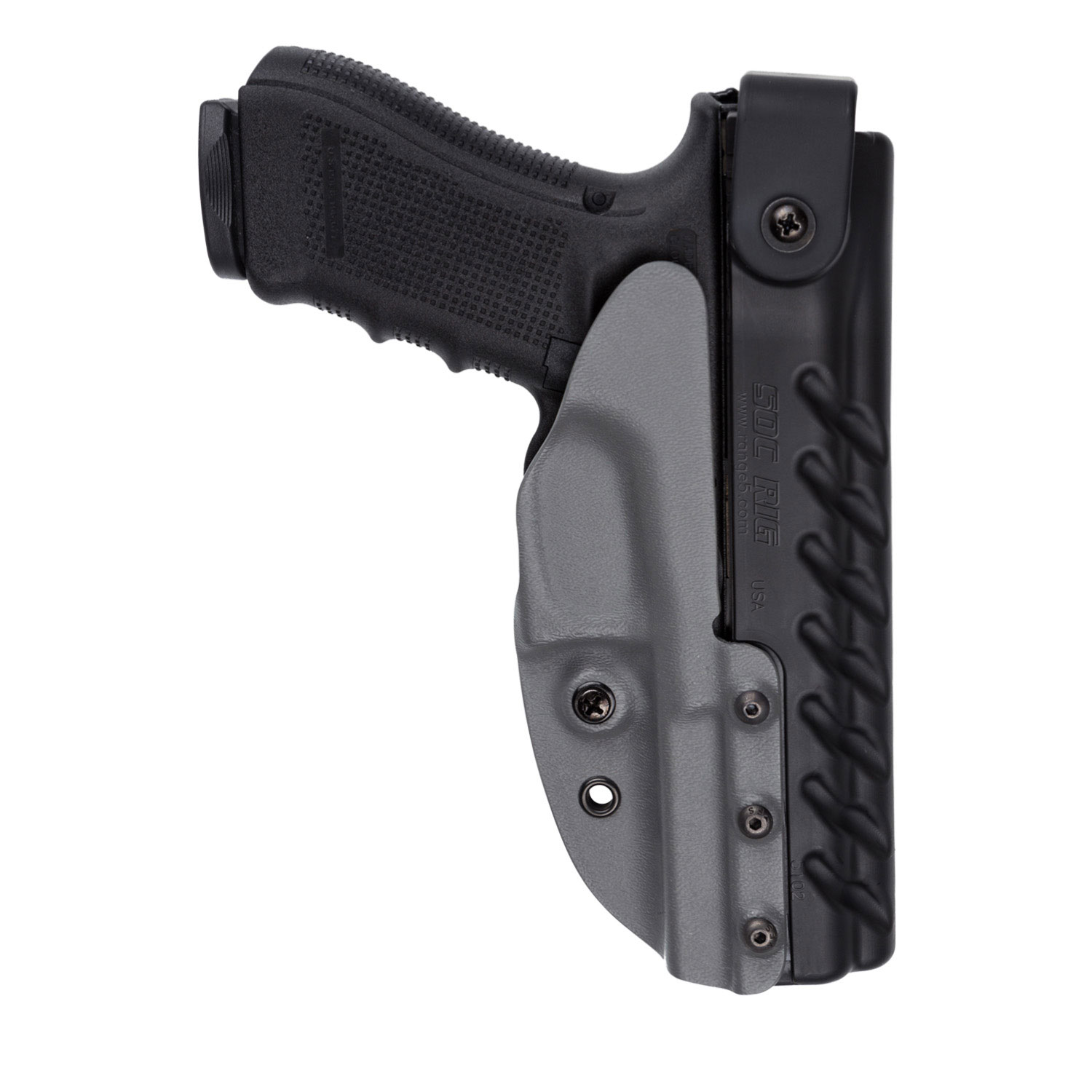 G-Code Tactical Holsters have been in the business of making holsters since 1997 and are a staple in the law enforcement and military community. These holsters have seen plenty of action from the War on Terror to the local streets in your neighborhood as they boast a crisp and clean break on the draw with a secure, no rattle carry no matter which handgun model you are using. Not a lot of brands can say that. We can confirm that the GST-9 frame is not only compatible with G-Code holsters, but fits great just as any Glock handgun would.

G-Code’s name comes from two main features. The ability to holster pistols with tactical lights on them and their patented RTI adapter. Before police officers were able to holster their pistols with weapon lights, it was more standard for them to hold flashlights in their off-hand with the famous Maglite brand, whose long-running flashlight doubled as metal batons, used to be commonly found at Costco. Not that officers don’t use standalone flashlights, but at least with weapon lights you get to reduce a lot of weight on the duty belt and strain on the wrist from using basically a dumbbell for a flashlight. G-Code has also had a cool collaboration with Haley Strategic before. 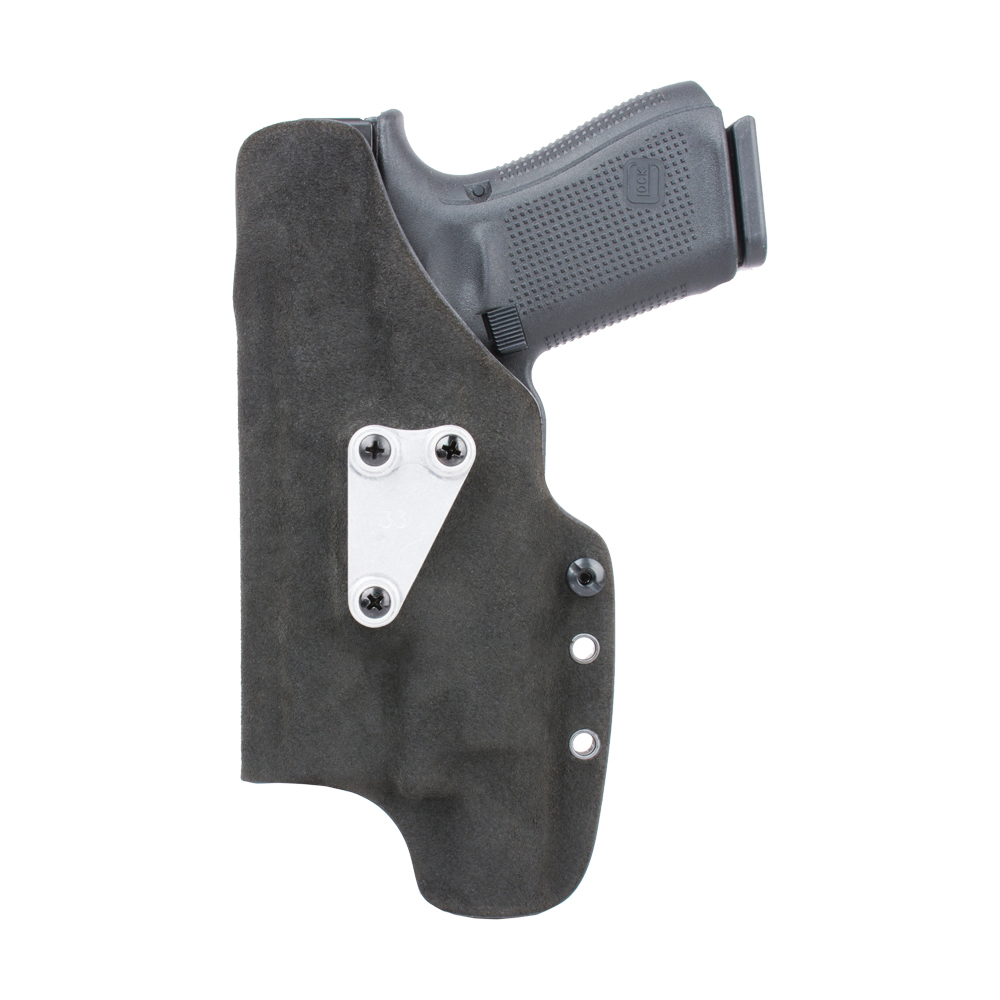 The RTI adapter was arguably the first modular solution for pistol holsters. There are a variety of situations and types of holsters that may suit many different professional needs. Prices of holsters can really stack up and shipping for them is never like Amazon Prime as lead times are usually 4-8 weeks. So the RTI platform utilizes a three-prong system which can hook into a variety of RTI adapters. Have one holster you really like? Instead of getting several expensive holsters, you can just buy multiple adapters as needed. Even if you are looking at other smaller custom holster making companies, they will almost certainly offer you the option to choose an RTI adapter among the other one or two options to be considered as an industry standard. 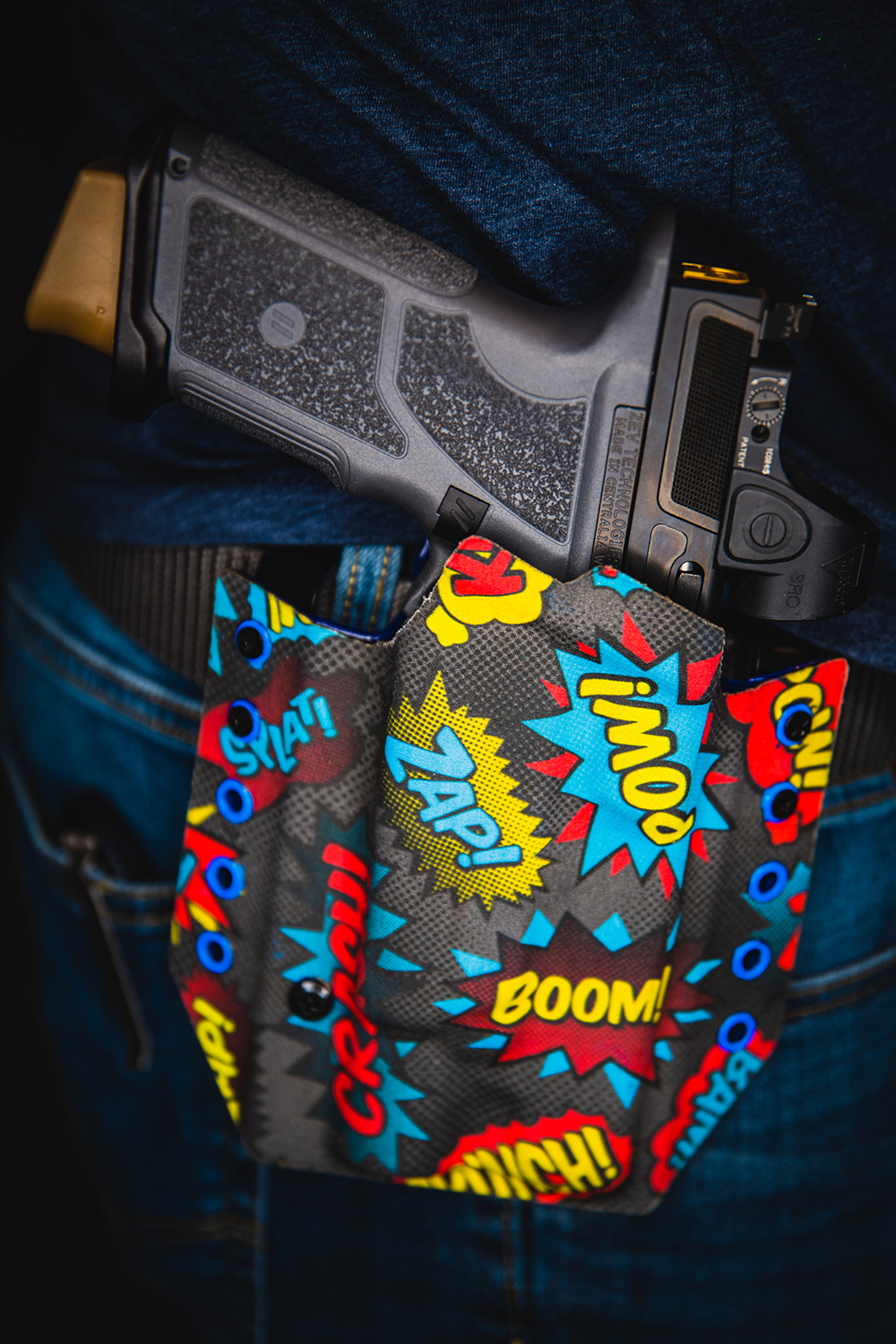 We mentioned Quick, Violent, Over, in our best IWB holsters for concealed carry blog and are bringing them up again here for good reason. Among the many smaller custom companies that have risen up over the more recent years, QVO Tactical holsters are among our favorites as they make some of the best owb kydex holsters in the biz. Compared to other competitors, their holsters use really thick kydex with multiple layers that is durable and just feels so substantial. When building out a custom OWB holster with QVO, you are given one of three mounting options which is to use G-Code’s RTI system, Safariland’s Q-Fork system, or a standard paddle provided by QVO.

The standard paddle provided is already extremely comfortable and has a notched area which allows for the belt you’re wearing to securely sit in but if you’ve already committed to G-Code or Safariland, it’s very convenient that their hardware is also compatible. QVO makes some really fun and high quality designs so it’s great to be able to have a custom holster while still being able to utilize pre existing gear in your closet.

Last but not least, is Safariland. We saved these guys to talk about last because they are, in our opinion, the best OWB kydex holster making company in the world today. As one of the leading industry standard companies for holsters, Safariland makes outside the waistband holster products for duty purposes, civilians, and competitors alike.

The mounting system used by Safariland is what we’re calling the Q-Fork (not official name). It’s a similar concept to what G-Code does with their RTI adapter but instead uses a polymer three-pronged fork to go into Safariland’s array of adapters or holster attachments. The technical term we’re referring to is what Safariland calls the quick locking system or “QLS.” It can be a little confusing because there are other locking systems put out by Safariland that are different shaped forks such as the tactical molle adapter (TMA), equipment locking system (ELS), or molle locking system (MLS).

We think Safariland holsters are a little bulky but are well worth it for how flush they sit next to the body regardless if they’re mounted on a belt or a drop leg kit. G-Code is far less bulky but sometimes can sit a little far away from the waist or the leg. The further the gun is from the body, the more uncomfortable it is when running as the gun and holster will shake around even more. Most importantly, there isn’t a faster level three holster on the market that can beat Safariland’s QLS holsters for Glock handguns. With G-Code’s XST RTI holster, you have to defeat a bulky button by pushing it down to drop back the retention canopy. It’s doable, but the small button on Safariland’s QLS holsters is much faster and easier to get that quick and snappy draw. With G-Code’s XST line of holsters, if you move too fast and don’t push down hard enough you might fumble with the pistol as it gets stuck on the retention canopy. That would never happen with Safariland which is why Safariland is at the top of our list. If you’re a police officer, we would highly recommend this company for your duty gun as they probably make the best owb holster for Glock 17s.

That being said, Safariland’s kydex holsters are very specific so if you order the slightest option that makes it “off” it may not be a perfect fit for your sidearm regardless of brand and model. Pro tip: if you run a weapon light, make sure you select that light’s model in the options which could help a lot in creating a crisp seal over your gun because light bearing holsters typically grab on to the light more than they do for the frame of the pistol.

Pros and Cons of OWB Holsters

OWB holsters are similar to IWB holsters but will primarily serve in different roles and functions. Here we look at some of the pros and cons of outside waistband holsters:

It’s not going to be perfect, but at least for getting into vehicles and sitting in cars, OWB holsters are far more comfortable to live with than IWB holsters are. They might bump into the seat belt or get pretty close to your shifter but at least it’s not digging into your belly. There’s also far less risk of shooting yourself with an OWB holster.

With the way holsters are made these days, they can be used in more ways than one. IWB holsters are strictly going to be in your pants. There’s really no other way to use them. But OWB holsters can be attached to a variety of adapters allowing your favorite pistol to be mounted virtually anywhere.

The biggest con to OWB holsters is probably the limitation of CCW laws. Depending on where you live, local laws and ordinances may not allow for the use of OWB holsters for the purpose of carrying concealed. While it’s certainly possible to conceal with OWB holsters, it’s definitely more difficult to conceal and easier to accidentally expose your gun to unsuspecting people. We never want to alarm people by letting others know we are armed unless absolutely necessary.

Other than that, as cool as OWB holsters are, unless you are in law enforcement or a deployed part of the military, when are you ever going to get to use it? Probably not as often as you like.