If you’re in the market for an LPVO, it goes without saying that you’d want the best glass that you can afford. But before we get into the best lpvo for you, there’s another question we have to answer first: Do you choose an lpvo with first focal plane or second focal plane? We’ll get into all of that in this article today.

What is an LPVO?

So what is an LPVO? LPVO stands for low powered variable optic. Essentially, it’s a scope that allows you to adjust the magnification power from 1X to something higher. The most common lpvo power ranges go from 1X to 6X, 1X to 8X and 1X to 10X. 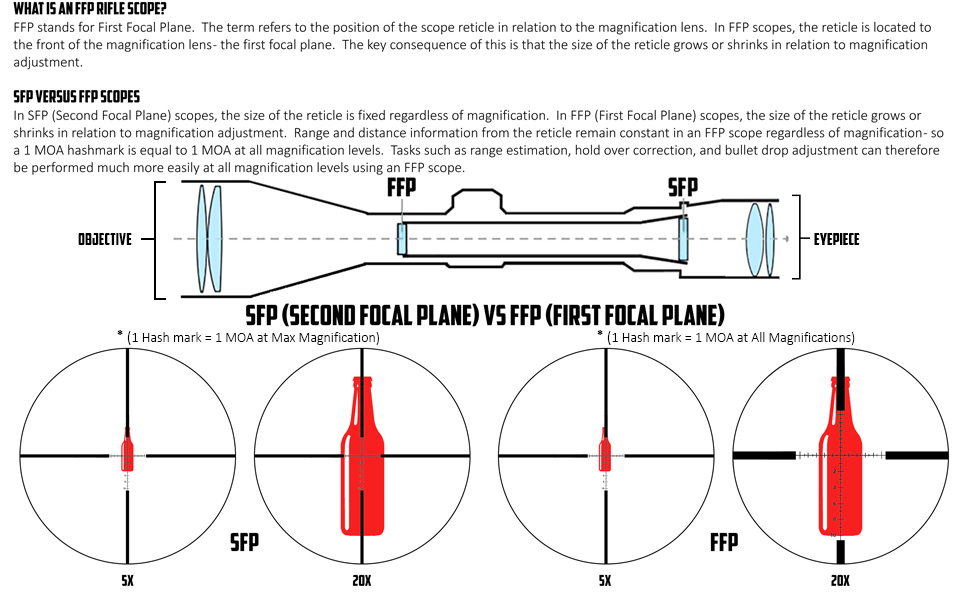 What is First Focal Plane?

One way to help you better understand first focal plane vs second is to remember ‘FFP’ as ‘front focal plane.’ Take a look at the image above and you’ll see several pieces of information. Notice where in the figure it says ‘objective’ and ‘eyepiece.’ The eyepiece is the rear part of the scope closest to your eye. For a first focal plane lpvo, the reticle is placed on the plane (magnification erector assembly) furthest away from your eye and closer to the front of the scope.

Great, what does that all really mean? Based on where the reticle is placed it will give you a different focusing and aiming experience with your lpvo. For first focal plane optics the reticle will change in size in correlation with which power magnification you are using. The higher power you go, the larger the reticle will appear. As you reduce magnification, the reticle shrinks in size. At 1x power the reticle is barely visible and that goes for the illuminated red dot as well (if the lpvo has one). Another caveat is that at max power, the reticle may become so large and thick that it could cover up the target in an undesirable manner (depends on manufacturer and model).

Generally speaking, the common trend for most shooters is to buy FFP scopes. The more accurate answer is that FFP is not necessarily the better option but it is certainly the more easy and convenient one. A lot of critics will say that using high quality FFP scopes will improve your shooting and chances of acquiring a target faster. Why is that?

The reason for that is because with a first focal plane lpvo, the mil dots or holdover marks on a FFP scope's reticle will remain accurate no matter what magnification power you are using. This means that, depending on the reticle type you’re using, there is little to no calculations ever needed while aiming. That’s why competitors and hunters alike will often choose FFP LPVO’s over a SFP.

What is the best first focal plane scope? 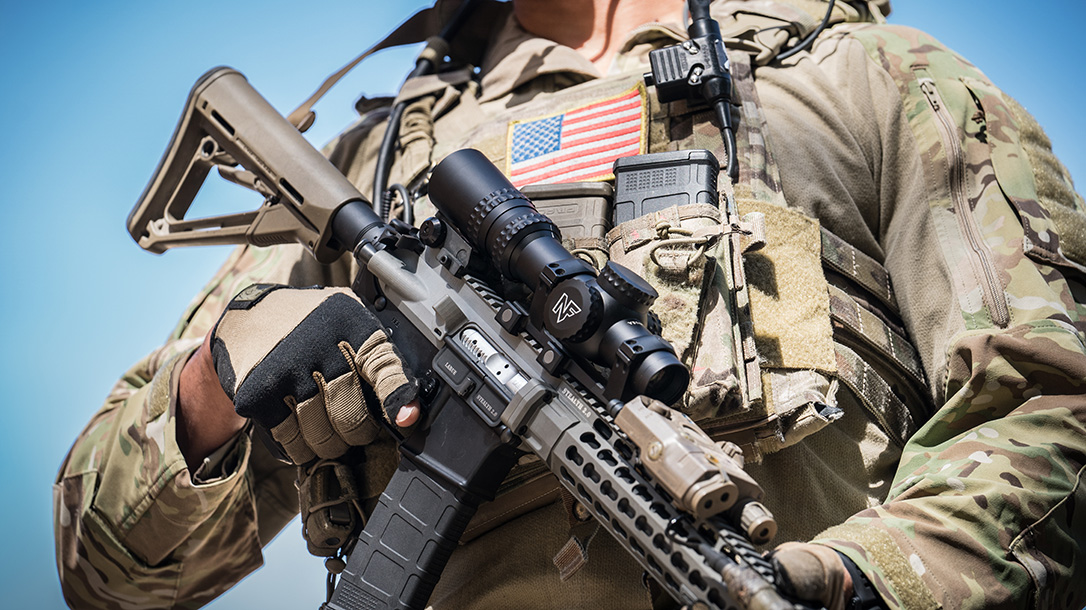 It’s a tough call but we would say that a couple of the best first focal plane lpvo scopes include the Nightforce ATACR 1-8x24 or the Vortex Razor HD Gen III 1-10x24. We wouldn’t consider any 1X to 6X lpvo as the best because with a larger optical range, the clarity of being at 6X on the aforementioned ATACR or Razor is just that much clearer than a lpvo that maxes out 6X.

What is Second Focal Plane?

With a SFP lpvo, unlike with a FFP lpvo, the reticle maintains the same size no matter which power magnification is being used. How does that translate to your shooting experience? Well, with SFP, it means that your reticle’s hold off marks are only accurate at a designated power set by the manufacturer so some may see that as a major losing point.

However, SFP glass is typically clearer and has less distortion at higher magnifications. Something rarely talked about, if ever, is that SFP lpvo users also get to enjoy a brighter red dot compared to FFP lpvo scopes which aids in faster target acquisition at short distances. More importantly, if you simply remember your holds at each magnification, the accuracy of SFP hold off marks becomes a non-issue. So definitely don’t disregard SFP LPVO’s as an option while you’re shopping around as it is a more than viable option.

What is a second focal plane good for?

Optics manufacturers market second focal plane LPVO’s as good options for low-light situations such as hunting or scenarios that don’t require you to use hash marks for range estimation. There’s definitely some wisdom in that — take a look at the image above. That’s the (MOA) reticle of the Vortex Razor HD Gen III 1-10x24 FFP lpvo scope.

Notice how there are several numbers next to all the holdover marks? Well these sort of reticles aren’t used with second focal plane LPVO’s since those numbers and mil dots would only be accurate at one of the power magnifications set by the manufacturer. As information that is only accurate at one of the scope’s settings it just wouldn’t make sense for a SFP scope to use that kind of reticle. Most SFP lpvo’s will use a reticle similar to the one in the image below.

If you’re shooting with an AR-15 or an AR-10 at targets inside of 500 yards, the second focal plane LPVO is going to work perfectly. That being said, SFP optics have traditionally been used by hunters the most.

Is the second focal plane better? 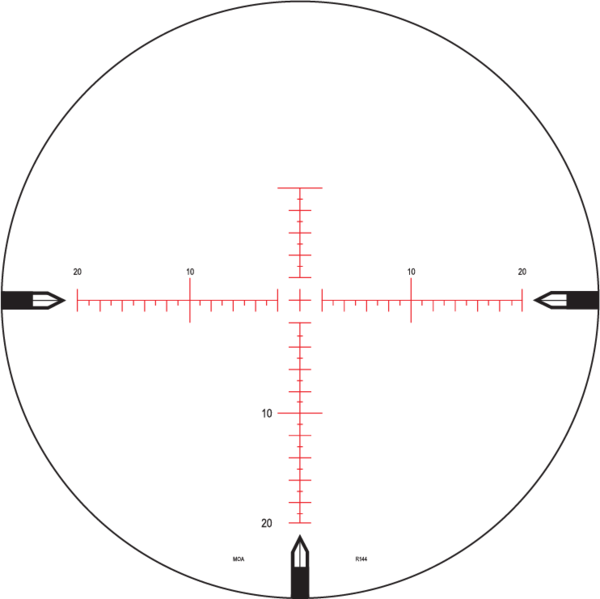 “Better” is such a subjective unit of measurement. Every shooter is going to have a different set of deciding factors for what type of lpvo works “better” for them. If the reticle changing in size bothers you in FFP scopes, then a SFP scope might be more suitable to your preference. When it comes to first focal plane vs second — If you venture into long distance and precision shooting but don’t mind doing some quick conversions for calculating accurate MOA for the reticle’s hold off marks then SFP is going to work for you. For those that don’t want to be doing any math or extra critical thinking then SFP may not be for you. While higher quality (really depends on price range) FFP lpvo’s may not have this issue — some SFP lpvo’s can be just as effective, if not more, in close quarters situations since SFP scopes tend to have brighter red dots.

What is the best second focal plane LPVO? 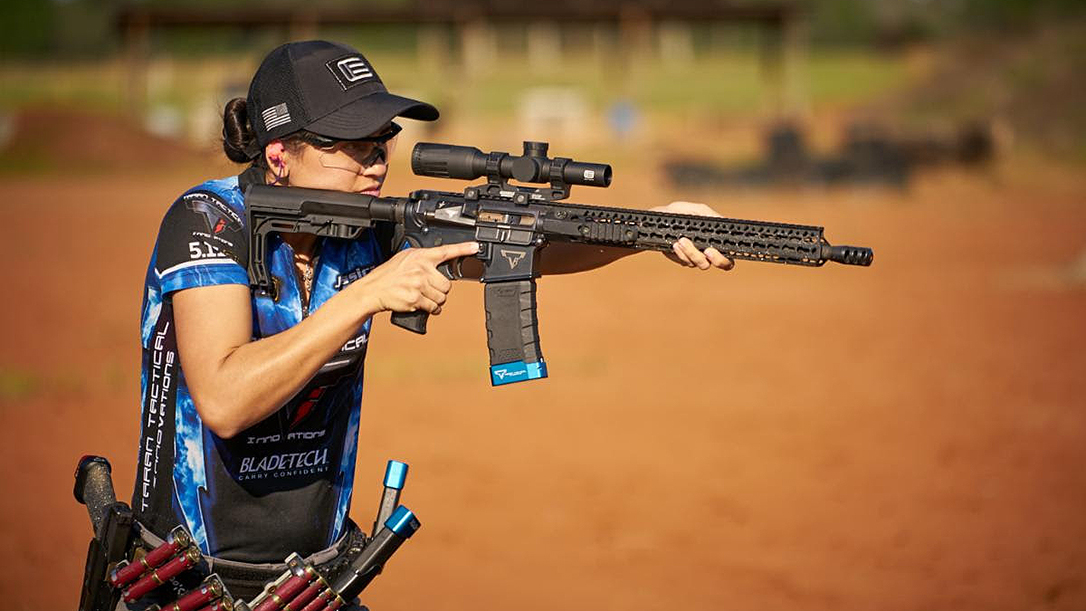 In our opinion, the best second focal plane lpvo is EOTech’s Vudu 1-8x24 SFP. While 1-8x power lpvo’s are not commonly made with second focal plane reticles EOTech designed this expressly for 3-gun competitions. That means this lpvo is great for short to mid-range hunting distances as well. Of course, if you’re hunting larger game or doing precision shooting you might want something with more range and in that case this optic would not be the best for those applications.

What are all the applications that a lpvo can be used in? In this section we’ll discuss all the instances where iron sights, red dot sights and holographic sights just might not cut it but a lpvo might be more suitable.

A lot of competitive shooting involves cardboard slaying at very close distances. But to make things more interesting, it’s very common to see a couple of steel targets be set out a couple hundred yards away for a match. While a red dot, reflex or holographic sight can be perfect for any target inside of 100 yards, it might get difficult once targets start being placed out double or triple that distance. Accuracy is important and gets you higher scores in some types of matches but at the end of the day, speed is the name of the game. An lpvo can help competitors save significant time in finding their target and taking aim which is paramount when looking to place and win medals.

Plinking is really fun. Sometimes there’s nothing better than the positive feedback of hearing the sound of steel ringing through your ear pro. But at some point, you have to ask yourself, “what the heck are you doing?” Are you shooting with any sort of purpose or are you really just mag dumping? Hopefully, you’re training for a specific reason. Whether your reason for doing target practice is for competition or more for a duty purpose, having an lpvo is a force multiplier as it increases your effective range and accuracy. If you expect to be engaging targets further out than 100 yards getting a lpvo is highly recommended.

It doesn’t seem like lpvo usage is as common with local law enforcement just yet but you can be sure that our military is definitely all aboard on the lpvo train. For most civilians and competitors we won’t really need any lpvo with power magnification ranges above 1X to 10X. However, soldiers in the military may need to regularly engage with the enemy at much further distances than that range allows for. Which is why there are also several LPVO’s that cover a much further distance. Just look at all the different ATACR riflescopes that Nightforce offers. 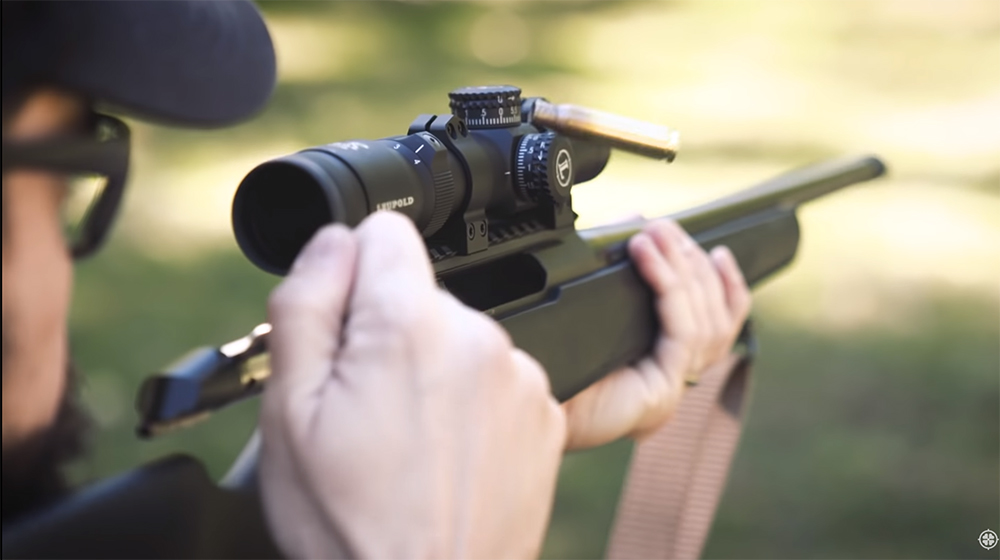 LPVOs are perfect for hunting varmint and smaller game 1X to 6X power is the perfect amount of optical range needed to hunt coyotes or feral boars. But of course, if you need more range you opt for a scope with 1X to 8X or 1X to 10X power. Anything bigger than that and we tread into medium powered variable optics and that’s not a lpvo anymore.

Start your next AR-15 build with 80 Percent Arms!

We hope this has helped better inform you on the first vs second focal plane debate. Whether you get a FFP LPVO or a SFP LPVO, you’re going to need a dope AR-15 to put it on! Start your own 80% AR15 build today and let our awesome customer service team know if you need any help along the way.

The anti-gunners in gun control advocacy groups and politicians are constantly going after our rights to have and make our own firearms. Don’t believe us? You must not have been paying attention to the news the past couple of years. Subscribe to our emails below to get our weekly newsletter so you stay informed and apprised of the most important 2A News today.