If you've ever played Tom Clancy’s Splinter Cell video game or the first mission of Call of Duty (4): Modern Warfare you've gotten a small taste of what using night vision is like. Well, how would you like to try out night vision for yourself? What if we told you that just about anyone with deep enough pockets can actually own their own night vision device? You definitely do not need to be an active member of the military or law enforcement to own your own night vision goggles. Whether it’s for shooting and training in low light situations or taking a nice midnight stroll in the hills - it's definitely possible to buy, own and get hands-on with these types of devices. 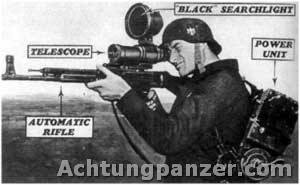 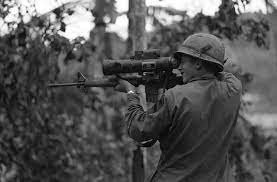 Figure Left: The Zielgerät 1229 “Vampir” - German Night Vision Rifle Scope attached to an StG 44. Attached above the scope is the “black” searchlight to produce IR light for the optic to function. (Photo Source: Achtungpanzer)

Figure Right: The PVS-2 Night Vision Rifle Scope attached to an M16A1 service rifle, being fielded by US soldiers in Vietnam. (Photo Source: The Secret of Seeing Charlie in the Dark).

The first development of night vision began around WWII when the Germans initially designed infrared devices to be outfitted for their Panther tanks. Eventually they also experimented for individual infantry use. Night vision scopes such as the German Wehrmacht’s Zielgerät 1229 “Vampir'' went into production to be tested but they were never actually deployed in the field. Part of the problem was that these night vision devices were too bulky to be used effectively as the device needed a large infrared illuminator (AKA the black searchlight) mounted with the optic to provide enough illumination for the optic to be usable without using white light.

The world of night vision can be a tricky place to explore without much knowledge so we are here to help you understand the main gist and science behind it. 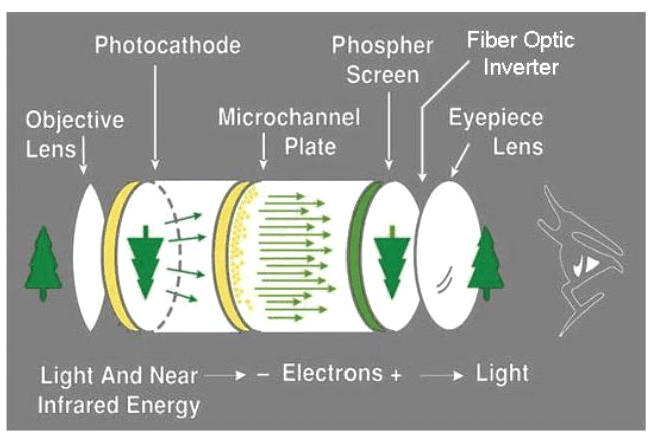 When people talk about night vision tech or products it's easiest to understand by first identifying which "generation" the products. NVG products are categorized into generations, starting with the World War II-era Generation 0 to modern-day Generation 3. The early generations of night vision depended heavily on either large amounts of infrared light or ambient light (an example would be moonlight, same idea as sunlight) but with the improvements made in  Gens 2 and 3, the image intensifier tubes allow usable imagery even in the absence of ambient lighting.

How does night vision work in total darkness? 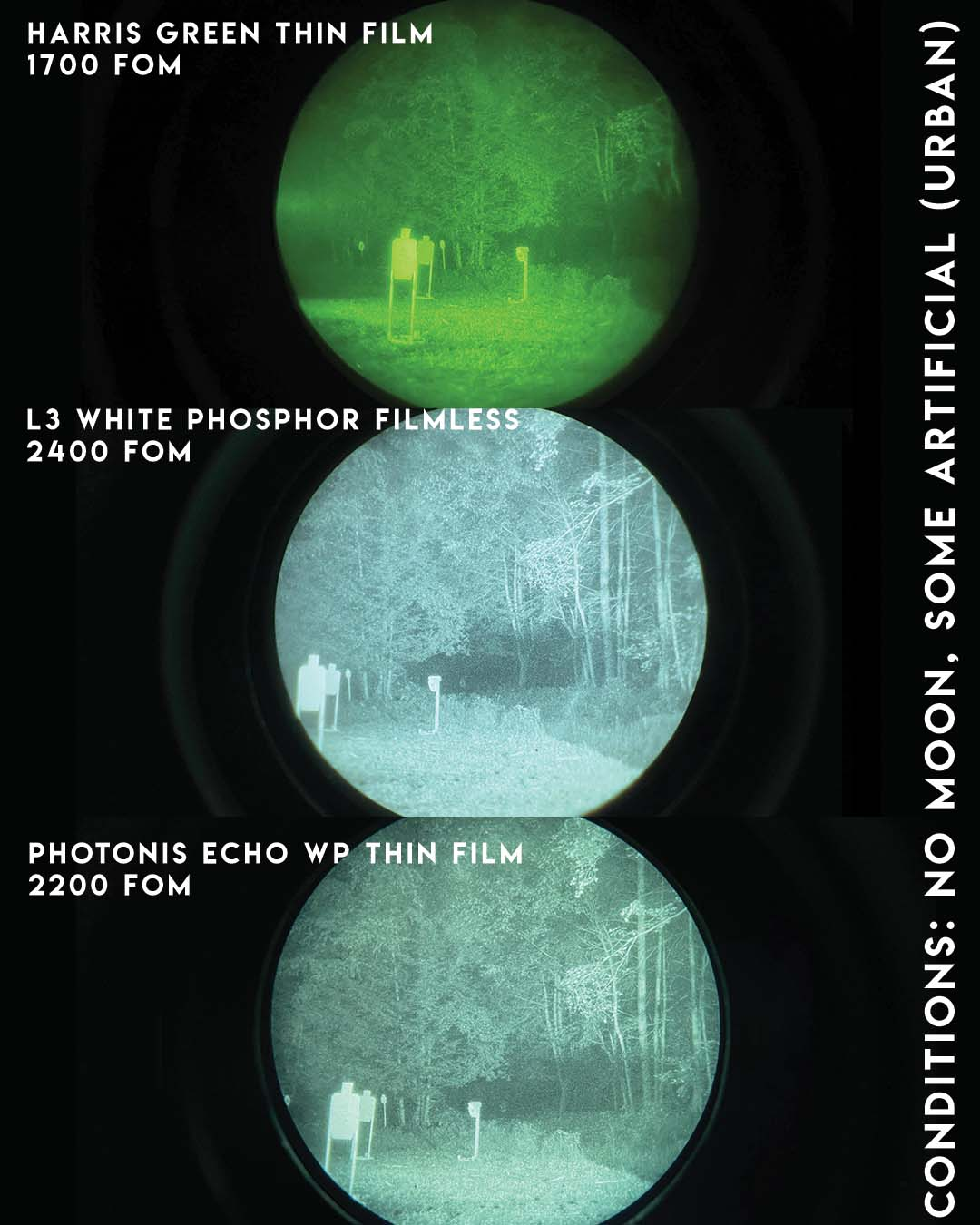 Depending on the generation type image intensifier tubes in NODS (night vision device) the user’s experience of looking in total darkness can vary. Early generations prior to gen 3 tubes would require an ample amount of ambient or infrared light to see clearly through your objective lenses. Modern gen 3 tubes for the civilian market have two categories, thin-filmed and filmless. Thin-filmed NODS are a slightly more cost-effective option for avid night vision users as there’s a thin film of aluminum oxide in the tube which helps to promote longevity. As you can see in the comparison figure above, filmless tubes perform a lot better in low light situations, providing more clarity/contrast than thin filmed, but they are more  expensive. 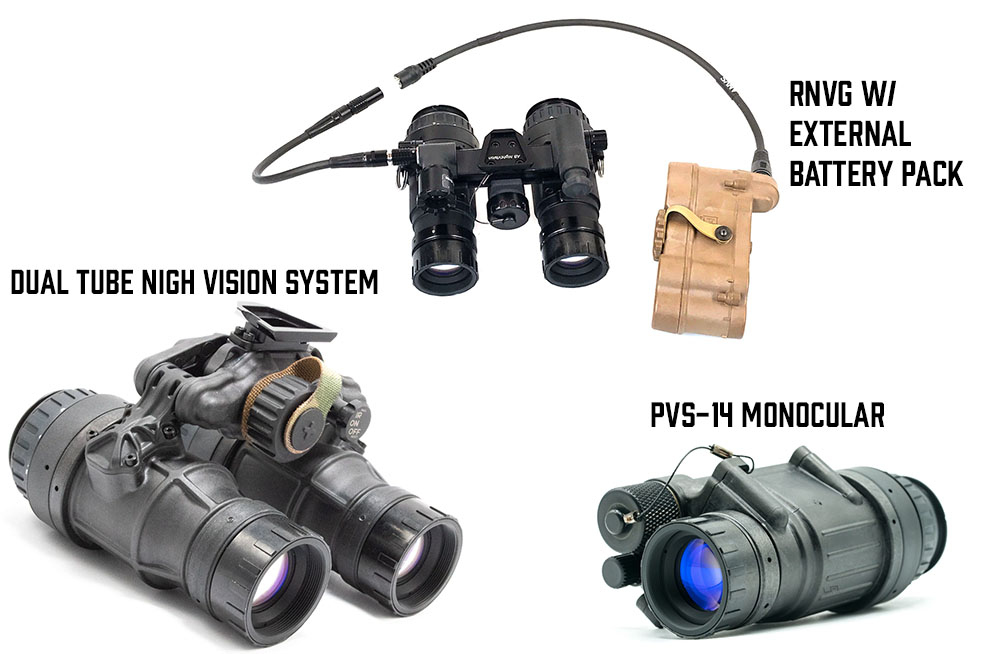 With the current night vision monoculars and binoculars on the market today, there are a wide variety of battery types that can be used as power source options for your NODS. Possibly the most common night vision monocular on the market, the PVS-14, has battery bodies that can take both AA batteries or CR123 to power the monocular. When we look into the night vision binocular realm, we can see more power options for them. Some of which include having an onboard CR123 battery body or an external wired battery box that has to be attached to the back of your helmet. Although the battery box would make your helmet a bit bulkier and heavier, it also serves as a counterweight to balance the helmet when wearing NVGs mounted to your dome.

Also, when choosing batteries choose lithium batteries instead of alkaline. Yes, they are a bit pricier but will save your device from corrosion as commonly seen with alkaline batteries. NEVER use rechargeable batteries as they contain a higher wattage that could potentially harm or irreparably damage your NODS. A suppressed M4 rifle in a DMR-like configuration with a scope and night vision optic. (Photo Source: M4Carbine.net)

When we think about night vision usually the first image is some sort of  head-mounted night vision devices right? You can also  what about if you want to mount it to a rifle? You could mount a PVS-14 behind your optic to have the capability to shoot in the dark, BUT, they are not made for rifle recoil, especially beyond 5.56 NATO/.223 Wylde. However, there are clip-on night vision scope units made for uses like precision shooting, such as the Knight’s Armament PVS-30 that sits in front of the scope. The pro to it is that you can directly see what you are aiming for with your weapon in the dark, however, the con is the additional weight and bulk the rifle will be. The one possible solution if you are considering a weapon-mounted optic for night use would be getting a thermal optic as it is deemed useful in the military and in recreational hunting. That’s a way different topic for another day.

PROS and CONS of using NODS

Every product has its own set of pros and cons, that goes for night vision too.

Force multiplier - The ability to move and shoot with a low light signature. With newer generations of night vision devices out in the market, it allows users to be positively identify friend from foe. NODS are an expensive piece of equipment which usually give you the strategic and tactical high ground against combatants in the dark who aren't using night vision.

Versatility - Military and law enforcement purposes aside, pilots and search and rescue operators can also utilize NODS. There are also recreational activities like hiking, hunting, or even stargazing. Of course, there's also the obvious fun factor of simply seeing things in the dark.

Portability -  With so many different sizes of various NODS... the ability to take them out and use them for whatever mission or purpose as needed is very convenient. As an example, the PVS-14 is the smallest night vision unit available on the market and it's small enough to stow away in a general-purpose pouch. Even if you don’t have the mounting hardware for the PVS-14 to attach to a helmet, it can be used as a handheld observation monocular too!

Cool Factor - Increase larperator style points by 100. (Just because you have fancy gear doesn't mean anything. Be sure to train with it to actually be worth your salt).

Learning curve - It will take time to train and learn how to see and move with night vision, as these devices do not give us the same natural near-180 degree field of view (FOV) as portrayed in video games or movies.

Cost - NODS can be so expensive! For newer gen 3 devices, you get much more clarity with less noise but for this level of quality be prepared to spend anywhere between $15k - $20k or more! Anyone who plans to be shooting under night vision has to figure out how to aim. Whether you're running NODS on a helmet mount or mounted with a rifle optic, your eyes have about 5 inches of hardware in front of you so aiming normally as you would during the daytime and without the challenge of using NODS would be impossible. It isn't too much of a stretch to say that having night vision is like buying a super power. But in order to use it effectively you have to put some though into purchasing your active and passive aiming setup. Don't worry, we'll go through each of the aiming methods as well.

Active aiming is an aiming method when the shooter uses a laser device to aim and engage at the target. Aiming with lasers is handy when trying to look through optics while wearing night vision is a hassle and not rapid enough to get well-aimed shots in a close-quarters environment. Laser devices such as Steiner's DBAL lasers (i2, A3, and D2), L3 PEQ15 or its civilian counterpart, the ATPIAL-C, Holosun laser series, and the BE Meyers MAWL C1+ are good civilian options to look into. The laser within the unit is a common combination, but some units have an onboard-IR illuminator which is another factor to consider as it's important to be able to not only positively ID your target but light up areas when necessary so that you can actually see where you're going with the NODS on. 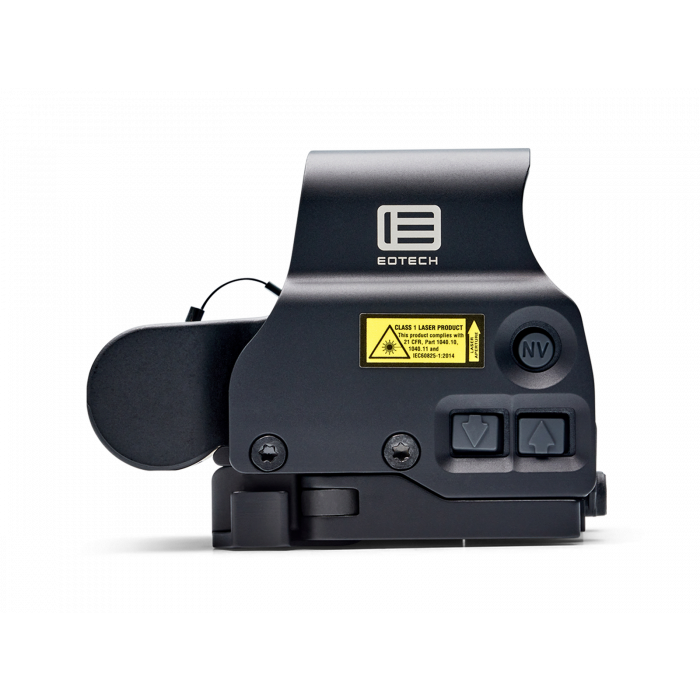 In contrast to active aiming, passive aiming involves the use of a night vision-compatible optic to engage their target without emitting any lasers or IR light which would reveal your position to potential foes. Military and law enforcement personnel will have to consider this as night vision becomes more common place, others may be able to use night vision against you as well. That's why these optics, such as the EOTECH holographic sight in the image above are so useful, as they have a separate function for night vision mode. When this setting is turned on the optic's reticle will be visible even under night vision without the risk of damaging your night vision tubes when aiming down sight.

Night vision is a great (expensive) hobby to explore and we are especially lucky in the United States to have this technology available for the civilian market. Due to the laws of the International Traffic in Arms Regulation, commonly abbreviated as ITAR, US-made night vision items are regulated and cannot be shipped or taken out of the country without an export license and permission from the US Department of State.

While it may be difficult to get NODS that check off every box in terms of price point and features, it's a sliding scale that only you can decide on what's most important to you. Do you want to have manual gain control? Do you prefer an onboard or a mounted illuminator? How heavy of a battery are you willing to carry and are you able to pay the price for it? These are some questions you'll ultimately have to find the answers for yourself before purchasing NODS.

If you're planning on training in the dark with night vision, you need to get a rifle and pistol set up in conjunction with a variety of aiming solutions. What better way to get that set up started together by building your own AR15 or MOD1 with parts accessories from 80% Arms!