This is an ultimate AR9 guide that you can use in 2021 and beyond. We have tried our best to break down everything you need to know before you build one yourself at home. Before delving deeper into the details, we will help you understand what an AR9 pistol is and the main features that it comes with.

Once you are done going through this guide, you will get to know the difference between AR9 and AR-15. You’ll also know more about the 9mm parabellum's ballistic, parts compatibility, buffer weight, twist rate, barrel length, and magazines. Ideally, we will share a lot of details with you so that you don't get stuck when trying to build a suppressor-friendly AR9.

What Is an AR9 Pistol?

Sometimes, the AR9 pistol is spelled as AR-9. This weapon is the latest variation of AR-15. Before getting into details, the 9mm AR pistol kit is what most shooters acquire to build from scratch. For the best experience, it has to be paired with a 9mm AR lower.

Keep in mind that the AR9 pistol is more than its AR-15 counterpart. The 9mm parabellum conversion kit makes the gun perform like an aggressive beast. The converted 5.56/.223 pistols leverage unique parts to adapt both lower and upper receivers to function best with the 9mm cartridge.

The AR9 pistol, on the other hand, is unique because it comes with a 9mm barrel, an AR-15 buffer system, a new bolt carrier group, and a lower parts kit. The buffer tube should have the 9mm-specific buffer, but this is something we will discuss more later. 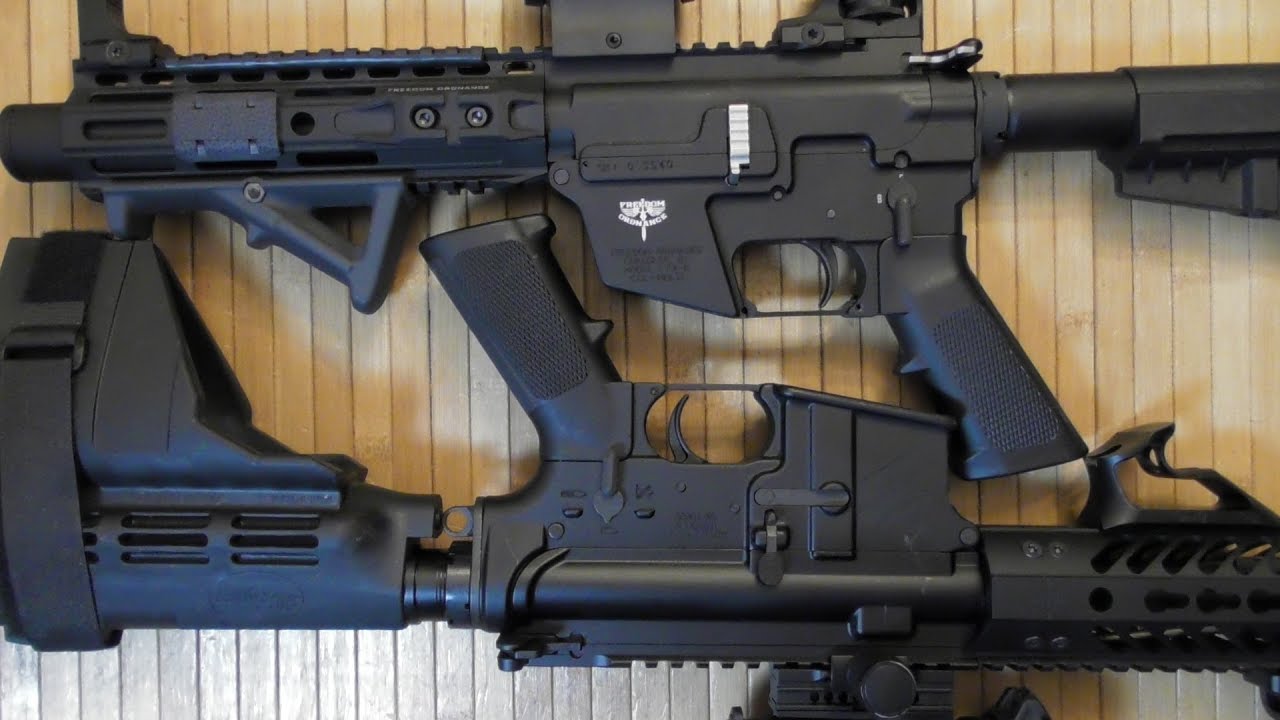 What’s the Difference Between AR9 and AR-15?

If you just focus on the appearance, you will notice that the two pistols have a striking resemblance, but upon further inspection, they use completely different systems. Therefore, the two guns work differently. Here are a few ways that the two weapons differ:

1. The 9mm Needs Blowback to Operate

If you have the AR9, try to take a closer look at its upper, and you will notice that the gas tube is missing. The reason for this is that the AR9 makes use of blowback to cycle the bolt. Here’s how it works:

For a deeper dive into the main differences between AR9 and AR-15 and the pros and cons of each, read our full guide here!

The short answer is because it doesn't produce the necessary gas pressures to re-direct enough gas to actuate a bolt that way. The long answer explains why a little better.

With the 9mm being a pistol round, it's optimized to perform out of short barrels, typically around three to five inches in length. Pistols typically do this by using faster burning powders than rifles, so they have a very quick spike in gas pressure, which rapidly dissipates over longer length barrels. A direct-impingement system like the AR-15 works by re-routing some of that gas further down the barrel, once the bullet passes a gas-port. However, the reason that you typically only see 9mm SMGs or 9mm PCCs in a direct-blowback type system, is because the pressures aren't high enough to actually actuate that kind of system, or a piston system. This leaves us with a weapon that recoils a bit harder than other modern systems, without a real work-around. Nowadays many 9mm PCCs will use a radial or roller delayed type system, but the AR-9 sticks to direct blowback.

How to Craft a Good AR9 Pistol

Now you understand that while the AR9 and AR-15 look similar, they have significant differences. You can start selecting the parts to build.

Note that the barrel is the most important part of your gun. The barrel does more than just make your pistol as accurate as possible. The length of the barrel will determine whether the fired rounds go supersonic or subsonic, so you must always choose carefully. Ask yourself if you are looking for a close-range, subsonic rifle that can be easily suppressed and get dead quiet or if you need an AR9 that is medium range and that can hit targets that are up to 100 meters away?

It is still also possible to end up with a barrel length that lets you aim for something in between and that lets you play with velocity and hand loads. Knowing more about the details will help you decide which size will best suit your needs. 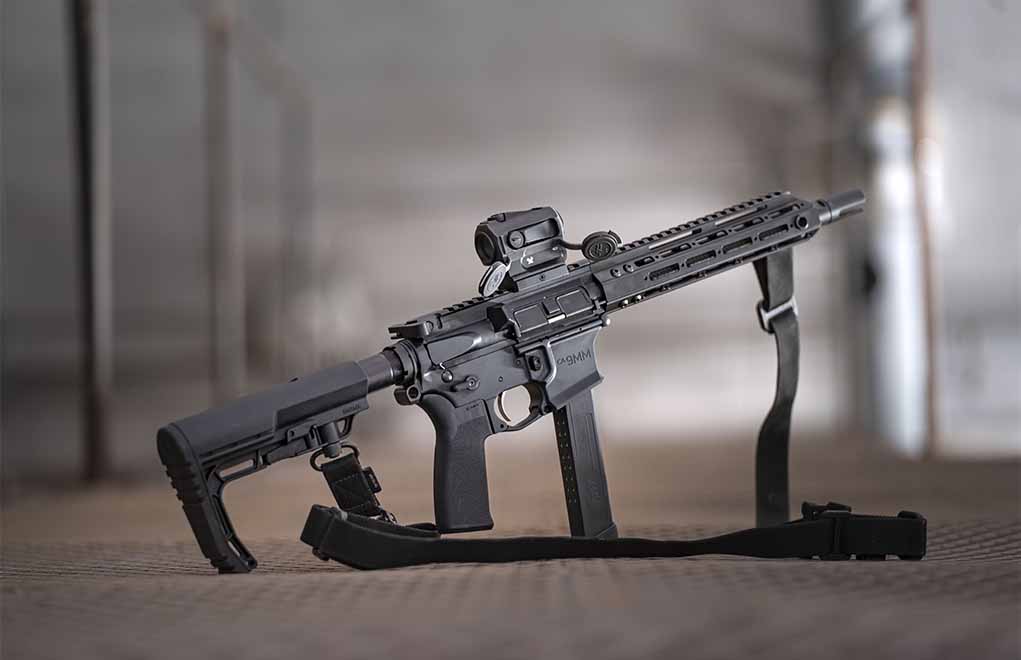 What Is the Best Barrel Length?

In order to know the best barrel length that will help you to utilize the ballistics of the 9mm cartridge, you also need to learn some science. To make your bullets go supersonic, then the best number to use is 1,125 feet per second. If your bullet goes faster than that, it will also produce a crack and eco downrange.

However, if the round travels at a speed less than 1,125 feet per second, it will not break the sound barrier, which means it will remain subsonic. The only sound you will hear will be the one made when the gasses leave the muzzle.

The barrel of your gun is considered maximum when adding more length only yields a negligible increase in velocity. Therefore, when choosing the ideal barrel length, you should have in mind your tastes and preferences. In addition, you should keep in mind that it doesn't make sense to increase the barrel length when you will only be adding less speed.

What Is the Best Twist Rate?

Thankfully, picking the ideal twist rate for your AR9 is one of the easiest things to do. Lots of handguns and machine guns that come with 9mm have already proven the fact that 1:10 twist rate is the best.

When the AR9 platform was introduced, 1:10 is the twist rate that the manufacturers settled on. Many shooters have tested twist rates that range from 1:10 to 1:20, and the consensus seems to be that there is a negligible difference within the range in terms of accuracy and placement.

Other than other rifle rounds that happen to be fast and long and that require additional help to achieve stability, the 9mm is relatively shorter, stubbier, and slower. It also gets most of its power burned immediately. These results imply that the pistol attains the optimal velocity much faster and stabilizes more easily without a lot of rifling.

What Is the Right Buffer Setup?

The buffer systems are only meant for the AR9, but you might have to spend more than a standard AR-15 buffer kit to get them. According to most shooters, a heavy rifle/H3 buffer or a pistol buffer used alongside a standard AR-15 recoil spring, as well as a buffer tube, can provide your AR9 cycling and can operate quite effectively.

The type of magazine you choose for your AR9 will also determine the lower receiver and bolt you go for. Most parts of the rifle will state “Colt-style” and/or “Glock-style.” Most builders say that some compatibility problems are created when trying to mix and match Colt and Glock AR9 parts, so you should keep that in mind as you’re crafting your AR9.

The rule is that you are supposed to choose a lower and bolts that are perfectly compatible with your 9mm magazine. If you intend to use Glock magazines, it is advisable to choose a Glock-compatible AR9 lower and an upper with a G-9 hybrid bolt. You will learn that most builders prefer the G-9 Glock/hybrid route. If you have already made up your mind to use the Colt 9mm magazines, then it is necessary to stick with the Colt-style AR9 bolt and the Colt-style lower.

What Is the Ideal Lower Parts Kit?

To make your AR9, use the standard AR-15 parts kit and hammer, and you should ensure that the 9mm bolt is ramped. This is the slopped part that is right underneath and that is in the center next to the head of your firing pin. Unless the bolt is ramped, you must use a modified hammer to get rid of the clearance issues between the lower and upper. Thankfully, most 9mm bolts come ramped, so you won’t have to worry about that. 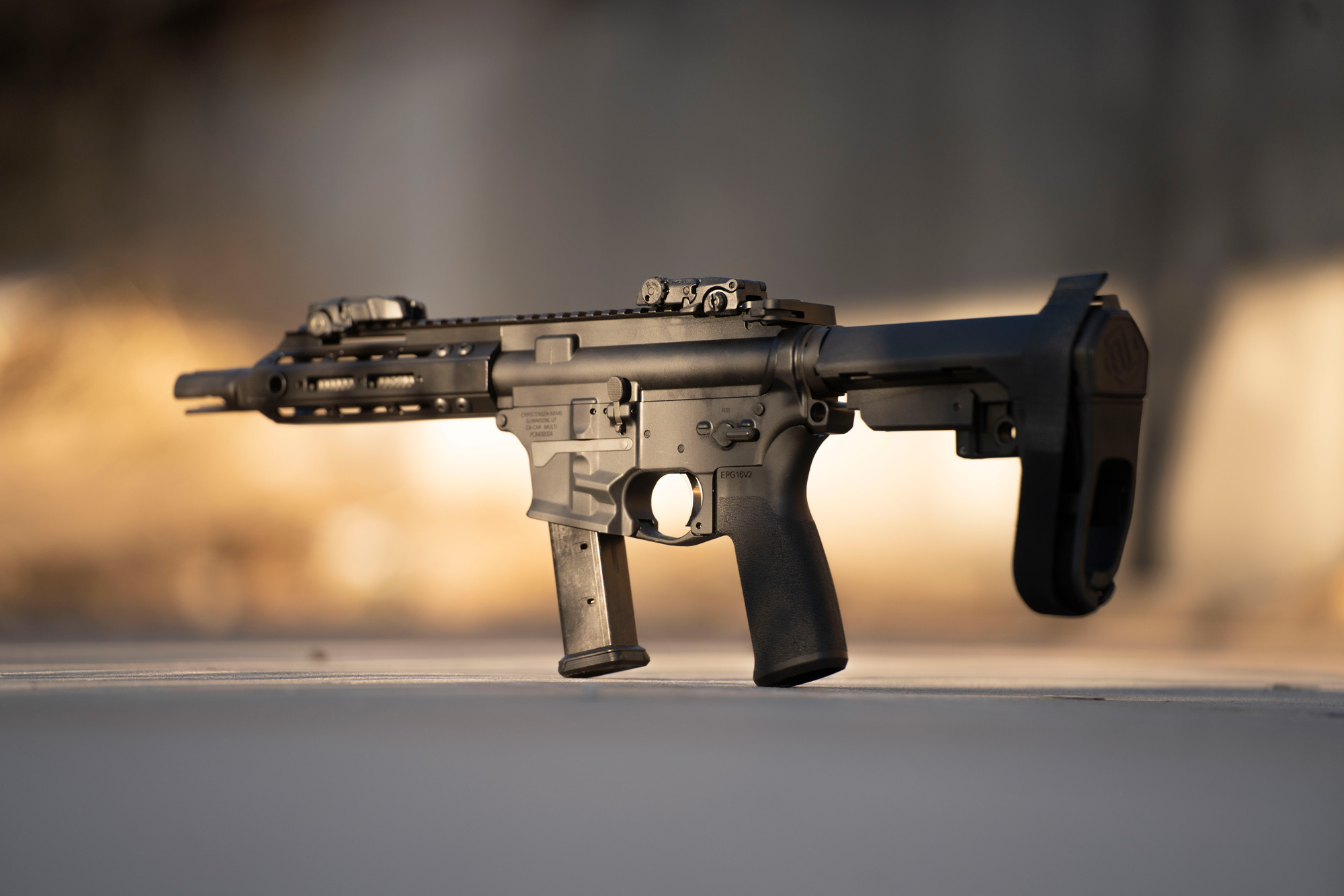 What About the Right Upper Receiver?

This is one of the easy picks since your AR9 leverages the regular pistol’s stripped upper. While you are free to go with any AR-15 upper to save more money, you can neglect the forward assist feature. This is because the pistols come with bolts that don’t use the forward assist, which is why they are not necessary.

This is a good question. It seems like you can easily convert AR-15 to AR9 by simply buying a conversion block and the 9mm barrel and placing all the pieces in a magazine. But in reality, this conversion isn’t possible because the AR-15 that you will be converting is designed for .223 Rem or 5.56 NATO, which means a 9mm bolt carrier group is needed. To create a 9mm bolt carrier group, you would take a lot of extra steps, so you should just go for the AR9 right away.

The main takeaway here is that the AR-15 and AR9 have many similarities, so you should know what you will need for your project. The AR9 uses the same upper receiver, buffer system, lower parts kit, and accessories.

However, the two rifles have significant differences that you must take note of before you begin. For instance, you will need a different lower receiver for the AR9, but you can either use Colt or Glock magazine. As we have already explained, you cannot convert an AR-15 lower to 9mm. Even if you manage to do it, you will have wasted many resources and time, and you still might not attain perfect functionality. Keep these suggestions in mind as you go about building your AR9 at home.