Did your AR-15 come with a tough trigger? It’s understandable as to why people want to quickly swap out the trigger in their AR15 rifle for a new one when it’s brand new. The trigger hasn’t been broken in yet, might have too much or too little lube and with ammo prices being what they are… it’s actually cheaper to get a drop-in that feels great from the get-go.

As you shop for a new AR-15 trigger, these are the key terms you’ll need to understand to get the full benefit of doing your product research when looking at reviews or installation instructions:

The ‘take-up’ refers to trigger slack. This means the sear doesn’t begin releasing the hammer immediately as you pull on the trigger. The take-up ends once the trigger meets the ‘wall.’

‘Creep,’ is related to when people are mentioning ‘take-up’ but specifically refers to the extent of trigger movement between the time the sear begins to swing out of place and when the hammer is fully released. Consistent creep is OK as long as there aren’t any inconsistencies in the trigger creep such as an increase in trigger tension at different points along the creep — which can also contribute to inconsistent weight of trigger pulls.

The ‘wall’ is the point at which pulling on the trigger begins to move the sear and release the hammer. You’ll know you’ve hit the wall when you feel tension in the trigger and resistance to the squeeze you’re putting on it.

Once you squeeze further past the ‘wall,’ that’s when the trigger ‘breaks’ and is the point where the sear completely releases the hammer which then slams into the firing pin.

‘Stacking’ refers to an inconsistent trigger creep. If this happen, you’ll have to exert more pressure on the trigger to get it moving again, resulting in an inconsistent and jerky trigger pull. Generally speaking, if you’re dealing with an AR-15 drop-in trigger, you should not experience this or have to troubleshoot it at all.

‘Pre-travel’ is the measurement of the distance of the take-up, wall, and creep combined.

‘Over-travel’ is the measurement of the distance the trigger continues to move even after it breaks. 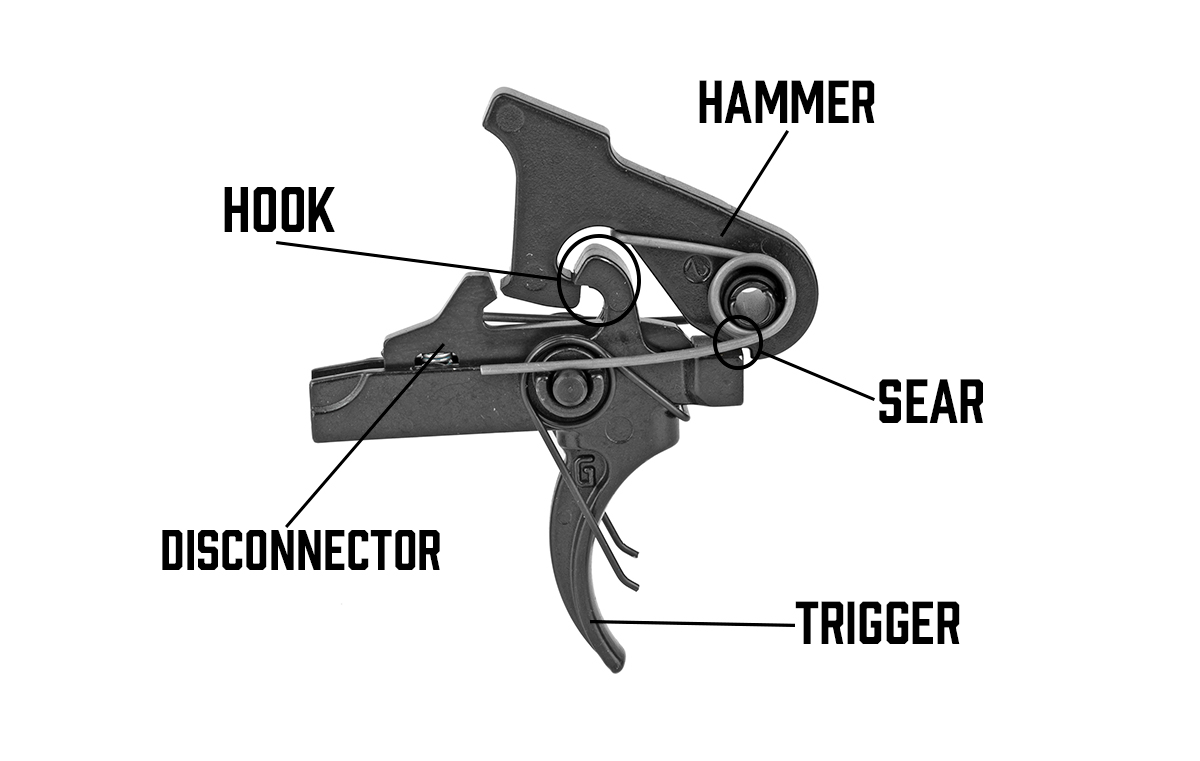 There are five main components to any standard AR-15 trigger which include the trigger, hammer, sear, disconnector and the hook. Know these components to make your AR-15 installation process that much smoother:

Trigger - The trigger is the main part of the mechanism. It’s the small lever you squeeze to initiate the firing action.

Hammer - The hammer is a flat-faced piece of metal at the top of the whole assembly. It rotates up and down, and when the trigger is pulled it strikes the firing pin, igniting the primer and the chambered round.

Disconnector - The disconnector is a component that keeps the hammer cocked. Once a round is fired, the hammer flies back into place with such force that without the disconnector catching and holding it in place, the hammer would bounce away and de-cock before the trigger could be held back in place.

Installing a new AR-15 trigger is super easy as long as you have the right tools beforehand. Consider getting a vise and a lower receiver vise block to make it easier to hold the lower in place. However, you’ll definitely need a ⅛” punch or a #4 roll pin punch along with a nylon/brass hammer. A standard gunsmithing tool kit would include most of those tools and set you up for less headache when working on your AR15 or other builds in the future.

Now for the step-by-step installation process:

A common issue that the AR-15 trigger may suffer from is the failure to reset. If the trigger isn’t functioning, you can perform a simple check to see if this is the problem: 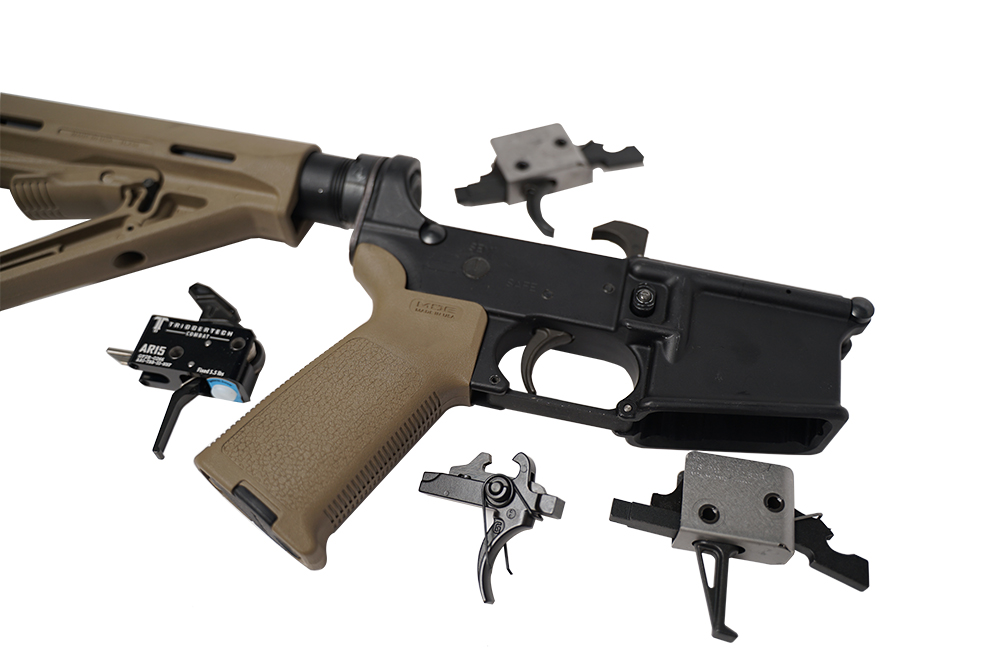 Single-stage trigger is the standard trigger for most service rifles and store-bought AR-15s. The simplest AR-15 trigger, it’s reliable, doesn’t often have much creep or take-up, and stacking is rarely a problem.

Two-stage triggers are designed to create a trigger wall during trigger squeeze. In order to circumvent the need for a heavier trigger pull, it has slack intentionally built in. Once the trigger wall is reached, a predictable and slightly heavier pull is needed to release the hammer.

Binary triggers essentially fire two shots for every squeeze of the trigger. The hammer is released not only after the initial trigger squeeze but also once the trigger is released back into place. This type of trigger isn’t legal in all states, so check local regulations before buying one.

Drop-in triggers are the easiest to install since it’s a self-contained unit with all the necessary trigger components combined. A good quality drop-in trigger should have already been adjusted at the factory to ensure that slack, creep, and stacking isn’t a problem.

We recommend using quality parts in your trigger group for the best results, and with out AR-15 mil-spec lower parts kit, you’ll have everything you need to assemble your trigger group in one affordable bundle. However, if you prefer something with a little more panache, check out the...