What is M193 Ammunition?

The bullet itself is 55gr, coated with a full metal jacket and lead alloy core. It’s a centerfire cartridge that belongs in the 5.56mm family. Keep in mind, however, that this ammunition is not always compatible with .223 Remington rifles. There is a much larger power load that this round fires with meaning your civilian rifle may not be able to handle the resulting pressure.

This type of ammunition has no identifying marks on its body making it easy to discern from M196, M199 and other 5.56 cartridges. The M193 round is the standard round used with M16A1s in the field, so essentially, this is the ammo the US Army deployed back in the day.

The ball itself is 0.76 inches in length. Compared to other types of 5.56 ammunition, M193 rounds are considerably shorter and lighter.

What are the Internal Ballistics of M193 Ammunition? 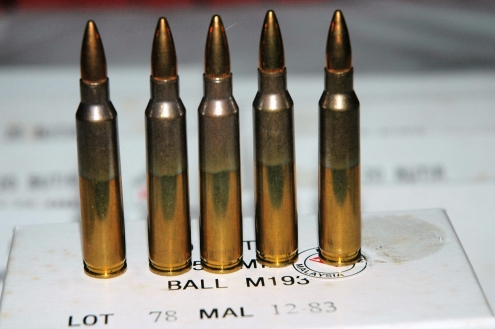 Luckily, because of M193 ammo’s relative lightness, older rifles are able to put enough spin on these rounds in the barrel to make them fire off consistently. The M16A1, for example, has a barrel twist of 1:12 meaning for every 12 inches the bullet travels through in a barrel it will rotate one time.

The longer the barrel of your rifle, the more velocity your round will gain as it exits your rifle. This is due to the fact that longer barrels allow for more rifling to convert forward kinetic energy into angular momentum. This process is what allows quarterbacks to throw deep bombs in NFL games. By spinning the ball on its way out of the quarterback’s hand the ball becomes stabilized in the air allowing for a faster, more accurate delivery.

A longer barrel also allows for more time in which chamber pressure can act on the round being fired. While a barrel with a smaller barrel twist of 1:7 or 1:9 may be needed to reliable discharge other 5.56 ammo (M855) the M193 doesn’t really care. The round is light enough that the initial velocity and stabilization will get the job done within a reasonable range. M193 will fly straight and true up to 300 yards.

What are the External Ballistics of M193 Ammunition? 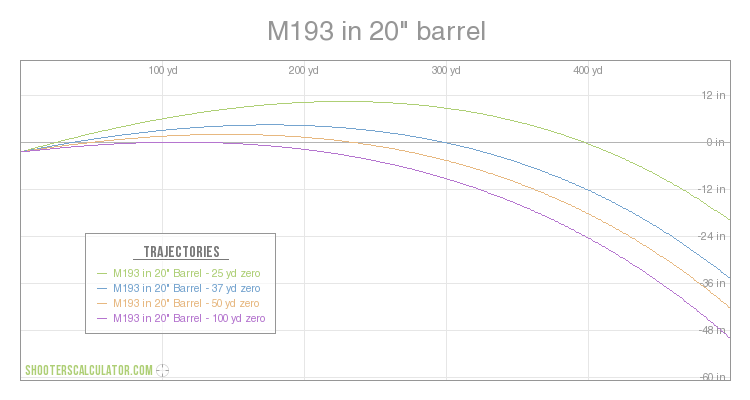 When considering the aerodynamics of M193 ammunition compared to other 5.56 there’s really not much of a difference. They’re all elongated compositions of brass, copper and lead with very similar designs.

M193 trajectory is determined by the weight of the bullet, air resistance and gravity. On a good day, an M193 bullet would find itself flying straight until about 200 to 225 yards. At that range, you’d need to account for bullet drop to hit your target.

Of course, longer barrels add more velocity via angular momentum, so keep that in mind next time you take M193 to the range.

We know that the bullet itself weighs in at 3.63 g. Less weight equals more acceleration which equals more velocity. The relatively fast velocity of M193 ammunition at 3,250 fps makes it arrive at its target marginally quicker than its 5.56 counterparts.

What are the Terminal Ballistics of M193 Ammunition?

A small but effective chart demonstrating M193 fragmentation at range

The full metal jacket design of ammunition is sometimes thought to have been designed to put the American military within accordance of the Hague Convention of 1899. The convention called for the banning of ammunition that easily flattened or expanded in the body.

Because of its simplistic design, it’s been reported that M193 ammunition didn’t perform well enough in terms of damage after penetration. However, these claims were largely false, and stem from issues with the original 1:14" twist-rate of the first M-16s in Vietnam, not stabilizing the bullet correctly. M193 is a proven combat round, and still in use around the world. The M855 "Green Tip" is notorious for punching clean holes without fragmenting, and this is often confused for M193.

However, this is not a barrier-blind round. For shooting through body armor, car doors, walls, windows, and other intermediaries, there are better ammunition choices out there. Because of the high velocity lightweight 55gr round, it is very susceptible to deflection.

If you're looking to build a rifle, and really get the experience of creating one yourself (along with the other benefits to 80% lowers), check out one of our AR-15 build kits.