“PDW” stands for personal defense weapon. You may know the term from Call of Duty video games but this class of firearms generally refers to compact weapons that can be stored under a jacket — typically employed for personal detail type roles. Many military engineers, transport drivers and pilots are also known to have been issued various forms of PDW’s to protect themselves should they ever be involved in an event where their vehicle has been disabled and they must abandon it. Civilians might also refer to PDW’s as their “truck gun.”

What makes a PDW?

The requirements for what makes a PDW has changed over the years as it now requires PDW-type guns to be able to fire sub-intermediate rifle cartridges instead of handgun ammunition. I.e. Although the Uzi was used by the Secret Service in the 80s it’s no longer considered a PDW. Instead, the FN P90 would be a good example of what makes a PDW — a small, compact firearm with selective fire capability, is magazine-fed and shoots high velocity centerfire rounds with low recoil and very fast rate of fire. The P90 is chambered in 5.7x28mm which is a less common caliber, thus making it even more expensive to buy post-COVID-19.

What’s the difference between an SMG and a PDW? 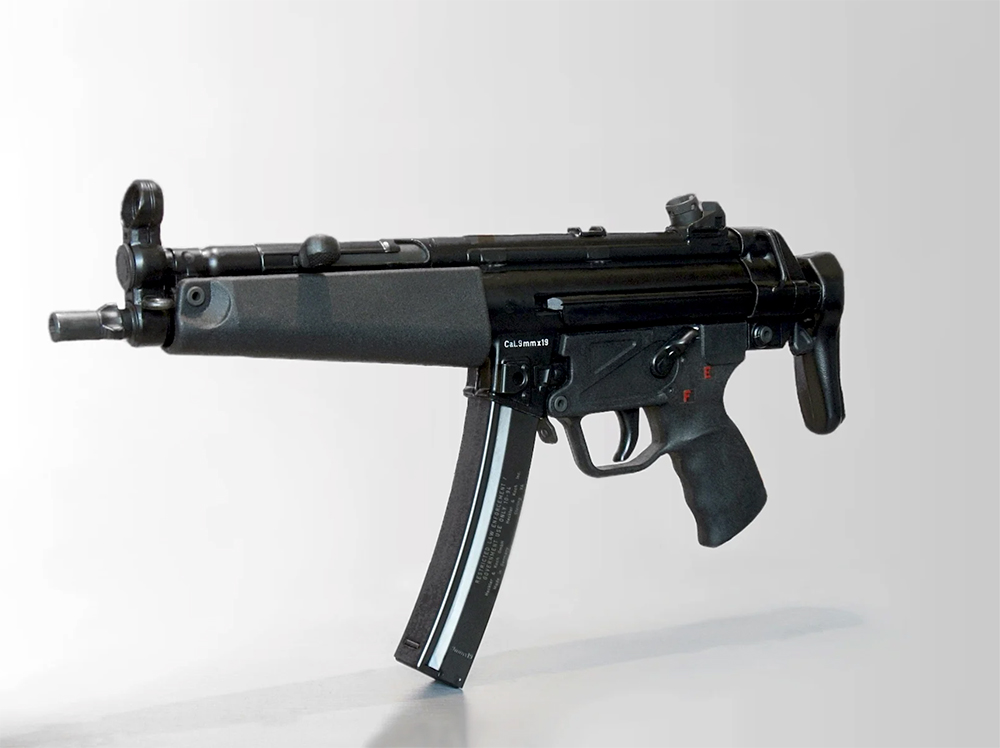 Submachine guns (SMG) are quite similar to personal defense weapons. This is where it may get a little convoluted but stick with us. An SMG can act as a PDW but a PDW cannot be an SMG due to the aforementioned requirements — Most submachine guns are chambered in pistol calibers, namely the 9mm Parabellum or .45ACP.

Though PDW is a class of firearms, it’s not a legal term in the same way that short barrel rifles are (SBR). For example, a Glock 17 is considered a full size pistol, the Glock 19 is considered a compact sized pistol and the G26 or G43 are both considered as subcompact pistols. But gun control doesn’t have any legislation that discriminates or restricts laws in the same way that PDW’s or rifles in general are regulated. Any PDW with a barrel shorter than 16” would likely be legally classified as an SBR. That’s why you might see some P90’s with faux suppressors with a longer barrel hiding inside of it to be sold as a "compliant" version. The only exception would be for short AR carbines that have pistol stabilizing grips which, for now, are legally categorized as AR pistols instead of SBR’s.

Is a PDW an Assault Weapon?

Depending on which state you reside in, your PDW may very well be considered an assault weapon. In fact, some manufacturers of pistol stabilizer conversion kits will even tell you that before installing your handgun into its PDW configuration you’d have to register your pistol with the ATF under a Form 1 as a short barrel rifle… Make sure to check your local and state laws to see how gun control is being enforced in your area. This California Rifle Identification Flowchartthat pretty clearly shows what it’s like to be us here behind enemy lines.

Shooting a handgun is hard, much harder than shooting a rifle. Assuming you’re using an optic and it’s been zeroed, you place dot on target, squeeze trigger, bullet hits target. Whereas with handguns you could be point blank and still miss a target in front of you if you’re not holding the gun properly or if the trigger is pulled too hard one way or the other.

But wait, there’s a fantastic solution for that. Attach your Glock or GST-9 to a conversion kit and you essentially have a PDW. Here are some of our favorite options currently on the market: 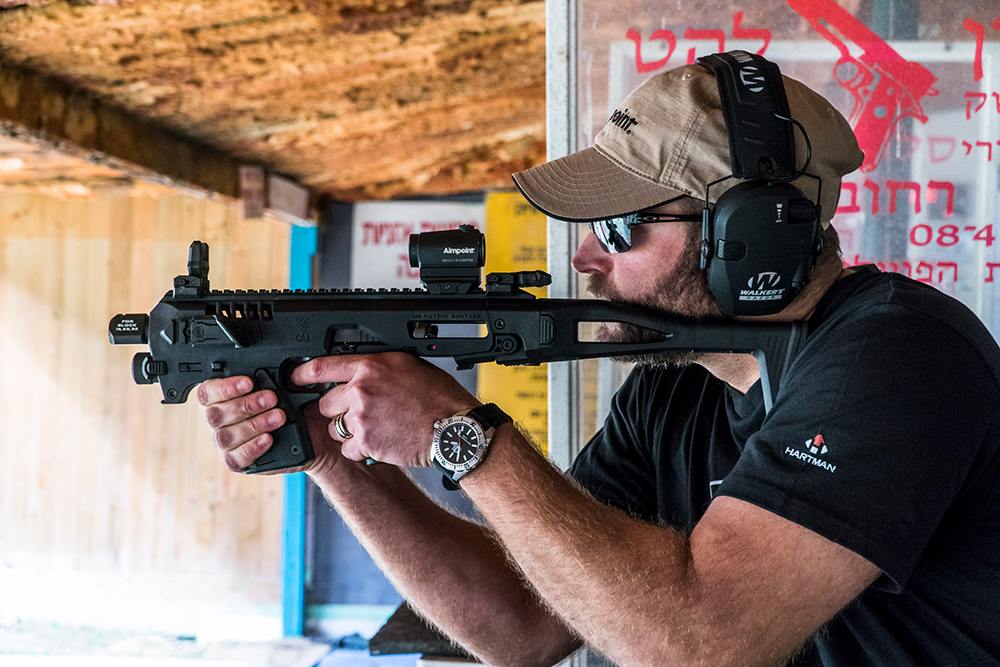 More popularly known as the Micro RONI, the MCK stands for Micro Conversion Kit made by CAA USA and is their second iteration of this product hence the “Gen 2.” The MCK has versions supporting not only Glock handguns but also pistols from CZ, Sig Sauer, Smith & Wesson, P80, Taurus and of course 80 Percent Arms. You may have seen certain versions used in a variety of movies or TV shows such as Fast and Furious 7, The Old Guard, Black Widow to name a few...

As far as pistol conversion kits go, the RONIs (first generation) and MCK’s are the most robust of the bunch. It kind of looks like a mini shark with its ergonomics, monolithic picatinny rail on top for optics or other attachments. Because of the beefy design, long stick mags and even drum mags feel comfortable to use in Glocks combined with this platform. The MCK has a variety of buttstock and stabilizer brace options as well as foldable stock attachment making this conversion kit extremely conceable and convenient to fit into small bags or backpacks. (Price goes from $249.00 to $453.95) 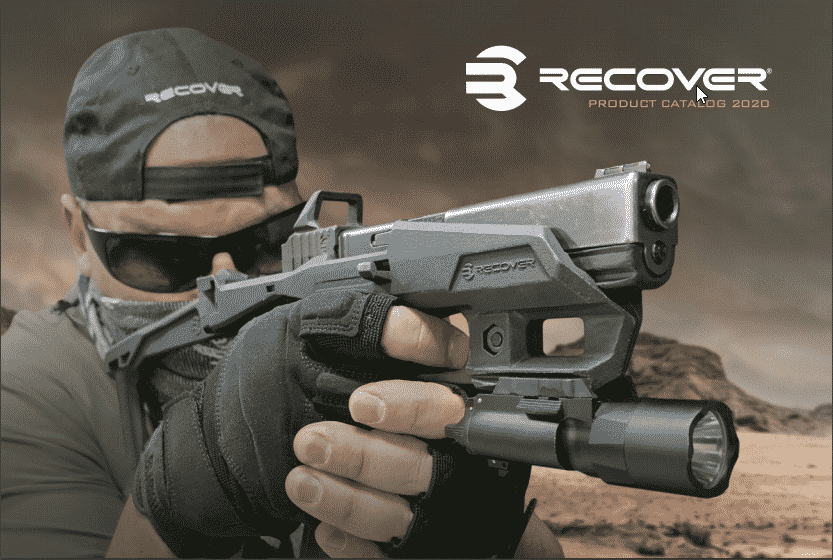 One of the newer kids and kits on the block, Recover Tactical’s stabilizer kit (RTSK) is a very low profile solution to the handgun-PDW conversion kit demand. Imagine it as something like a minimalist version of the MCK/RONI. At its base, it connects to your handgun via the accessory rail and simply provides a stabilizing brace for you to use or shoulder. However, Recover Tactical has several accessories that, if you like, could match just about everything the MCK/RONI have to offer such as a charging handle, top accessory rail, ergonomic grip for support hand that doubles as a backup mag carrier, and more.

We haven’t tried this on a GST-9 frame yet but we certainly plan on it in the near future. Just as the MCK Gen 2 fit our frame perfectly, we think it’s safe to assume that Recover Tactical’s stabilizer kit for Glocks would also be compatible with the GST-9. So far the RTSK is only compatible with Glocks and M&P Full Size pistols. Bonus fact: The RTSK is almost half the price of a MCK. (Price goes up to $189.95) Chew on that. 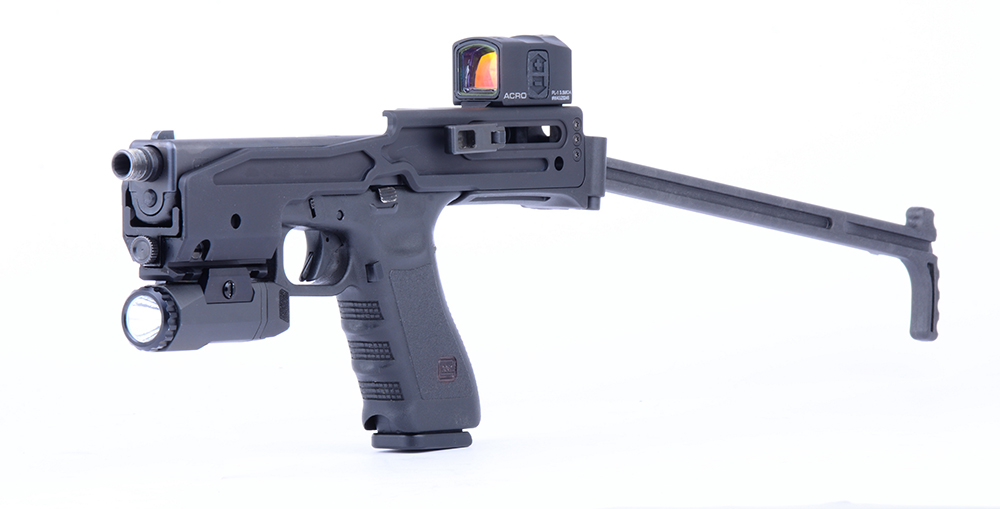 B&T AG (formerly Brügger & Thomet AG; sometimes referred to as B+T) is a Swiss defense supplier that specializes in designing and manufacturing firearms and tactical accessories such as the B&T APC, sound suppressors and rail systems.

The B&T Universal Service Weapon Chassis converts Glock pistols into PDW’s by extending accuracy and range by an even more minimalist platform that only uses a folding stock and accessory rail for a flashlight or laser in the front and a short picatinny rail on top for a red dot sight. It’s certainly more difficult to get this conversion kit online or to find a sale on it as it’s also a very popular PDW option for Glock handgun owners. (Price goes up to $399.00)

Why Buy a PDW? 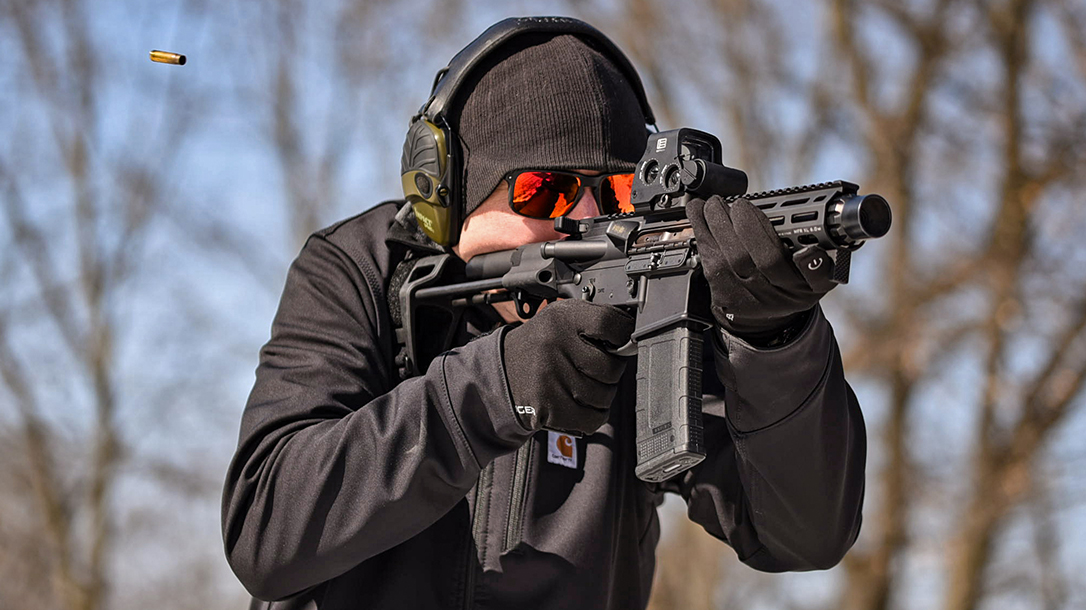 Honestly, it’s a fair question. With the advent and rising popularity of AR carbines that are far more modular and customizable — why should you spend the money on a conversion kit for a handgun when you could build a short AR pistol chambered in far more effective rounds like the 5.56mm NATO or .300 Blackout?

Well, conversion kits for pistols are a great, quick solution that will always be cheaper than buying or building a completely new AR pistol from the ground up. They also might be a lighter solution for those who don’t feel comfortable maneuvering an AR style rifle which is always going to be significantly heavier.

Some of the most popular options for AR-style PDW’s include the Daniel Defense DDM4 PDW, Sig MCX Rattler, and the Q Honey Badger which all come chambered in either 5.56mm or .300 AAC.