What is a Free Float Handguard?

So why should you choose a free-float handguard over a drop-in handguard? There are plenty of reasons why a discerning shooter would go with a free-floating handguard! A few to consider: 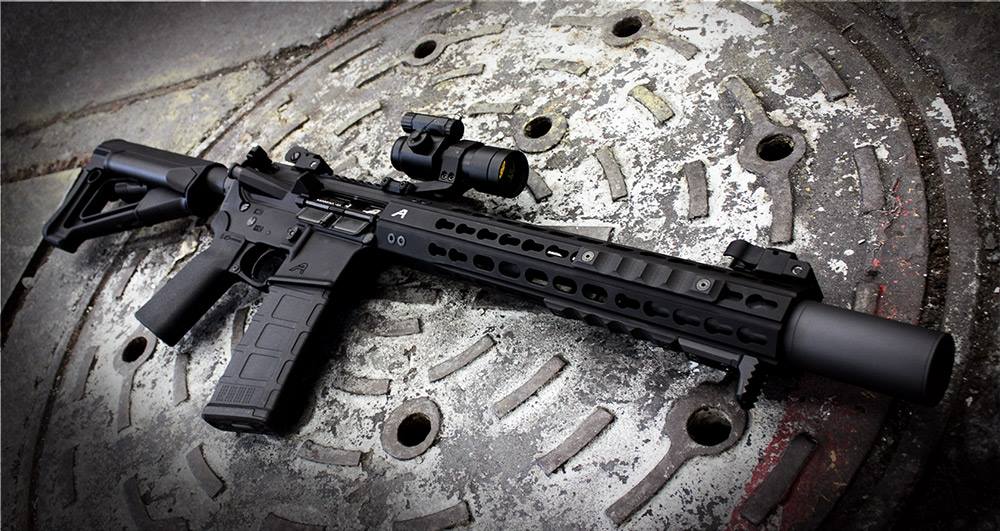 You may have noticed accuracy mentioned above. Barrel harmonics are an important part of accuracy because every time a gun is fired an explosion happens which causes the gun to vibrate. Because a free-float handguard is attached to the upper receiver of the AR15 - not the barrel, it allows the barrel to vibrate at a natural frequency.

Putting pressure on the barrel can also cause very slight warping which can also affect accuracy. Using a free-float handguard means there is no pressure on the barrel meaning warping will not be an issue. While this might seem like a minor issue it is something to take into consideration when purchasing a handguard for your AR-15 especially if you plan on hitting targets at medium to long range distances. After all, we didn't spend all this money just to miss right?

We aren’t all made of money so how much do these cost?! Well, they are more expensive than your average drop-in handguard which will run you $50-100 usually. Free-float handguards usually run between $100-$300 by themselves. This might seem like an instant turn off but the benefits far outweigh the cost in the end.

If you are building your own AR from the ground up however we might recommend looking at our complete uppers with free-float handguards and saving some money! Those may be seen here. We do a lot of the work for you and select/assemble the best components into easy to attach uppers and lowers so you can have the fun of building without the headache of trying to find individual parts.

When choosing a handguard for your AR-15 we need to take into consideration the accessories we’ll be mounting on the handguard itself, as well as the attachment system. A company called Magpul invented the M-Lok design and they license the system to everyone that requests usage - this means every time we see the term “M-Lok” we can be sure it is the exact same size and fitment.

M-Lok Rail Systems are what the U.S. Military chooses and are a very popular choice among the Ar-15 shooter community. Did we mention USSOCOM declared M-Lok the winner in their impact tests as well? M-Lok is a proven winner. We’d be hard pressed to find any attachment in the AR-15 world that will not work with M-Lok. M-Lok has become the industry stand for AR-15 handguard attachment systems.

KeyMod is another very popular attachment system with AR-15 handguards. You can identify KeyMod from the slot shapes on the handguard that resemble an old-fashioned keyhole. KeyMod’s design allows attachments to self-align as you tighten them down with an Allen wrench. KeyMod is seen regularly on AR-15 handguards but there is far more support in the industry at this time for M-Lok.

Drop-in handguards also come in something called a “quad rail” Quad rails have four Picatinny (read more below if not familiar) rails that run the length of the handguard. Keep in mind that these types of drop-in handguards usually are not a very firm base to mount an optic to as they tend to wiggle a bit and we can’t have that for our optic!

Picatinny is a numbered, standardized attachment system. The numbers allow you to always mount attachments at the same point and that can be very helpful. Picatinny is an undercut “T” shape with flat parts in-between. All you do is slide your optic or attachment on and then tighten them down. We’ll notice Picatinny rails on the top of almost every AR-15 upper out there right now.

One interesting handguard option we have seen recently is from a company called Cloud Defensive. This free-float handguard and rail system is optimized for use with their own OWL and REIN weapon lights. Featuring both Picatinny and M-Lok, the CORv2 allows for recessed mounting of these light systems and switches to keep your sight picture clear. Check it out here.

Note that this system would also be excellent for IR designators as it will allows them to sit recessed on the rail while bring out of your sight picture - making this free-float handguard an excellent choice for night time operations!

If performance is what we’re seeking, look no further than the free float handguard for our AR-15. Spending a bit more might seem like a bummer but in the end it will be worth it to have your AR-15 be perfectly customized to the shooter. You might consider building an AR15 instead of buying one also if customization is important to you. Check out our selection of AR-15 build kits here!