There's been a lot of speculation and talk back and forth about who is going to win the election, what's going to happen, and what it means for the future of the 2A. And, no doubt about it, this is a very important election. Unfortunately, it's hard to find objective news these days. It seems publications only pander to their readers, and they are all predicting a landslide victory for their respective candidate. The reality, is this is going to be a tight race either way.

A lot of customers have reached out asking us who we think is going to win, and what we think will happen when they do. Well, let us tell you first: We can't predict the future. What we can do though, is take an objective look at the currently available polling data, historical accuracy, and how 2nd Amendment cases have gone in the past. We're going to do our best to be unbiased here, use unbiased data (which we will link to), and provide an objective look at what we think is going to happen. I like to mention that we pull most of our data from sources like  FiveThirtyEight, which does an excellent job of collecting data and presenting it in an unbiased manner.

At the heart of this election (and any other), are the polls. And there has been a LOT of debate about these. We have seen every conspiracy theory possible floating around about these, and a lot of misconceptions about how polling works, or even how  statistical sampling works. In fact, we've even seem people claim that because polls were wrong last time, that that is proof that they will be backwards this time too. Which... is not really how numbers or statistics work. 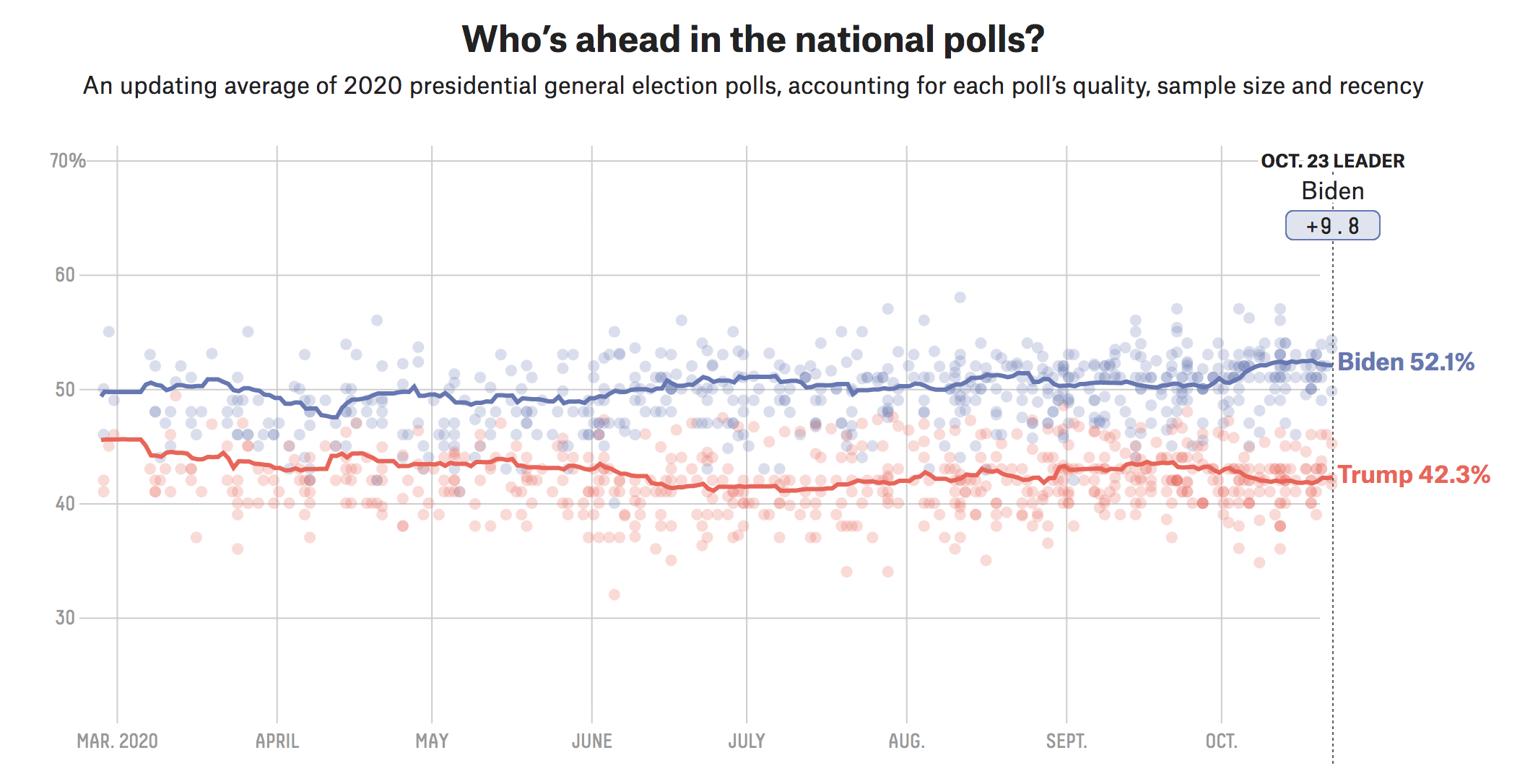 It should be no surprise to anyone reading this article that Biden is leading in the polls. It's been well publicized, and in some cases disputed. That's why it's important to not look at any one poll, and instead to look at an aggregate of multiple different polls. In fact, you can see each poll's "rating"  here. It gives you a letter grade score to how accurate polls have been in the past. It's also worth mentioning that any polls with any history of bias or foul play are completely dismissed.

So how does this stack up to the 2016 election? Great question! On this date in 2016, Hillary Clinton was polling at 47.8%, and Donald Trump was at 42.3%. What that means is that the Democratic base has grown, while Trump's has stayed largely the same. This data is also reflected in his approval ratings, which we will get into shortly.

First though, a lot of people have said that the polling data is irrelevant because they were not correct last time. And that's a fair point, even if a bit misguided. Why would we trust something that was wrong last time? 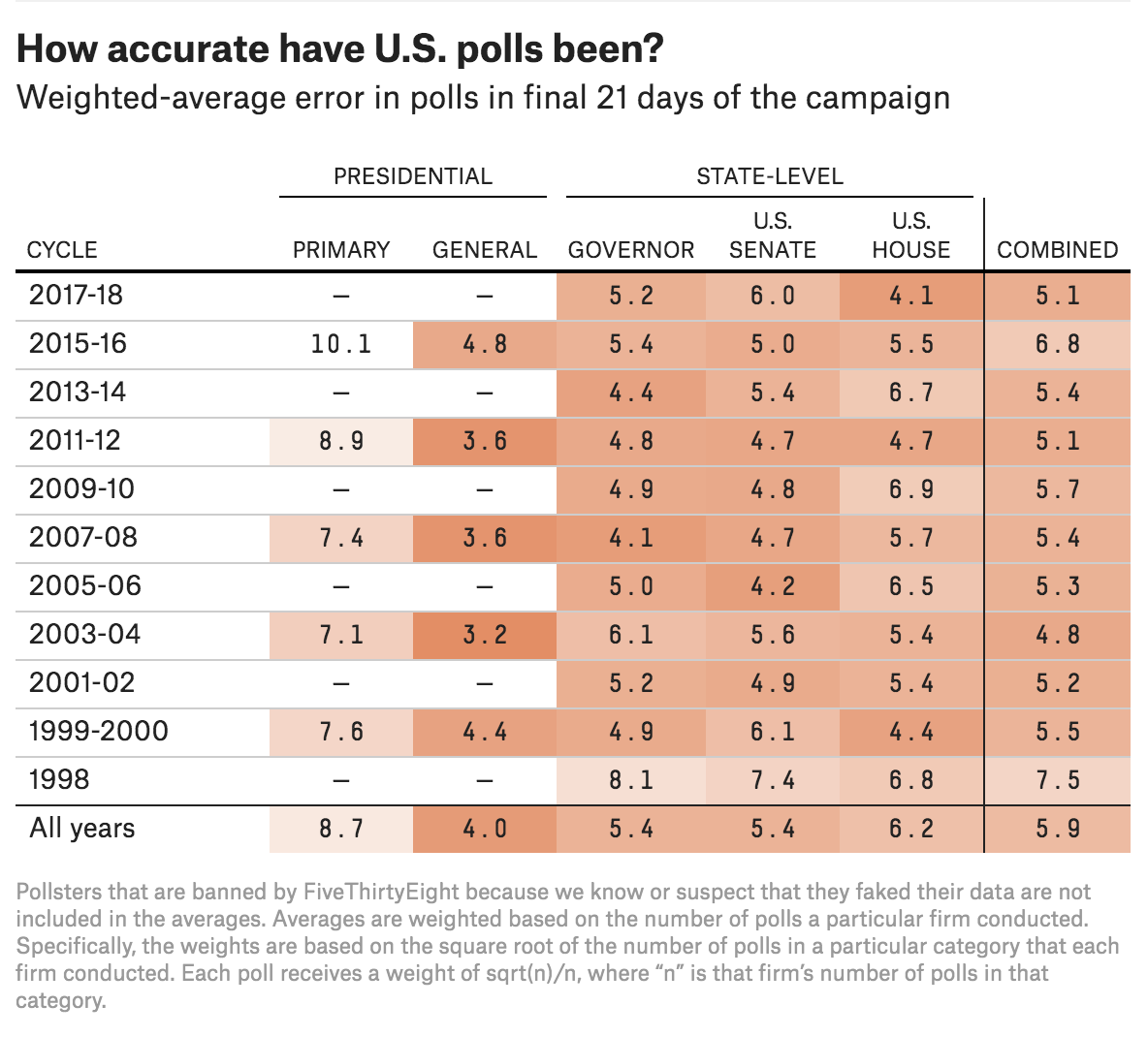 Historical data on the accuracy of the polls for presidential (and other) elections.

Of course, polls don't do us any good if they aren't accurate. In order to be accurate, a poll must collect data from a  randomized and statistically significant sample size. It doesn't do any good to collect data from people who align with one party, or who just live in one city, or one state, or race, or who are only blue-collar, or only white-collar. If you can truly randomize your selection, you can get an accurate sampling of 95% significant, with a +/- 5% margin of error, for a population of 350,000,000 people, by polling 385 random citizens.

Historically, presidential polls have been pretty accurate. A margin of error of +/- 4% is considered very accurate for a country with such a large and diverse population. It's worth noting that the final polls of the 2016 candidates were inside the margin of error for accuracy of the polls, which explains why they may have favored Hillary Clinton, but Donald Trump still won. It's also worth noting that right now Joe Biden has a lead outside of the margin of error, meaning that even if the polls are all at their most incorrect, he is still likely to win based on the data. Finally, polls are likely to be more accurate this year than last year (and will become slightly more accurate with each election), because they have new data-points to factor in. 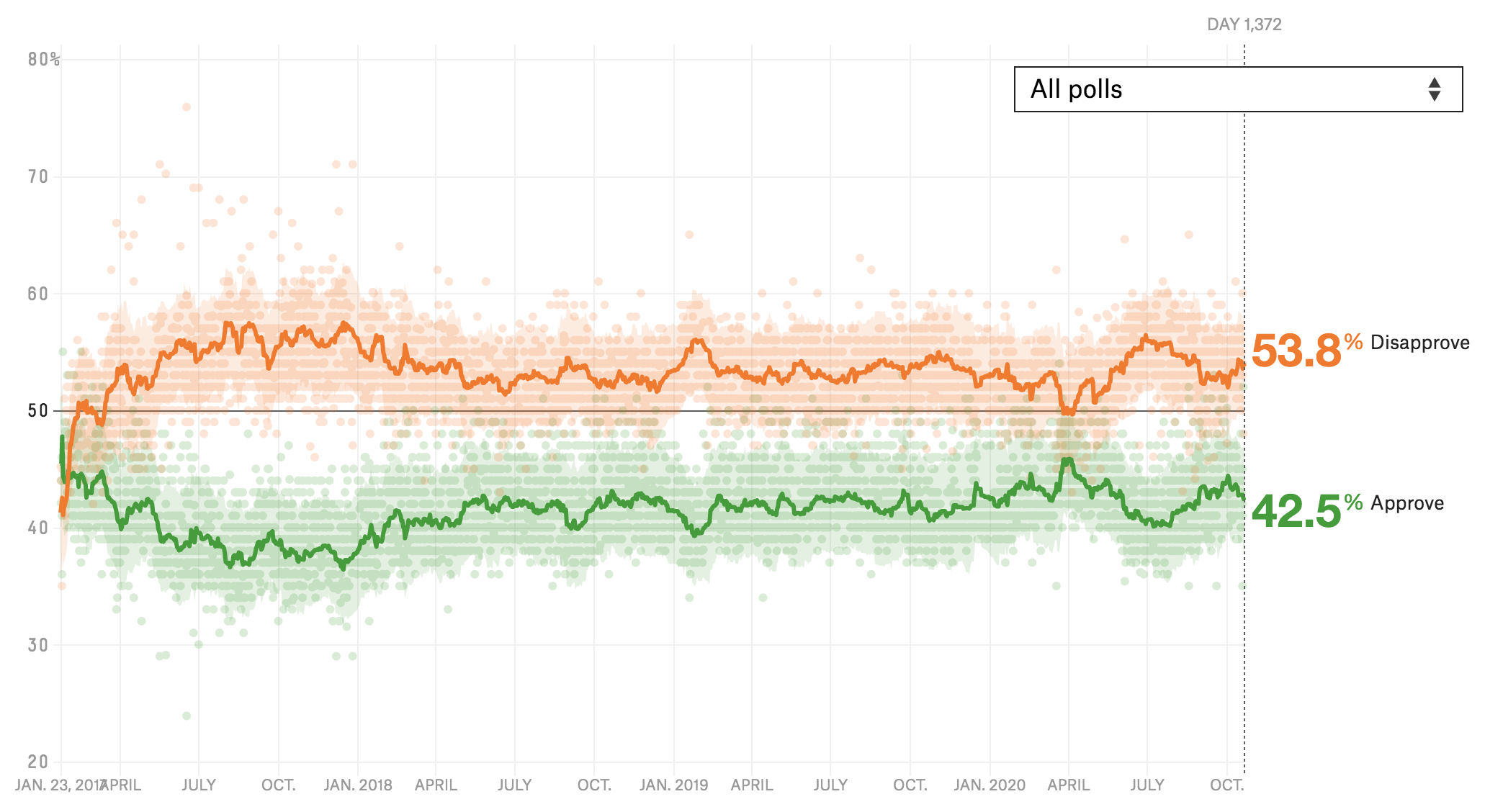 Donald Trumps approval ratings from his first day of presidency, until now

What about approval ratings though? There are another strong historical indicator of a sitting president's chances of winning re-election. And Donald Trump's base regularly refers to themselves as "the silent majority" (there's even a  merch website for him by the same name), so maybe it's these silent voters who will come out and sway the election?

Probably not. Trump has the  lowest average approval ratings since the Gallup Poll's inception in 1937. The important word there is: average. While several presidents have had lower approval approval ratings at one point in their presidency, those same presidents have also had significantly higher approval ratings than Trump has ever reached. And while his numbers have been slowly climbing, they have only once gotten close to where he was at inauguration. This implies that Trump has not retained all of his own base over this term, and the "silent majority", is very unlikely to sway an election. 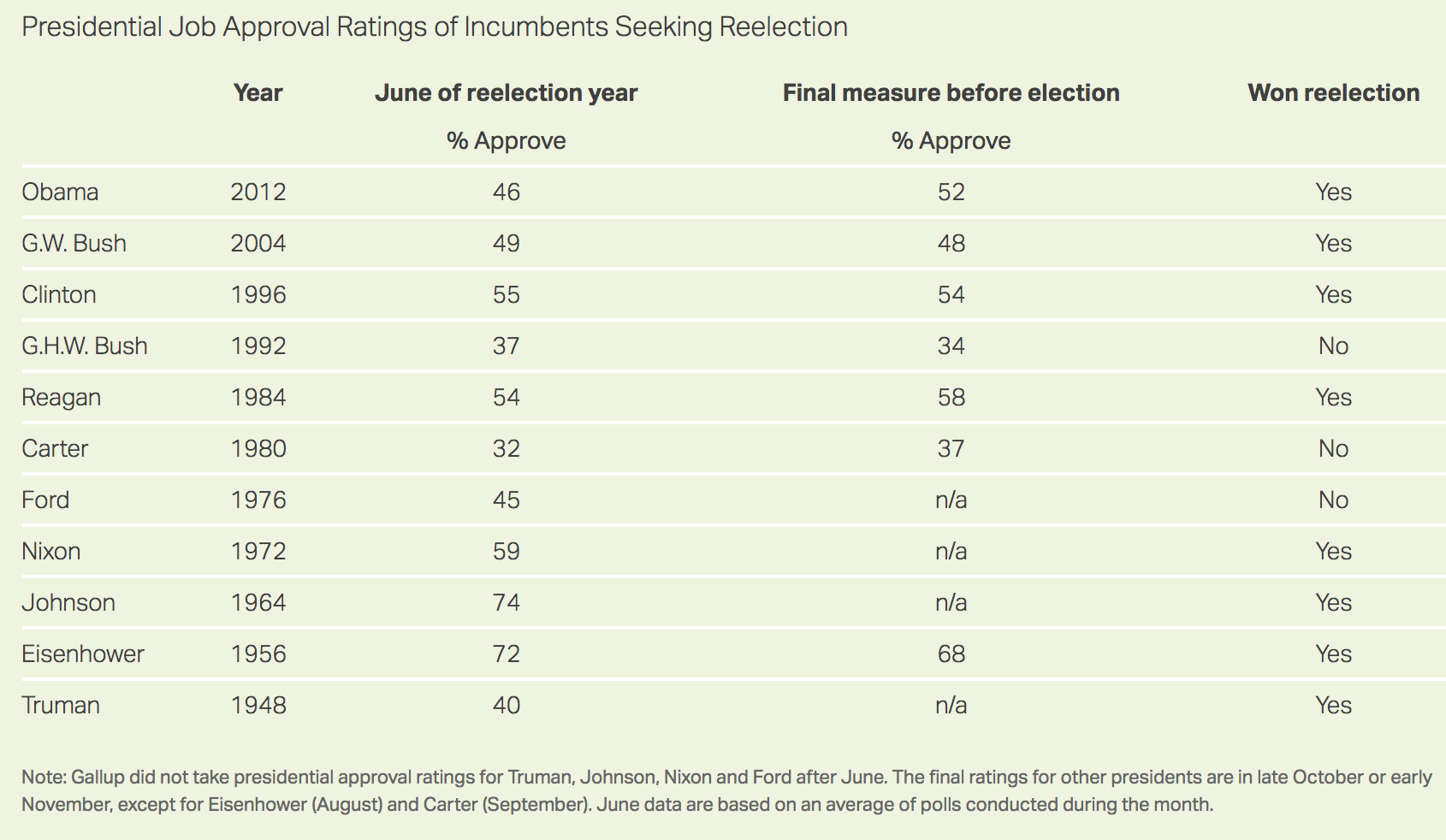 We wouldn't be doing a complete deep-dive into approval ratings if we didn't also look at what previous presidents have been at when they won (or lost), re-election. After all, if president frequently win re-election with low approval ratings, then it may invalidate some of this data, or at least widen the margin-of-error. However, that's not the case here. With Harry Truman as the outlier, every president who has won re-election has maintained close to a 50% approval rating leading up to the election.

President Donald Trump is currently at 42.5%, with 10 days to go until the election. This is about 5% lower than any president who has won a second term has been at, up until this point. 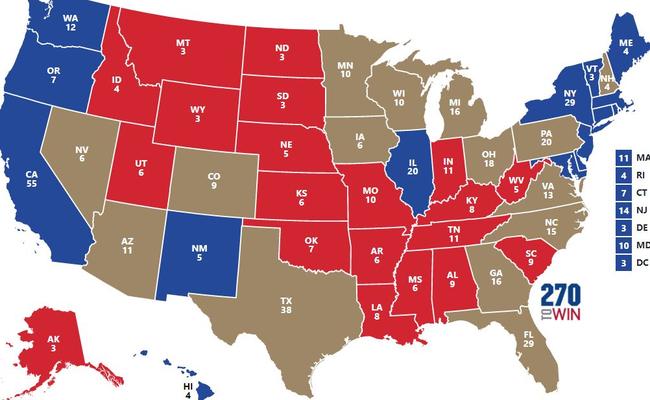 Lastly, we need to take a look at the proverbial "Swing States". These are the states likely to make (or break) an election. After all, we all know that California will go to Biden, and Montana will go to Trump. Most states are fairly predictable in their outcome, so the election tends to focus on the outcome of several states.

Looking at current polling data, and how it compares to the 2016 election, the data is a lot less clear than some of the other numbers we have looked at. States like Arizona were favoring Hillary, but Trump won by an even larger margin than his competitor was polling ahead at. However, Biden is now favored in Arizona much more significantly, so it can be tough to call.

Instead of focusing on one state, we look for trends. Across all the battleground states, the Democratic party is polling higher than it was in the 2016 election, with the Republican party only polling higher in Ohio, and not by a large margin. There are likely to be a few upsets and surprises (they are called Swing States after all), but on the whole it looks like Biden does have the edge here.

Who do we think will Win?

We believe Joe Biden will likely win the 2020 Presidential Election. We are also preparing for such, as we expect industry sales volume to hit record numbers. Joe Biden has a very public and  strong stance against the 2nd Amendment, and we do expect him to follow through with some of his threats. The ability to do so will likely depend on the outcome of the Senate & Congressional elections, and that has yet to be determined. Some have accused us of fear-mongering by suggesting that he may win, but we think it better to look at things realistically, and by the numbers. Believe us, we would be happy to be wrong. After all, we are one of the most targeted industries in gun-control legislation.

What does this mean for the 2nd Amendment?

Fantastic Question! That's what we're here to figure out after all. In short, not good things. For the long form, stay tuned for our follow-up article, which we will link here when finished.