You’re probably looking for an alternative to the .223 Remington or 5.56mm NATO for your AR-15 rifle. Two of the most popular alternative calibers include the 6.8 SPC (created by Remington) and the .300 Blackout (invented by “AAC” or Advanced Armament Corporation). Today, we’ll talk about the development and history surrounding these two rounds and compare them — to help you pull the trigger on one of them.

How did the 6.8 SPC come about? It stemmed, like several other calibers, from the thought that the 5.56mm needed more range, more penetration and more stopping power which is why the military has been looking at multiple 6mm calibers for the past few years to replace the longstanding NATO round. Initially, the tests conducted by the Army went rather well for the 6mm rounds that were being tested. But some of the barriers for adoption included NATO standardization and the need to rebarrel existing rifles in the military which just didn’t make sense logistically which is why it’s still taking a while to move away from the 5.56 NATO round.

Early production and development for this cartridge began as early as 2003. For the most part it was only Remington but Precision Reflex Inc. was also involved and actually to this day some of the best dedicated 6.8 SPC magazines are still made by PRI. Their steel mags just make feeding more reliable than other options on the market. Since the cartridge wasn’t about to win any military contracts at the time its hype kind of fizzled out.

But about five years later, from 2008-2010, the cartridge suddenly had grown in popularity in the hunting community specifically for hunting feral hogs as they’ve become quite the pest in southern states. The 6.8 SPC ammo had caught the attention of LWRCI which is a high performance rifle brand, which recognized the potential of this caliber.

One of the initial problems during the 6.8 SPC’s first hype train was that as demand for the caliber grew, rifles were being made before the ammo was being produced on a mass scale. This was problematic because barrels being made for the 6.8 Remington SPC hadn’t been finalized by SAAMI yet as there were two different specs for chambers. To add on to that, while technically you only need to swap out a barrel to be able to fire 6.8 SPC out of a preexisting AR-15, there are a whole host of issues that affect reliability and performance such as:

So to remedy these issues LWRCI designed their own 6.8 SPC lower and upper receiver, essentially a standalone 6.8 rifle (SIX8-A5 Razorback) which had an enlarged magwell to fit specifically 6.8 SPC dedicated magazines that were wider and longer, allowing for 30 rounds capacity. Their 6.8 SPC magazine also had a new follower and the new rifle design came with an ambidextrous bolt safety catch including a new bolt carrier group that had an enlarged extractor to ensure reliable extraction for the bigger casing (compared to 5.56). They even developed a PDW version (SIX8-UCIW) that has a 8” barrel which was and still is highly desirable.

The LWRCI’s “Six-8” rifle is interesting because it’s an AR platform that uses an external short-stroke piston including an adjustable gas setting for with and without use because this rifle was created with the hopes of it becoming the next generation battle rifle (your typical AR15 is going to be using a direct impingement system). Overall, LWRCI created an incredibly reliable and high performing rifle chambered in 6.8 spc which really substantiated the caliber and put some wind in its sails. The Six-8 is incredibly expensive because the entire rifle was built around the 6.8 SPC and isn’t a mickey mouse build from AR-15 parts that you hope will have just about the right tolerances and specs for the gun to work consistently or “well enough.”

That’s not to say though that it isn’t possible. It certainly is, it just takes much more research, experimentation, trial and error to find that sweet spot when fine-tuning an ar15 chambered in 6.8 REM SPC.

In the end, the U.S. Army tested 6.8 spc against 6.5 grendel to replace 5.56. Good results for both 6mm rounds. Never happened. But both calibers have a cult following for hunting. However, it seems a 6mm cartridge is still the answer in replacing the 5.56 as the Army looks to be soon adopting some sort of plastic 6.8mm round developed by Sig Sauer.

What is SAAMI Specification? 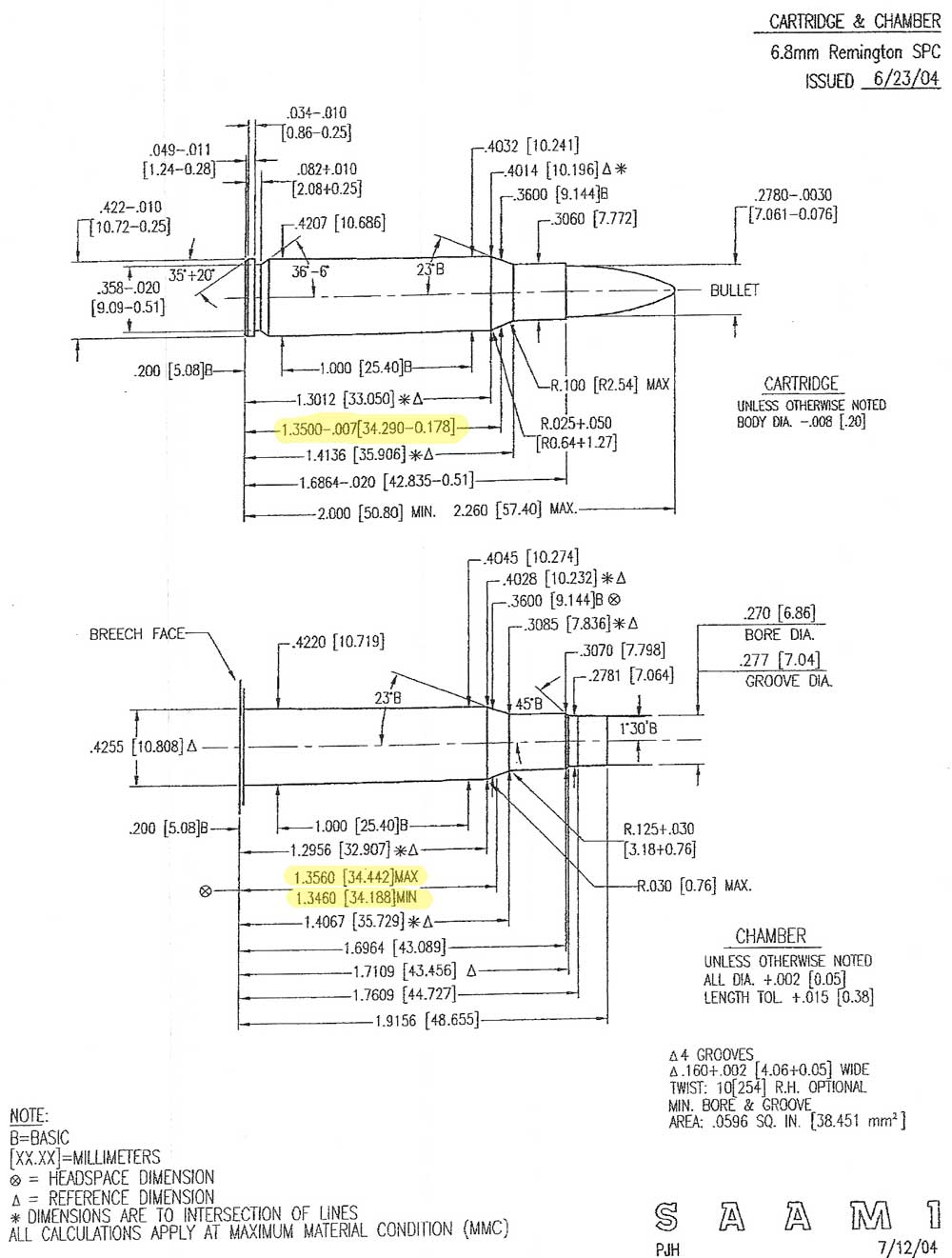 SAAMI stands for Sporting Arms and Ammunition Manufacturers’ Institute (pronounced like the name “Sammy”). SAAMI is an association of American manufacturers of firearms, ammo and components. They are an industry sponsored organization which sets the production standards for sporting arms and ammunition. The parameters set by SAAMI inform the industry with safe and reliable minimum and maximum specifications for chambers and ammunition so that all products can be interchangeable within their designated caliber or gauge. 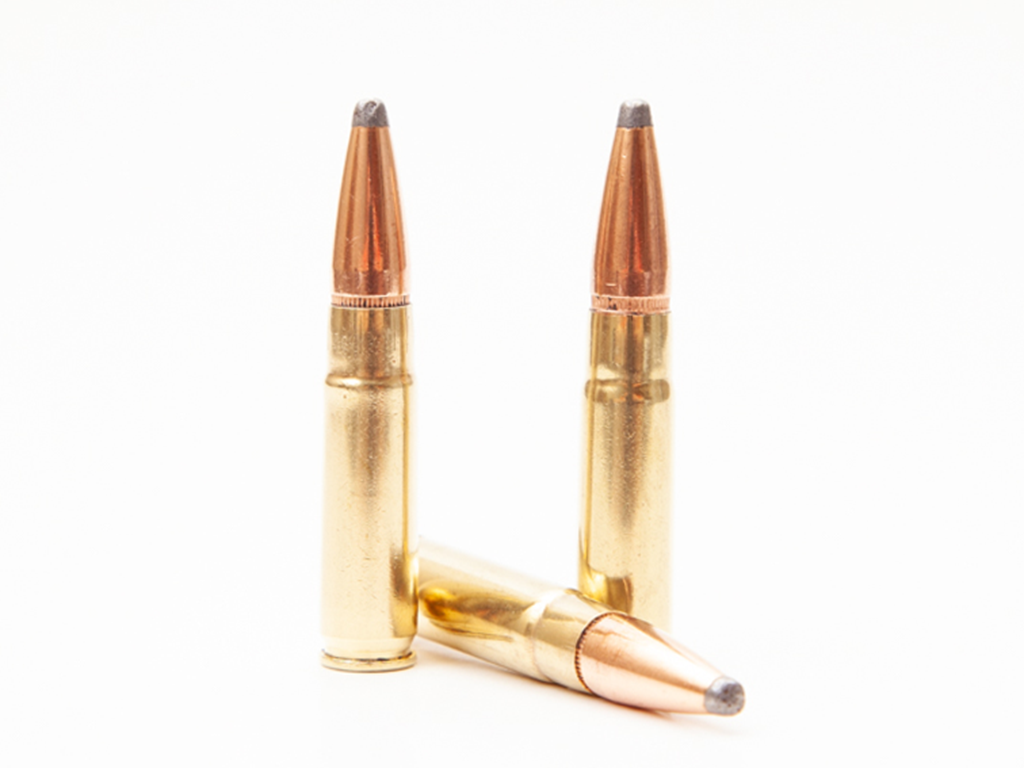 Developed by AAC, (Advanced Armament Company) .300 BLK is one of the most popular caliber options for the AR15 after .223 Remington and 5.56 NATO. Well the reason for that is because this 30 caliber round doesn’t need much real estate in terms of barrel length to perform at its best or even just optimal conditions. This cartridge is kind of a show stopper and we’ll talk about why that is. 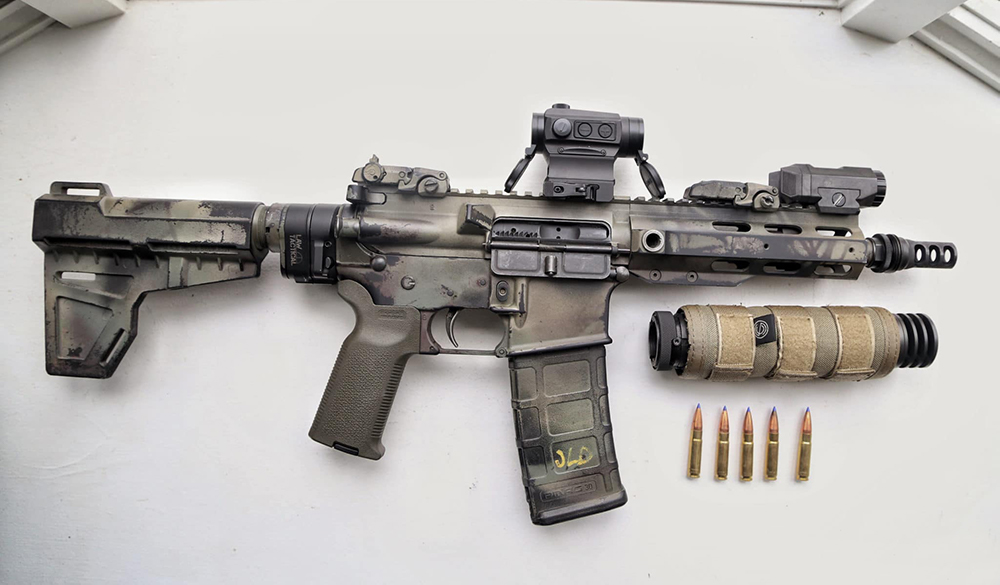 The 300 BLK originally came from the 300 Whisper, a 30 caliber round solely designed for suppressed shooting. To make it clear, the Whisper and the Blackout are definitely not the same thing. Think of it like how with certain rifle barrels they can shoot both 5.56mm and .223 Rem. It’s exactly the same idea here with the Whisper and Blackout. With the right loads, you can shoot a .300 Whisper bullet out of a .300 BLK gun but not the other way around.

AAC was founded in 1994 right as the first federal “assault weapons” ban was passed. They got their start in manufacturing suppressors and in 2009 AAC was acquired by Remington. With Remington at the helm, AAC developed the 300 AAC Blackout. Remington submitted the results to SAAMI to be standardized and 2 years later, in January of 2011, SAAMI approved the cartridge.

A decade has passed since and now over 100 manufacturers produce 300 blackout ammunition. Which is in part why the caliber is so popular — it’s widely available and highly effective as both a subsonic and supersonic round that’s capable of just about any application whether its for the military or general civilian population. 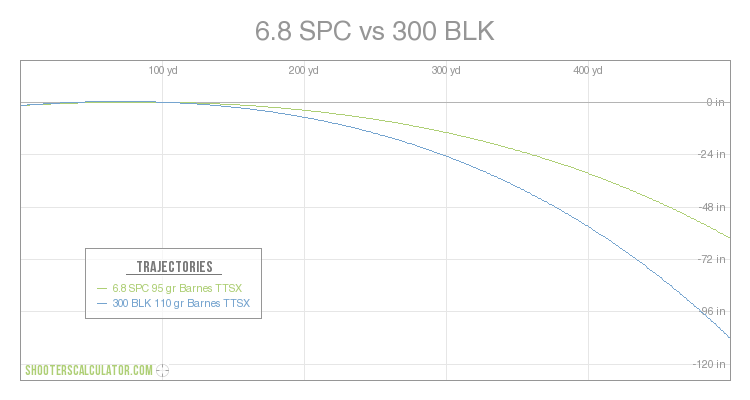 If you’re looking for a flat shooting, hard hitting hog round, this is a more than viable hunting caliber that also works well for putting down deer. The 6.8 SPC was designed for use by the Army marksmanship unit and if you look at the chart above you’ll see that the round can reach out and touch something very reliably even with factory ammo up to 500 yards out with the kiss of death. Depending on the size of game you’re hunting 400 yards may be more realistic.

Remember that the original intent behind the development of the 6.8 SPC was for a more powerful round. When using .223/5.56, there are some limitations when you because the bullet is just that much smaller. WIth 6.8, it opens up a wider range of potential game that can be downed with your AR-15 with the larger and heavier projectile. Or put it another way, of course 5.56 can put down deer and feral hogs, but with 6.8, it’ll take less rounds to do and can take on slightly larger sized game..

Similar to the .300 BLK, the 6.8 SPC can also be shot out of a shorter barrel if the rifle is tuned correctly which again just goes to show how this caliber is really best for anything under 300 yards which is akin to the 5.56mm’s ballistic data as well except with much more kinetic energy travelling behind it.

Due to its fantastic terminal ballistics, the study of how bullets interact upon impact and penetration of their target, the .300 BLK is very popular in multiple walks of shooting life. How? Well, the 300 AAC Blackout’s ballistic capabilities are similar to that of a 7.62x39 round but the cartridge’s base diameter is small enough to fit in AR style rifles. Extra bonus: 300 AAC Blackout fits in regular .223/5.56 magazines as well. In short, it packs a wallop and makes a big hole. It also certainly helps that this round only needs 8 or 9 inches of barrel length to fully burn all of its powder making PDW and very short carbine-AR pistol builds highly viable with this caliber.

The round is also very versatile as it can be shot in subsonic and supersonic loads. Subsonic loads work best paired with a 300 blackout suppressor making for an even quieter shooting experience. Subsonic rounds don’t break the sound barrier so there isn’t that sonic crack sound when shooting these rounds, making it a good choice for personal defense as well. Supersonic ammo is any round that can shoot over 1100 FPS, which the .300 AAC definitely can do. You’ll want supersonic rounds for better range and a flatter trajectory in the bullet’s flight path along with more stopping power.

However, in terms of external ballistics (the study of factors affecting the flight path of a bullet after being fired from a 300 blackout barrel which considers initial velocity, the force of gravity and atmospheric conditions) the .300 has very significant bullet drop once it starts flying past 200 yards. As you can see in the chart above, the 6.8 SPC starts to leave the 300 blackout ammo in the dust in terms of required holdover to accurately hit a target. This demonstrates why the 300 AAC BLK is a fantastic close quarter combat cartridge but not an optimal long distance precision round.

Within the reloading community - A lot of reloaders who handload like the 6.8 SPC because they can really tailor the round to their rifle based on bullet weight, powder, length of rifle barrel, twist rate, all to get that perfect 1000 yard match performance. Several users of the 6.8 will boast getting sub minute of angle loads at 100 yards and plenty of manufacturers still make ammo for it as well —— so it’s not a dead caliber as it still garners its own sort of cult following. If you’re looking to reliably and accurately shoot at basically anything under 300 yards, this is a great choice.

Why Choose the 300 Blackout?

An absolute knockout option for intended use with targets at 200 yards out and under. Reference the bullet drop chart above and you’ll see that once you hit 300 yards the bullet drop is 2 feet from the point of aim which is too much, especially if you’re shooting on the move. If you’re looking for a serious home defense rifle build, 300 blackout is an awesome choice for it being able to be shot out of a very short barrel and have a much bigger impact than .223 or 9mm would.

Either of the calibers sound like what you need in your life? You can get started today by buying the AR-15 lowers parts you need to complete a 6.8 SPC or .300 BLK build. The 6.8 SPC can share the same exact lower receiver, upper receiver and lower parts kit as a 5.56 rifle would use. For optimal performance we’d recommend getting the 6.8 SPC barrel along with a dedicated BCG for that caliber. If you’re more interested in an Ar 15 300 blackout build we have an 80% build kit with everything you need to finish that rifle, which is much easier, since the only thing you really need to do is swap out the barrel from an existing 5.56 set-up and you’re good to go.