On the topic of Afghanistan — it’s been a tough couple of weeks. We want to thank all our veterans out there who served and sacrificed not only for US sovereignty but for the people of Afghanistan too. The notion of a democratic Afghanistan wasn’t always a complete pipedream. There was certainly progress made in the larger cities such as Kabul, Kandahar or Herat which allowed girls to attend school and even pursue STEM education research such as robotics engineering.

That all came to a definitive close as US troops abruptly exited the country; leaving a stockpile of arms and vehicles doesn’t even come close to describing what the Biden Administration left behind for the Taliban to take for free which we will most certainly come to rue the day when billions of dollars in US weaponry returns to bite us or allies from behind.

Anti-gun grabbing politicians can denounce gun violence all they want but the hypocrisy is just astonishing as it puts a really bad taste in our mouths when you take a look at the breakdown of what those same politicians allowed our literal enemy and foreign adversary to have when we, US civilians aren’t allowed to have ourselves. Below is a complete list of (that we know of thus far) of the weapons we lost in Afghanistan provided by Ammoland News: 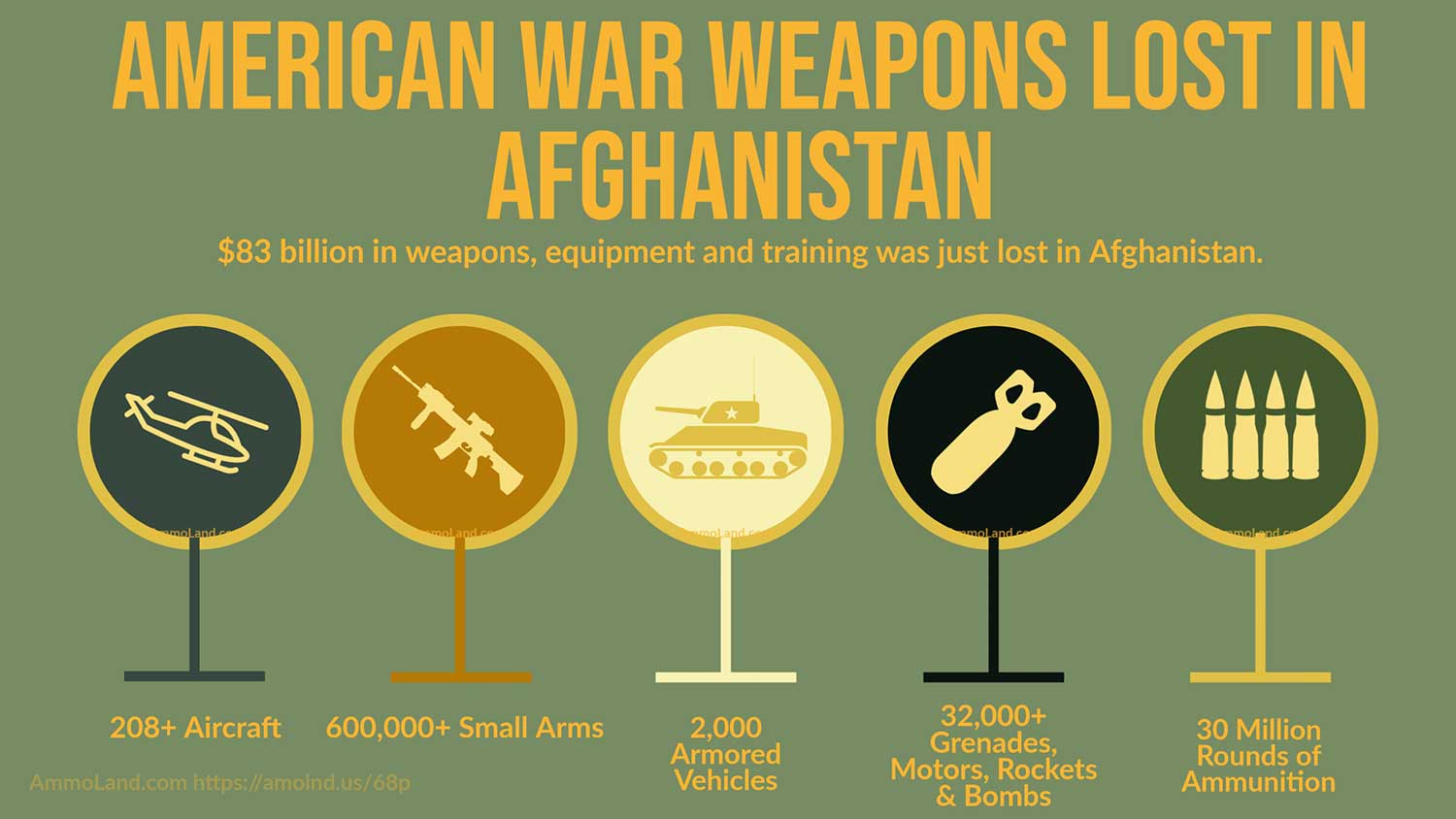 The main headline here is that yes, the Biden Administration has banned the importation of Russian guns and ammo. A reasonable knee jerk reaction would be to panic buy all the AK’s and 7.62mm ammo you can find but let’s pause for a second. While this will undoubtedly have an effect on the US market for AK lovers and ammo buyers of all calibers alike — what specifically happened was that the State Department announced it would be denying any future approval for applications to import firearms and ammunition from Russia.

The State Department also stated in the CBW ACT Sanctions that “existing applications that have already been approved would not be revoked.” So we can still expect some shipments of AK’s and various Russian ammunition to be coming in for the foreseeable future. Make no mistake, this is a blow to the gun community for sure. But the reason we’re not panicking is that most AK’s that builders/buyers get in the US don’t even come from Russia. They’re often sourced from Hungary, Romania, Yugoslavia or China from brands like WASR, Zastava Arms or Norinco. So it’s ok to breathe for now but to see the aftermath from this new sanction against Russia, we’ll probably have to revisit this topic in another year.

The ATF has been very publicly visible in the past few months with the controversial nomination of David Chipman, the new proposed rule to redefine what a firearm or ‘frame’ is and pistol braces being on the chopping block yet again. Now, the ATF has set their sights on a new company called Rare Breed Triggers. The product in question is what’s called a ‘forced reset trigger’ (dubbed the FRT-15) which allows a trained user to shoot as fast as their trigger finger can go. It’s so fast, that the ATF just couldn’t let it go.

At the beginning of August, RBT received a cease and desist order from the ATF and demanded an action plan for all “machine guns already distributed.” In RBT’s response letter to the ATF, they refuted the agency’s claims of the drop-in trigger being a “machine gun” as it had been previously examined and reviewed by prior ATF agents before being manufactured. Per the ATF’s own definition of what constitutes a machine gun, the FRT-15 does not fit it as it requires a pull of the trigger for every single shot fired out of the rifle it’s installed in.

Did the current ATF agents in charge of this case not do their homework prior and simply serve a cease and desist letter based on a couple of marketing videos? This case is important because it’s not another situation of the ATF simply flip flopping on a previous determination letter, but rather, it shows a clear desire for this wanton agency to infringe on the American people’s rights while ignoring the precedence set by their own rules and regulations. We’ll continue to follow this developing story and update you accordingly.