WAR! Ukraine Has “Officially” Been Invaded By Russian Forces 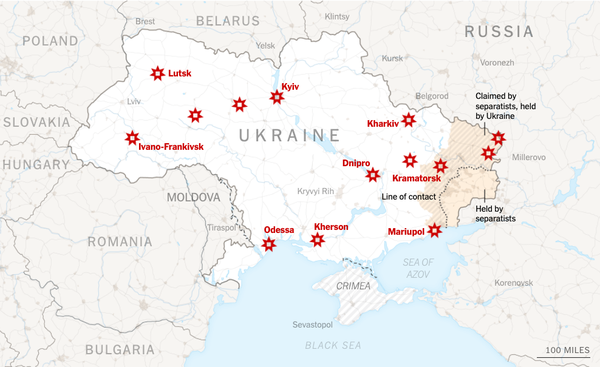 While the events in Ukraine are definitely affecting us here already in the United States as the price of crude oil per barrel had risen to $105 after the Russian invasion, hurting us all at the gas pump — we’re actually not particularly worried about this conflict but it does bring very real concerns about what future conflicts make look like between world powers.

Why is Russia invading Ukraine? It’s sad that it takes Instagram and TikTok posts for the world to take notice of Ukraine’s dire situation right now. But if that’s what it takes, so be it. We’re seeing a lot of raw footage online from the past 24 hours of rocket and missile attacks on airports and civilians resulting in dozens of lives lost already. The footage on social media is coming from all parts of the country (as can be seen on this map of reported attacks thus far by The New York Times in the image above) and the amount of information that can be found is extremely extensive. We’re covering world news this week because we hope this will be the worst of it but chances are it’s a testing bed for nations like China to see what would happen if they invaded Taiwan which would be one of the more probable powder kegs that could set off World War III. 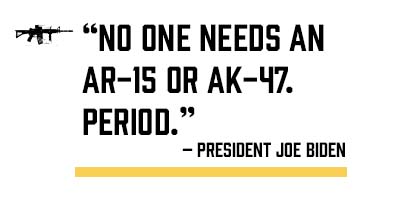 Here’s why we aren’t terribly worried for now— It is our opinion that this is a prime example where a country’s government operates without the public support and against the will of the people. Most Russian citizens woke up on Thursday morning to find out that their country had waged an unprovoked war against innocent people. On Twitter, videos are being posted showing thousands of people protesting the Russian invasion of Ukraine, ironically, in Putin’s hometown of St. Petersburg. Due to anti-protest laws in Russia, their police were busy arresting hundreds of people. This was also happening simultaneously in other major Russian cities.

Does anybody remember Biden saying these words? "No one needs an AR-15 or AK-47. Period." Try telling that to the people of Ukraine. The current conflict in Eastern Europe is exactly why continually securing the Second Amendment is essential to ensuring the freedom of all Americans. Not to sound like a broken record, but what do you think would have happened in the 2019-2020 Hong Kong riots if the Cantonese had guns? They probably wouldn't be an "official special administrative region of the People's Republic of China" today. Instead, they might have been able to remain their own sovereign state. As we can see with Ukraine, at least their president had the sense to offer firearms and ammunition to any Ukrainian willing to take up arms to defend their homeland. Hopefully it doesn't come to a Red Dawn situation for Americans to start appreciating their 2A rights we all should but private firearm ownership in the US is an obvious deterrent for any foreign adversary remotely considering an invasion on our soil. Ironic how mainstream media is applauding civilian Ukrainians' bravery for taking up arms while they condemn law abiding gun owners in American all in the same breath.

Now, there still is the possibility that all bets are off for the conflict to further escalate should Ukraine formally join NATO (which Putin has said would be his last straw) but with how fiercely the Ukrainian people are fighting back, reports have already come in saying that the Ukrainian forces are maintaining control over their cities and have already reclaimed a couple of airports. Also, there's really no need for Ukraine to join NATO as the United States' status quo is to simply continually provide military aid at an arms length distance, i.e. sending Javelin (anti-tank) missiles. If the fighting did get worse, against Ukraine’s favor, surrounding countries such as Moldova, Bulgaria and Poland would likely join in to help defend them from the Russian incursion.

The United States has also unveiled their new measures that would be taken in sanctions against Russia which would be incapacitating their economy by cutting them off from the SWIFT payment system… What’s more, the UK’s Prime Minister Boris Johnson has already announced his intentions of holding a war tribunal to try Putin for war crimes along with any Russian national that kills a Ukrainian citizen. Old Vlad is starting to remind us of Vin Diesel in the latest Fast and Furious movies... In every sense of the saying, Putin is now fighting a war on multiple fronts and we think it’s only a matter of time before the stark reality of the situation catches up with him. 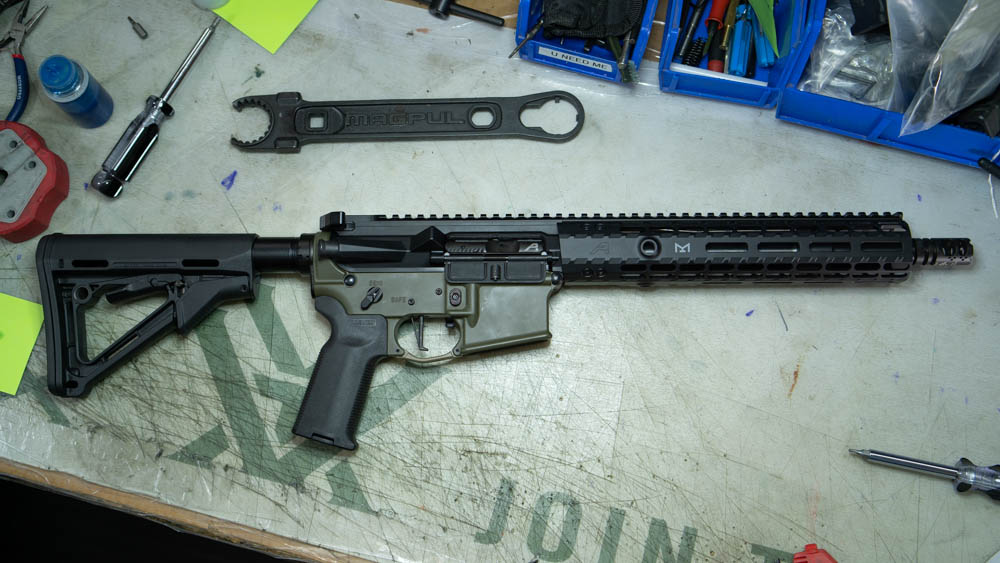 Don’t worry we’re not all bad news. To end this week’s newsletter with a breath of fresh air and on a slightly lighter note, Congressman Chip Roy (R-TX) has introduced a very interesting pro-gun bill. It’s called the “No Backdoor Gun Control Act.” At a glance it sounds like another ploy the anti-gunners are pulling to give the ATF even more power over the American gun owners but it’s actually the opposite!

The new bill targets the ATF’s ability to use the “Any Other Weapon” (AOW) legal definition to regulate any short barreled rifles and short barreled shotguns. Roy and his congressional allies are wanting to cover all their bases in completely removing SBR’s and SBS’s from the National Firearms Act’s purview by combining this new bill along with H.R. 412 - (NFA SBS Act) and H.R. 1758 - (Home Defense and Competitive Shooting Act).

Fingers crossed for these bills to pick up some serious steam. We’ll definitely keep you apprised of all updates as this sort of legislation would be huge in giving gun owners and builders alike some breathing room so we don’t have to be so scared of what’s “compliant” and not all the time just because of barrel length.

In an act of political grandstanding, Prime Minister Trudeau gave a speech about how he planned on standing against authoritarianism of Russia while ironically, he’s crushing his own people. It’s been one big week after another so it’s understandable if you missed this piece of news but our neighbors up north just went through a very serious event where a coalition of truck drivers and their supporters organized to protest in Ottawa, Canada against the restrictive COVID-19 vaccine mandates which made it difficult for them to work if they weren’t vaccinated, especially if their routes involved crossing the US-Canada border often which would have forced them to quarantine upon returning home. Drivers across the entire country began the long drive in the west to meet in their capital, Ottawa, on their east coast to protest and of course, to disparage their Prime Minister Justin Trudeau. Along the way, this group began being called the Freedom Convoy. Their demands were quite simple, to drop the mandates and let them work.

The reason why the movement picked up a lot of traction and public funding via the internet though was because these issues echoed the same sentiment many people felt about Trudeau and his politics which have created frustration and resentment for his pandemic measures that are now commonly seen as political overreach. You can see what the truckers’ message and demands were here along with Jordan B. Peterson’s response (a famous Canadian clinical psychologist, author, former professor at the University of Toronto and now a YouTube personality) regarding the Freedom Convoy’s protest. 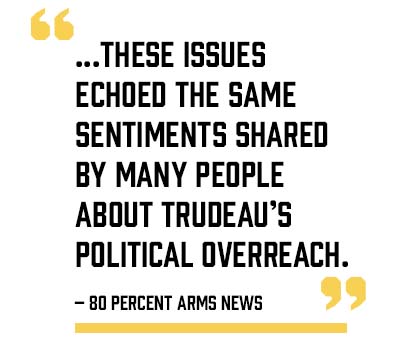 Footage of protestors getting beat and trampled on by riot police and their horses made headlines. It was dubbed the largest law enforcement operation that has ever taken place in Canadian history which has given even more fuel to the common conspiracy that Canada is part of a globalist network. People were in disbelief with the level of police presence(it’s their capital, shouldn’t have been that surprising). Still, the protestors didn’t take the bait and remained peaceful, largely remaining true to their stereotype about being kind. As laws and real changes were beginning to be made four different provinces, some protestors packed up to go home as the event has been winding down now for about a week and a half. However, although the protest had technically ended last weekend after police had arrested almost 200 protestors and towed 57 vehicles... law enforcement officials are planning on selling the impounded vehicles via auction. Canada's House of Commons also voted on affirming “ Emergency Powers” which would give Trudeau himself powerful political tools to prevent any future vehicular blockades caused by protests.

Canada has been on our radar for a couple years now because of their confiscation of private citizen’s guns and the removal of their right to bear arms. But the overarching problem is that when governments take extra privileges and powers, they will always be extremely hesitant to give that up. Regardless of your feelings or beliefs towards COVID-19 or the vaccines for it, it is undeniable that the ability for governments to abuse their new found control over the people is far too easy. 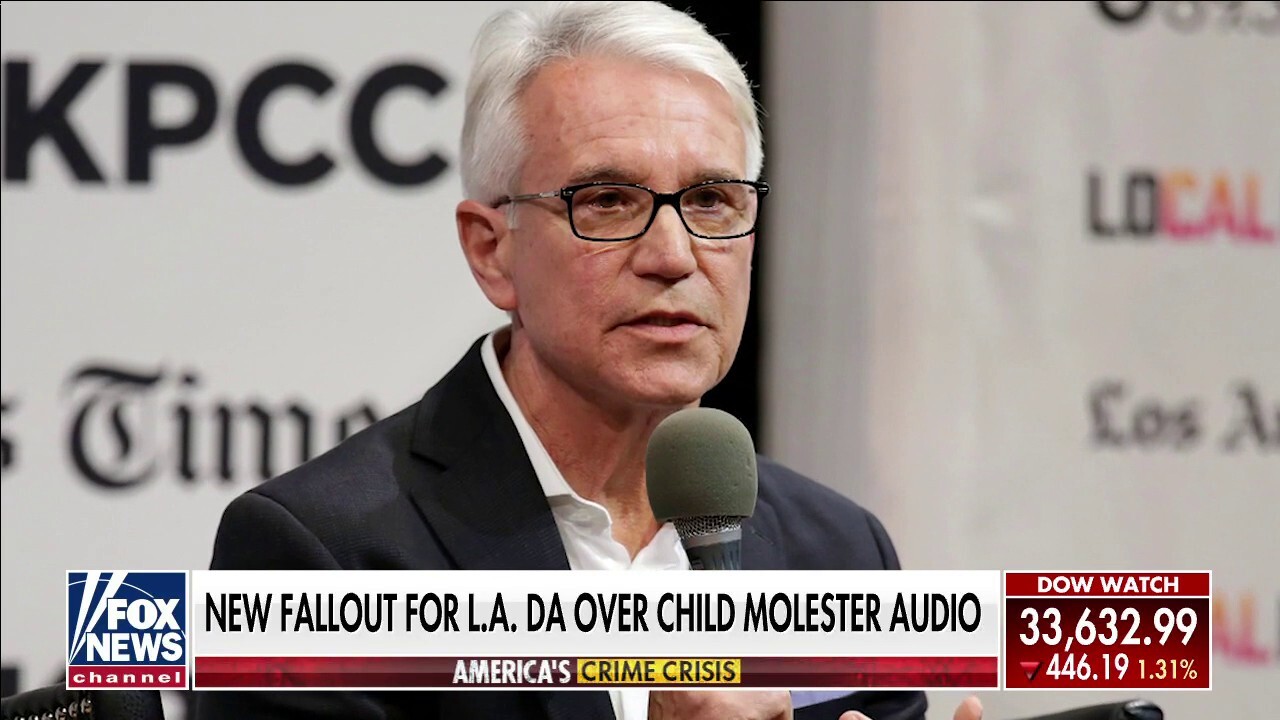 Our news feeds these days often sound like the beginning of a bad Netflix movie. News anchors and mainstream media websites spouting off about violent crime surges here, there, everywhere and of course attributing it to gun violence or “the proliferation of ghost guns.” What if the contributing factor is something more painfully simple and obvious? Instead of solely focusing on the methods of criminals and their tools they choose for their “trade,” what about the judicial framework set in place to deal with these sorts of people?

Well, look no further than Los Angeles’ own District Attorney George Gascon. A vile, soft-on-crime politician that is only exacerbating the large fluctuation in criminal activity here in Southern California. Due to a senseless proposition passed in 2014 (titled the “Safe Neighborhoods and Schools Act”), shoplifters who steal items amounting to less than $950 were reclassified as misdemeanor crimes and not felonious ones. This meant and still is the case that criminals can commit multiple thefts in a day, barely spend a day in a local jail and be back on the street the same week committing more thefts. You may have seen those mass ‘smash and grab’ robberies at high end stores in California on the news over the holidays; this would be why and how those crimes were being committed at such an alarming rate. Why go to school and work hard when you can just be a career criminal right?

DA Gascon and other rogue prosecutors alike have all argued for and implemented policies for misdemeanors to not be prosecuted and lighter sentences for serious felonies and pushed for the elimination of cash bail. The result? Mass shoplifting, open prostitution, drug markets and yes, increased record numbers of shootings and murders. Giving a pass on lower level crimes breeds more serious misconduct. What about you, what’s your state governor and local district attorney doing?