Part of the explanation of what is considered as a "firearm precursor part" in CA DOJ Guidebook (Photo Source: CA DOJ)

As an update to the standard capacity magazine ban situation in Washington state, we talked about how WA was also trying to sneakily pass another bill a couple weeks ago, HB 1705 simultaneously hoping that none of us would notice. The bill was essentially a carbon copy of the NPRM (new proposed rulemaking) 2021R-05 which would not allow normal citizens to purchase, build or own their own privately made firearms unless it was bought from a licensed dealer (FFL). As of now, HB 1705 has passed both Washington state’s House and Senate meaning all that’s left is for the governor to sign it into law. Given that Governor Jay Inslee of Washington is a Democrat, it’s extremely likely that it will pass and this new bill will go into effect beginning July 1, 2022.

Now, California has also decided that they will not be betting on the ATF or waiting for them to make a decision earlier than this June. California wants to do their own version of that with regard to 80 percent lowers. On February 22, 2022, CA DOJ proposed “emergency” regulations to require all Californians who wish to purchase a “firearm precursor part” to first undergo a background check identical to the current requirement for ammunition purchases. Under emergency rulemaking policies, Californians only have five days to publicly comment and unfortunately this story got by us as the war in Ukraine broke out last week. 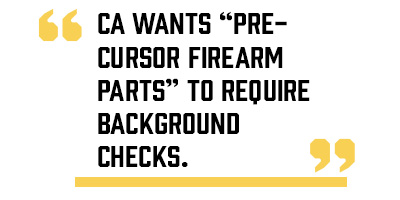 This all sounds very scary at first - upon digging into this a little deeper it started to bring up several questions for us. If you just go by the phrase used by the CA DOJ, “firearm precursor parts” in our minds sounds like not only the lower receiver, but the lower parts kit, buffer tube kit, triggers, handguards, barrels, gas block or tubes, upper receivers, and bolt carrier groups; essentially any of the major components needed to “complete” an AR-15 rifle build and make it function. Going off of that assumption many have been quick to jump to conclusions and rightfully so!

However, based on the original source of where this story broke from, that assumption may not be entirely correct. In their article, the California Rifle and Pistol Association provided a link to the CA DOJ’s proposed regulations. They also included a link to the CA DOJ’s “Firearm Precursor Part Identification Guidebook.” If you read the guidebook all it shows is 80 percent lower receivers and 80 percent pistol frames with no mention of other firearms parts or accessories.

That’s not to say that this makes the proposed regulation any better, but it might mean that multiple sources online are providing a premature explanation of what's actually happening. Will CA DOJ expand on their definition of “firearm precursor parts?” We’re waiting to find out. Despite it being March 4th now, we’ve yet to hear any final decisions from the CA DOJ. Going full circle, it’s pretty terrifying that states are going above and beyond to limit the 2nd Amendment on their own without federal guidelines requiring states to do so. Just another facet of the anti-gunner politicians implementing our “death by a thousand cuts.”

Alabama and Ohio on deck to Pass Constitutional Carry 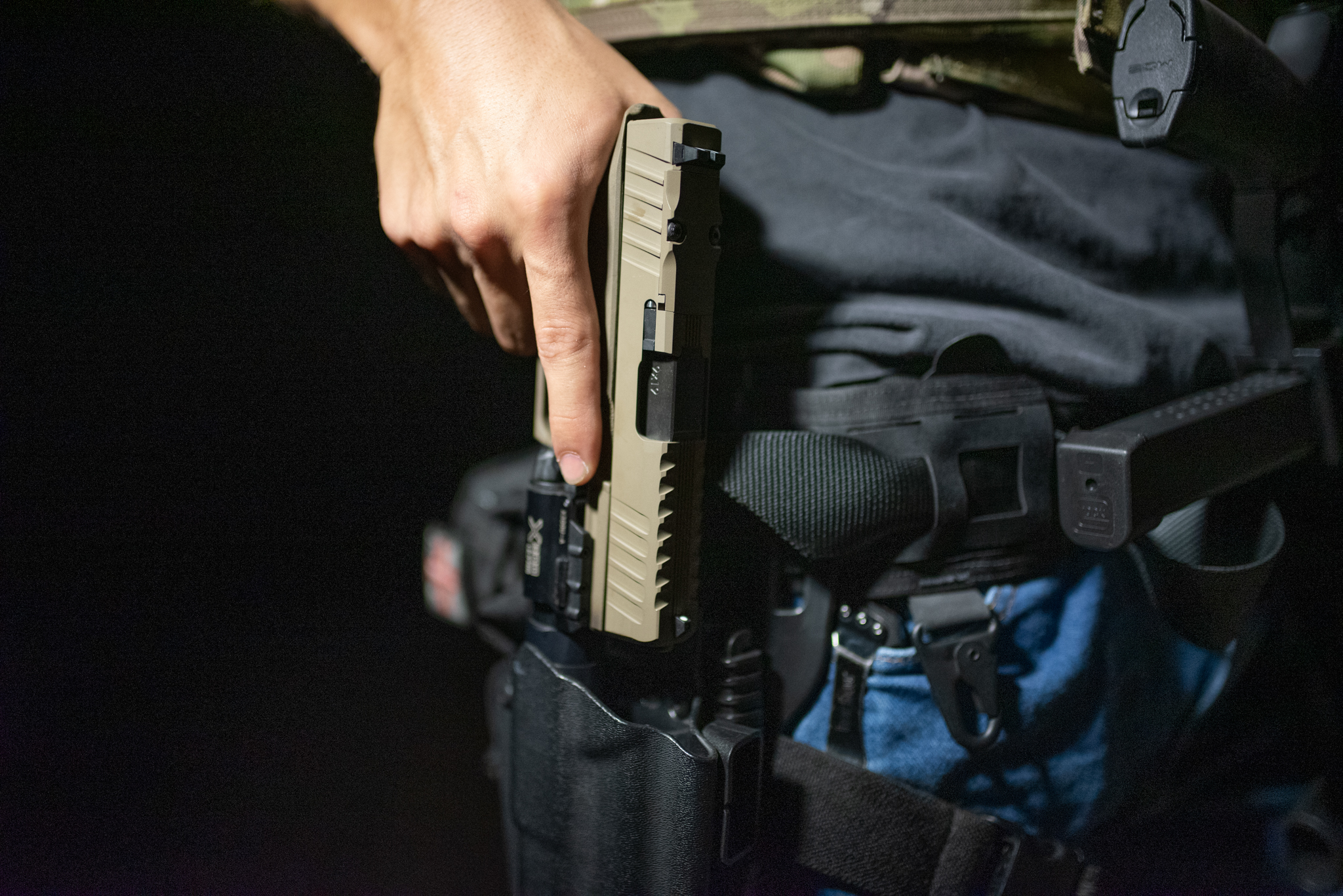 This week Ohio’s state legislature senate voted to pass through Senate Bill 215 which went through the House and the Senate all in the same day with an overwhelming majority favoring SB215. Specifically, the bill would make a concealed handgun license optional and it further clarifies when a person has to notify law enforcement that they are carrying a firearm. All that’s left is for Governor Mike DeWine to sign the bill which he likely will, given his party stance (Republican). Ohio is now slated to be the 22nd state to have enacted some form of permitless concealed carry legislation AKA “constitutional carry.”

Our prospect for the 23rd state to-be is Alabama. Another overwhelming vote favored their constitutional carry bill in their state House. Alabama senate also voted favorably for HB44. It was interesting/amusing though, this was the first time for us having heard an argument against a constitutional carry bill that stated to pass it would be “defunding the police.” In Alabama, the cost to apply for a CCW permit is $20 and permits remain valid for up to five years before needing renewal. 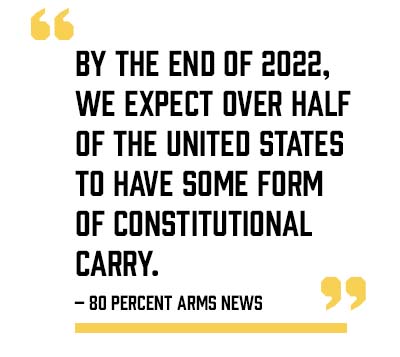 Granted, there was a fair argument that Alabama state legislators had not let newer gun control laws have a chance to succeed such as the lifetime pistol permit which was passed in April of 2021. The bill planned for a database to be made so that officers have a better idea of who is and isn’t allowed to carry a firearm when they come across people in their interactions. In theory, a useful tool. But whenever a database is involved, the pro-gun group becomes extremely adverse to those ideas in fear of these lists of armed citizens being abused for more nefarious purposes.

According to USCCA, 1.26 million permits have been issued in the state of Alabama which would mean sheriffs departments across the state would certainly be standing to lose some money. Isn’t it a problem for law enforcement to be relying on funding from a specific sect of the public that simply wishes to legally protect themselves? Take away that funding, and just like Lee County Sheriff Jones, the opponents will say that a constitutional carry bill only stands to increase crime and put officers’ lives at risk. Their wallets, surely. But an increase of crime? We’ve yet to see concrete data that substantiates that statement.

Biden Attacks 2A in State of the Union Address

Biden giving his speech at the 2022 State of the Union Address (Photo Source: Melina Mara for Associated Press)

If you didn’t get to see Biden in the latest State of the Union Address, here’s the TL;DR: Biden tried to make the 2nd Amendment solely about hunting and disregarded all other facets of gun ownership by saying, “You think the deer are wearing Kevlar vests?” On the topic of assault weapon bans and restricted magazine capacities Biden said, “these laws don’t infringe on the Second Amendment. They save lives.” On the topic of civil liability, Biden also said that “gun manufacturers are the only industry that can’t be sued.” Obviously, not true. 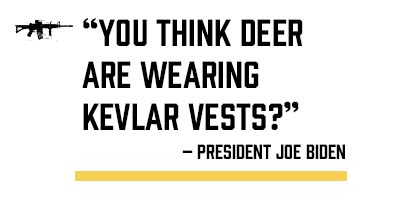 The thing is, firearm manufacturers’ advertisements are commercial speech that are protected by the First Amendment. And thus, we have the anti-gunners’ new strategy which is to legislate their disdain for the Second Amendment through litigation. We didn’t come up with this term though. “Gun control through litigation” was coined in the 1990s and early 2000s as several lawsuits were brought forward against gun manufacturers in the same way that the tobacco industry had previously been targeted.

Fast forward to this week, Biden is on one of the largest stages and platforms in the United States when it comes to public speeches (2022 State of the Union Address) and yet there’s no one to stop him from lying, meanwhile the politicians stand and profusely clap like puppets.It seems to us that there is an attack on not only the 2nd Amendment but also the 1st Amendment - so long as you’re speaking against gun control, you’re going to be silenced.

Just look at how the Sandy Hook settlement with Remington’s prior insurance carriers went down. The original case was Soto v. Bushmaster in which the plaintiffs asserted the claim that Bushmaster’s irresponsible and targeted marketing was to blame for the tragic mass shooting at Sandy Hook Elementary School. In reality, they would have had a very difficult time proving that their commercials inspired the shooter’s mother to buy the rifle and also inspired the shooter to commit his atrocious crimes… Remington’s insurance carriers simply weren’t interested in getting into a long and drawn out legal battle as we mentioned in last week’s newsletter.

A simple strategy, yet incredibly effective. If Biden successfully erodes the  Protection of Lawful Commerce in Arms Act (PLCAA), it would truly open up all firearm manufacturers to an onslaught of lawsuits which would hinder their ability to produce firearms and run a profitable business. Like any normal business, at some point, some companies may choose to cut their losses instead of continuing the fight to produce guns and related parts or accessories… and that’s exactly what Biden and his anti-gunner cronies want. Where do your elected officials stand on First and Second Amendment rights? If you don’t know, it’s time to do some Google searches and to make some phone calls to keep your representatives in check.