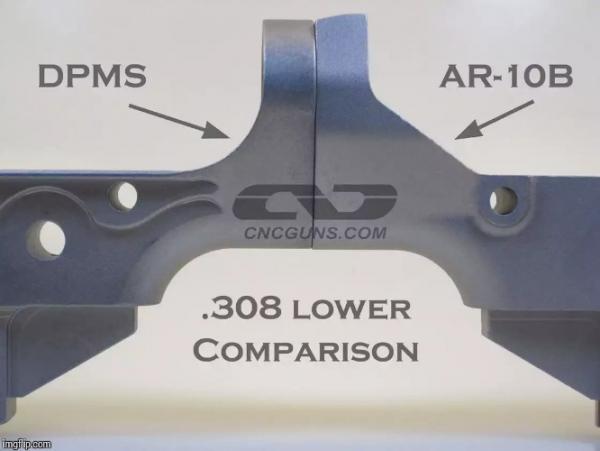 To figure out which AR-10 buffer weight and spring combination will work best in your AR10 or LR308 rifle, you’ll have to first understand some key differences between the AR-10 and LR 308 platforms. Essentially, here are the main takeaways that you should know:

Going forward we’ll continue to use the term ‘AR-10’ (in your head you can replace this term with ‘AR-308’ specifically because that’s what we sell) just think of “AR-10” as an overarching, caliber specific designation and not a reference to the original Armalite rifle. Technically, yes. All AR10 buffer springs and buffer weights are going to be able to fit in any AR-15 or LR-308 rifle. Whether they will make your rifle cycle consistently and perform reliably is a different story. That’s why there are specific buffer spring designs and various buffer weights which will work better or worse for certain length rifles. But yes, AR-15 and AR308 buffer springs specifically are the same length which makes them directly interchangeable.

You can actually run your AR10 rifle without any “AR10 buffer” and just use the spring. Only the first couple or few shots will work but the experience will not be pleasant. The violent action of the BCG going back and forth will be more intense and cause more wear and tear on your gun. There’s also no guarantee that the gun will cycle consistently.

The main difference in the AR buffer springs lies in the length. Going back to the actual AR-10 (Armalite design), the interchangeability is not reliant on whether you’re using an AR10 or AR308, it’s actually a buffer tube issue. AR15 style stocks are compatible with both AR15’s and AR10’s, hence the compatibility, because they use the same length buffer tubes. But if you use an A1/A2 style stock it will require a longer spring. 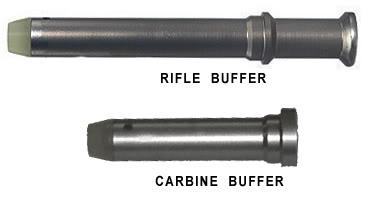 Why are buffer weights important? If you were to shoot with just a buffer spring and no buffer weight in a full auto/select fire AR-10 — you’d likely experience light strikes and because the timing of the bolt going back and forth would be off and not completely in sync with the hammer. 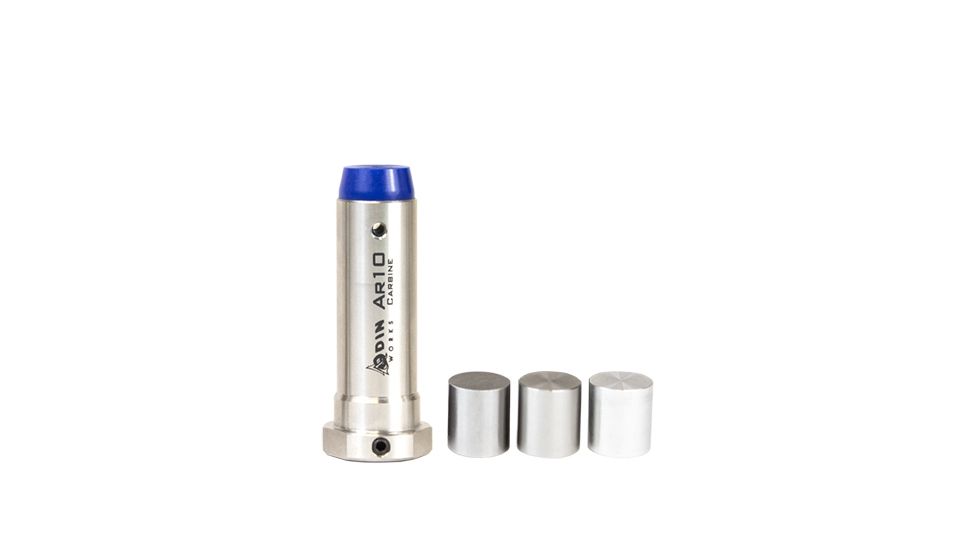 Having a buffer slows that cyclical action down to help you avoid light strikes, promote reliable cycling of rounds being fired, ejected and properly fed into the chamber. Once dialed in, you might surprise yourself with a softer and flatter shooting AR10 style rifle than you initially expected. You also don’t want too heavy of a buffer either otherwise you risk slowing down that bolt way too much which would cause malfunctions or failures. 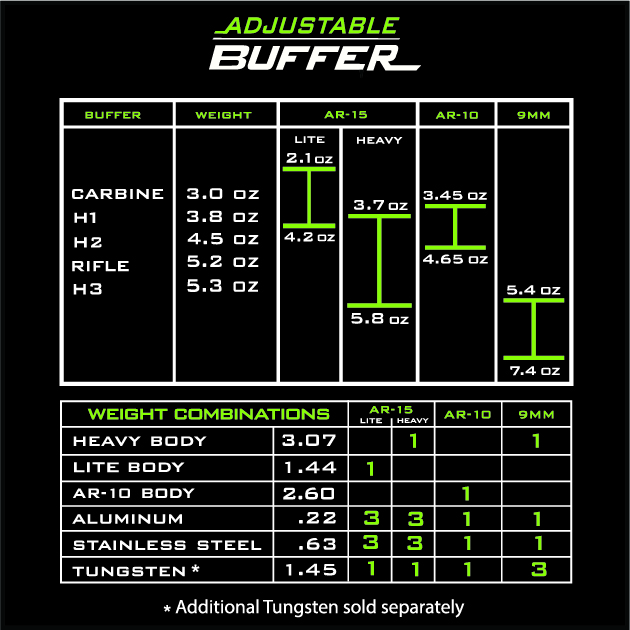 Generally speaking, don’t get hung on the rifle length buffers. AR10 carbine buffer weights will range anywhere between 3.8 to 5.4 oz for any AR10 style rifle. But that weight range can also depend on where you’re getting the AR 10 buffer from as well. The chart above is specifically for  Odin Works’ adjustable buffers which allow users to tune their buffer weight to get your AR308 rifle cycling just the way you want.

There’s no “one size fits all” answer when it comes to the topic of AR10 buffer weights and springs because there are just so many factors involved. Namely, the rifle length, ammunition load, buffer weight, buffer spring type, whether you’re shooting suppressed, etc. Some experimentation or trial and error is going to be inevitable but with this information you can make a better and more educated guess. Unlike the AR-15 buffer weights, we don’t have a chart for you based on length of rifle for AR-10s because there is less of a barrel length difference in AR10 style rifles. Most barrels are going to be around 18” to 20”.

But understanding the symptoms, like if you’re experiencing short stroking or a failure to feed or eject — will also help you know what you’re dealing with and advise your next move. Below, you’ll see a figure for how to diagnose the “health” of your rifle’s ejection angle based on which direction empty casings are flying after extraction. This concept applies to the AR-15 just the same as the AR-10 or AR-308. 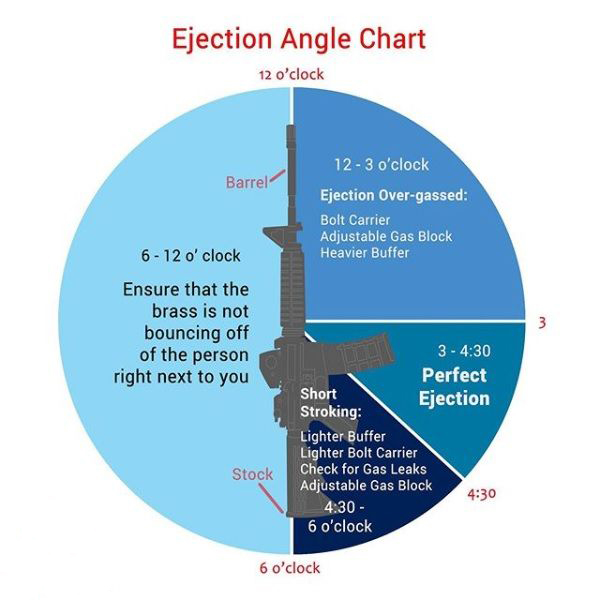 Don’t Forget About The Gas Block

A lot of people seem to forget how big of an impact the gas block can have on the shooting experience of any AR platform rifle. Most factory built guns are going to come with an overgassed gas block which will promote higher reliability between different parts and a wider variety of ammunition loads.

But when you’re building your own rifle from the ground up that tends to get in the way of properly tuning your rifle. That’s why it’s highly advantageous to have an adjustable gas block as it could mean the difference of your rifle cycling or not. Still, it’s best to think about the adjustable gas block as a fine tuning process whereas the majority of your guesswork is going to be within the buffer system.

We hope this information helps! If you have any questions, let us know through the comments below. Your opinion is valued and can direct us in what we write about. If you’re ready to take your newfound knowledge of Ar 10 buffers to the next level, get crackin’ on a new 80% AR-308 build! We’ve got all the parts you need from start to finish and if you have any questions or need some help throughout the build process reach out to our legendary CS team who will walk you through any road blocks you come into.