Skip to Main Content
The bolt carrier group or BCG is often described as the heart of the AR-15. It is responsible for performing essential functions including the strike of the firing pin, the ejection of spent casings, re-cocking of the hammer, and the chambering of new rounds. Bolt carrier groups are available in AR-15 and M16 style configurations. But why the difference, what is it, and what does it do?

The main difference between an AR-15 and an M16 lies in the lower receiver. M16 lower receivers have a third trigger pin hole for the auto sear, while AR-15 lower receivers do not. M16 lower receivers may also be milled to slightly different dimensions to accommodate the full auto fire control group. The ownership of an M16 is dependent on state laws due to the fact that they are fully automatic rather than semi-automatic. 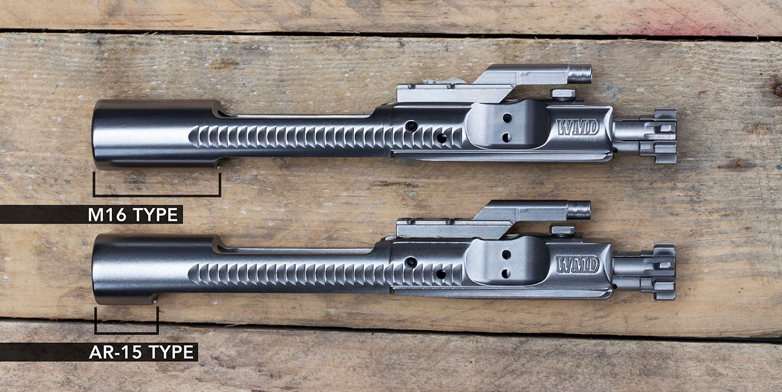 M16 style configurations have more material toward the rear of the carrier, called a full auto lug. This additional material is necessary for the full auto sear to function. Due to the extra material, M16 bolt carrier groups have an increased weight. AR-15 style configurations have a cutout on the bottom of the carrier. The cutout on AR-15 carriers is the absence of a full auto lug and will prevent the BCG from being capable of being used for full auto firing. AR-15 bolt carriers weigh less than M16 carriers because less material is present, though typically not enough to notice in practical use.

Which should I choose for my build?

When building an AR-15 from an  80% lower, you have the ability to choose exactly which parts you want to use, including the bolt carrier group. AR-15 BCGs and M16 BCGs are both compatible with the AR-15. Even though M16 BCGs are required for a fully automatic, they are not regulated by the ATF. Additionally, simply adding an M16 BCG to your AR-15 will not give it full auto capabilities. M16 bolt carrier groups are the industry standard for AR-15 builds. They are widely available and can be found throughout different price ranges. The real answer is that it doesn't much matter. Either will suit you fine, so long as they are from a reputable manufacturer.