Just because ammo prices have come down a little bit doesn’t mean everyone is able to afford current ammunition prices. Range entry costs money too… so, what do we do to keep this high maintenance skill alive and well? Dry fire. What is dry fire? Dry firing involves the practice of racking or charging a firearm so that the hammer or striker is ready to actuate. The trigger is then fully pressed while the chamber and magazine is empty.

This practice does not involve any live ammunition. Practicing dry fire drills is a fundamental exercise for gun owners in all walks of shooting life as it can train handgun draws or rifle presentation speeds, target acquisition, proper trigger control and reloads.

Is it bad to dry fire a gun?

For the most part, it is completely safe and okay to dry fire a gun. Specifically, centerfire rifles and handguns is completely safe however you’ll want to avoid dry firing guns chambered in rimfire cartridges too much as it can damage the firing pin, when empty it strikes hard metal, which will eventually dull the firing pin and cause light strikes or misfires. That being said, this issue could be avoided altogether if you simply use some snap caps which would protect the firing pin as you run your dry fire drills.

Is it bad to dry fire a Glock?

According to the manufacturer themselves, Glock, Inc. says that it is okay to dry fire a Glock pistol but they recommend using a snap cap or a dummy round if you plan on doing a lot of dry fire continuously for a long period of time. The point of a snap cap or a dummy round is to protect both the striker and the firing pin from the stress of repeated blows (which is not an issue with Glock pistols) but also ensures you won’t have an accidental desk pop or negligent discharge.

There are quite a few ways to go about dry fire training. These are the best training methods listed below from least to most expensive options: 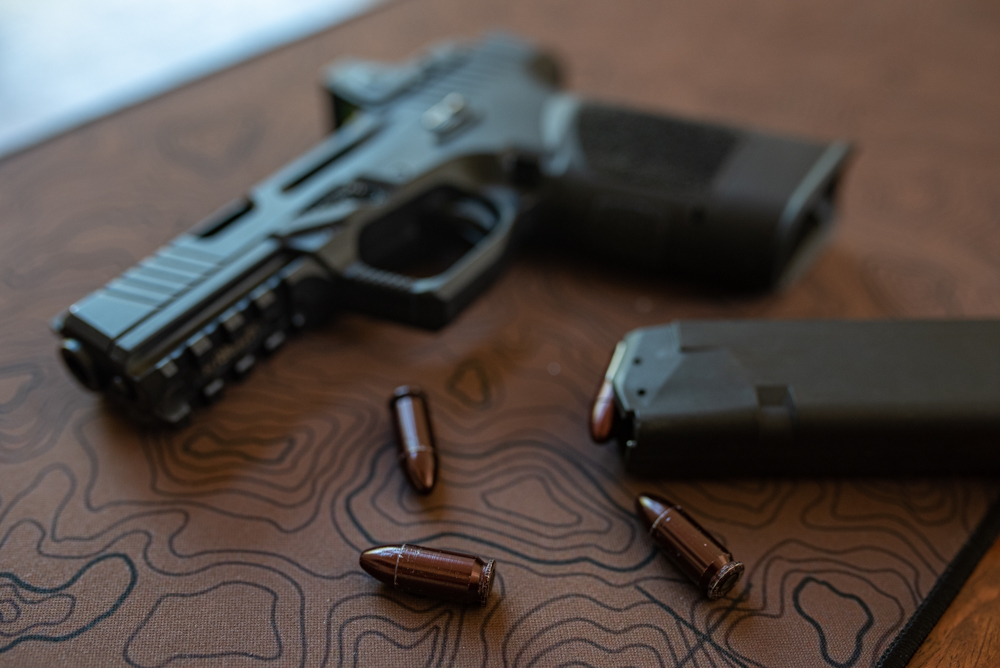 As we’ve mentioned already, snap caps are a great training and safety tool that can be used for dry fire training. Snap Caps themselves (made by A-Zoom) are a form of dummy rounds. Snap Caps have become the colloquial term for dummy rounds similar to how Velcro is a brand name, the generic item you’d be buying from off-brands would be called ‘hook and loop panels.’

Snap caps are useful not only for ensuring safe dry fire practice but also for simulating failures when doing live fire drills. You can mix in snap caps with live rounds to force you to practice how fast you can troubleshoot a failure. Do you tap, rack, shoot? Or do you drop the mag and eject the failure to insert a new mag? Snap caps can help you practice making those decisions quicker so it’s ingrained into your muscle memory and becomes second nature.

There are a number of laser training devices that aid in practicing dry fire — the best ones being dummy rounds that double as a laser and replica handguns that shoot out a red, blue or green laser per trigger pull. Lasers are great training tools because they allow you to quickly determine the quality of your trigger pulls. Say you’re pointing at a wall or a target and you pull the trigger. If you see a solid red dot appear and disappear, you’re doing alright. But if you pull the trigger and see a short red line then you know you’ve got some trigger discipline to work on. Seeing a line means that you’re pulling the gun in one direction or another which is not desirable and means you need more practice. 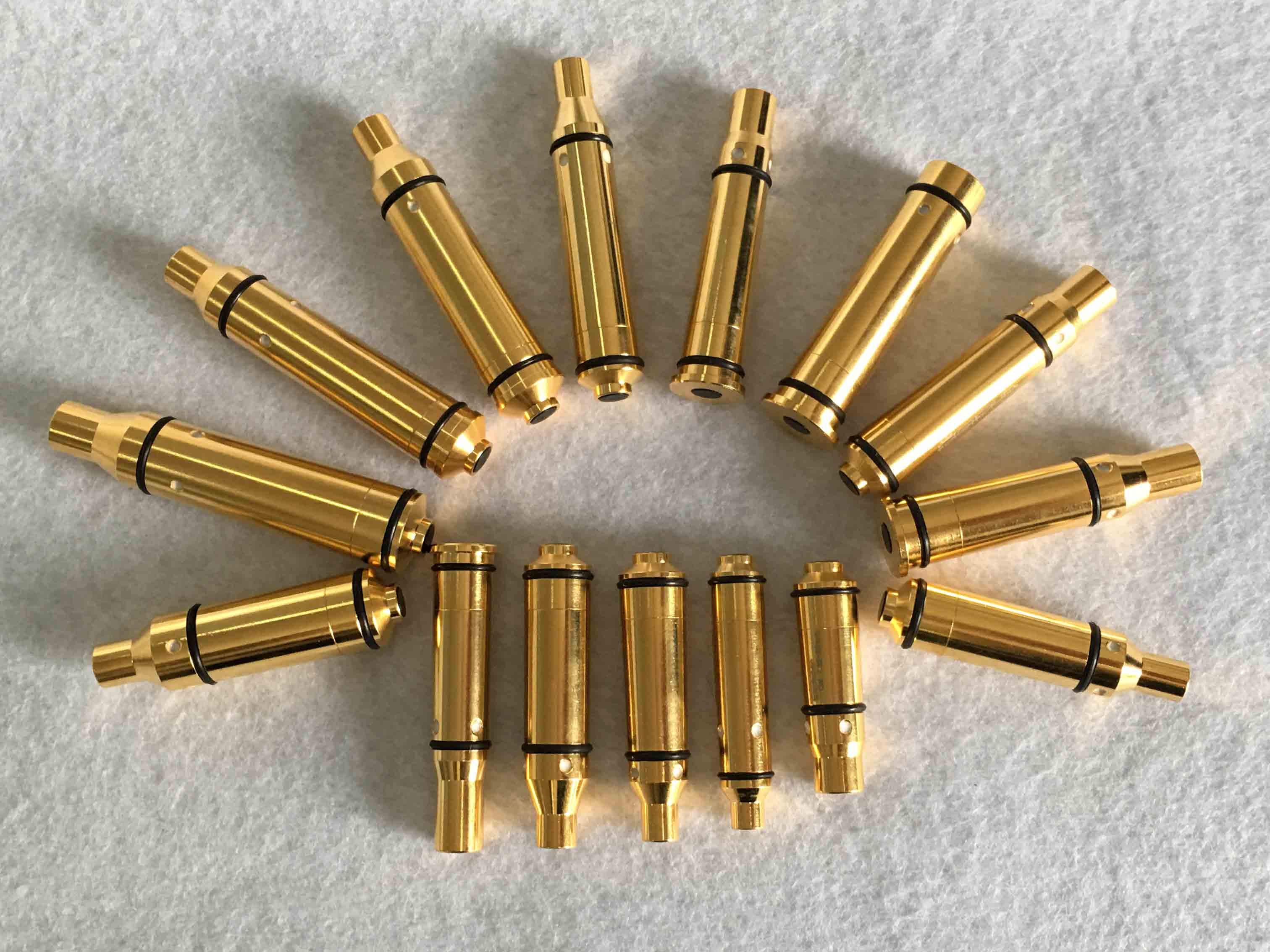 Think boresight laser. It’s the same concept, except you turn on the laser via strikes from the firing pin and this tool is not meant to help you sight in any optics. It used to be that only one major company made these but now they’re a dime a dozen and are made by more companies than I can count. Some like to incorporate laser trainers with small, at-home targets that use smartphone apps to practice drills and can tell you how your accuracy scores measure up.

Laser cartridges for handguns will work for either hammer or striker-fired pistols and are safe for firing pins to repeatedly strike because the actuator is a soft rubber button that activates the laser. They’re typically powered by smaller LR626 alkaline batteries. To use, simply insert the laser cartridge into the chamber while the slide is locked back. Most laser training cartridges will not eject when racking the slide as they’re designed to remain in the chamber, only to be taken out by hand. 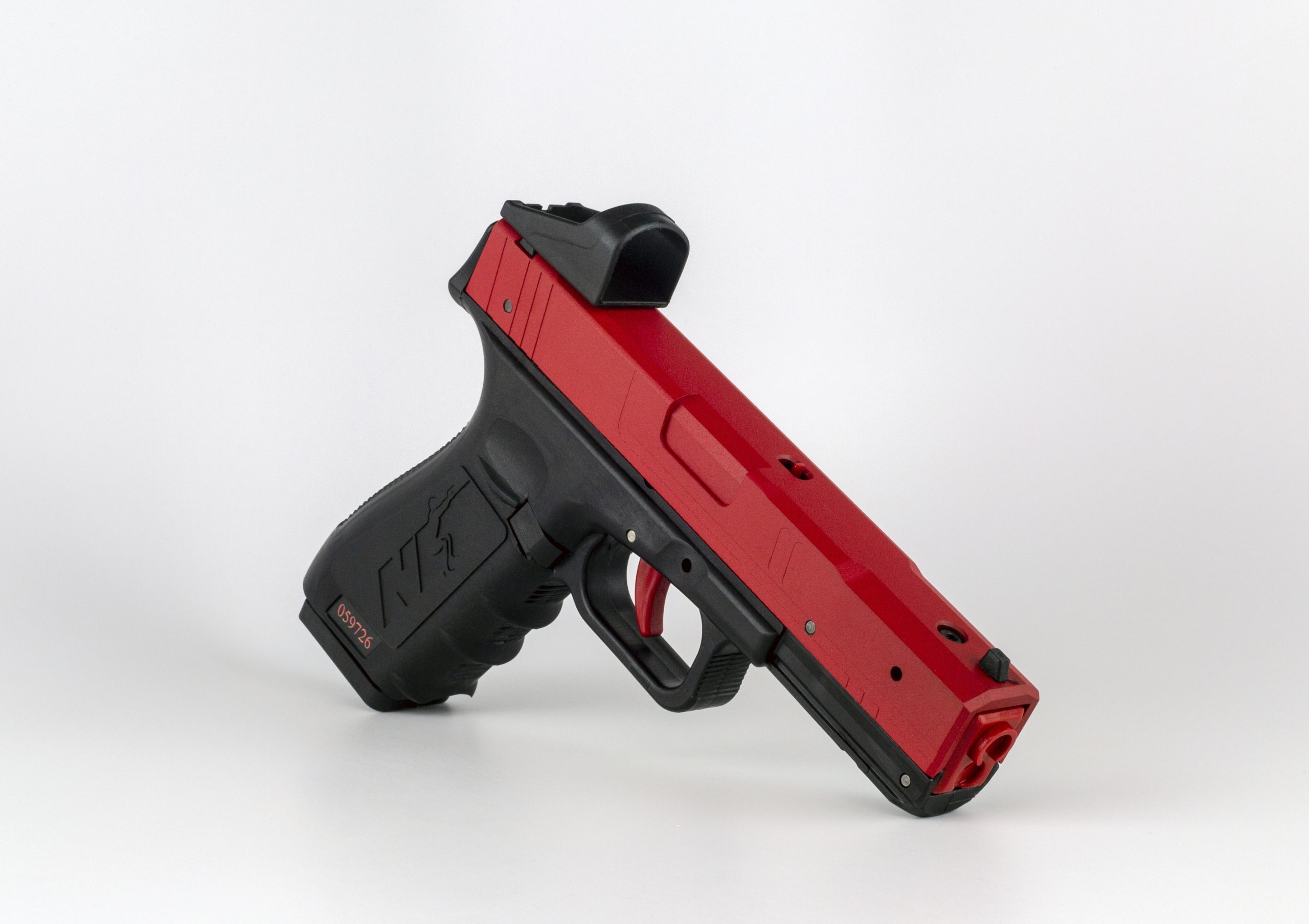 SIRT stands for “a shot indicating resetting trigger” which is a useful teaching and training tool in improving handgun manipulation, weapon familiarity and marksmanship. You’ve seen them in TV shows such as ABC’s Quantico where FBI recruits studying and training to become special agents first have to tout a SIRT pistol before they graduate and are issued a service weapon.

These training pistols replicate the real thing and were designed to feel and function in the same way as their real counterparts, except that they’re laser pointers and aren’t capable of shooting live ammo.

SIRT pistols are more than just a laser dry fire training system, they are a performance enhancer because of its main appeal which is the gun’s ability to reset the trigger without the need for racking the slide again to reset firing pin or hammer as you’d have to with a real gun. The draw to this product is that its price goes over $400 which basically costs as much as a real handgun; most people would rather spend that money on ammo or on buying another pistol so it’s kind of a tough sell.

For a slightly lower cost than the SIRT, you can get a CoolFire Trainer which goes for around $300. The Coolfire Trainer is another premium dry fire training system which allows you to use your actual firearm but replaces the barrel and guide rod as it’s powered by CO2 which gives your slide blowback function, similar to how some airsoft guns work. Within the recoil assembly there is even a laser that activates when pulling the trigger. With this product you get the best of both worlds between being able to use a laser and challenging yourself to have good trigger control while experiencing realistic recoil from the slide going back and forth. 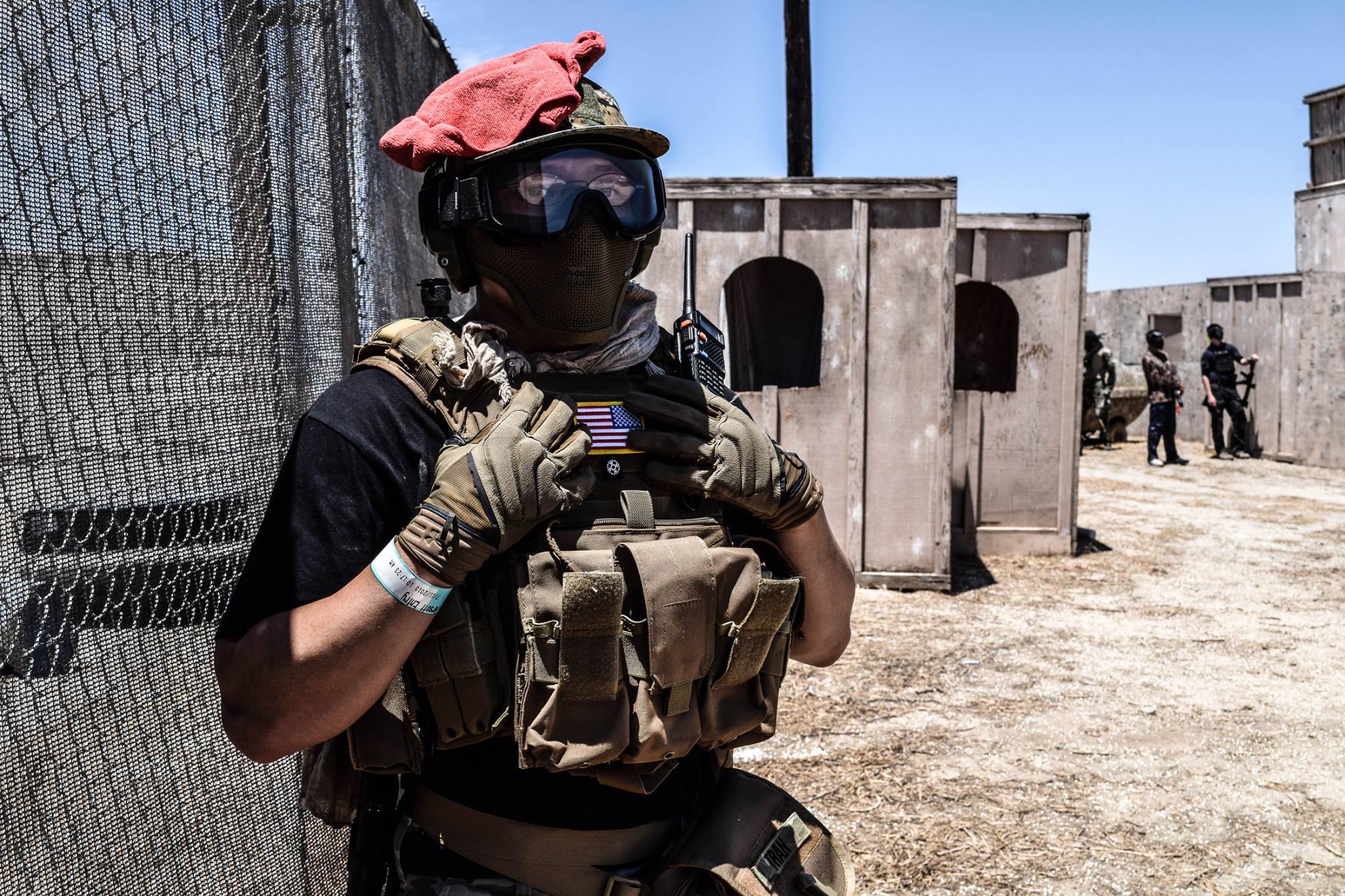 Airsoft is often overlooked and easily made fun of by those of us who more often sling lead down range instead of plastic bb’s. Some of the topics surrounding airsoft certainly still are funny like the memes and funny online videos of players’ blooper reels. But to be honest if you’re still in the camp that ridicules airsoft, you’re kind of behind the times. Even a decade ago, the airsoft industry had made huge strides in creating hyper-realistic guns that are not only fun to plink with but great for training for the real thing.

KWA and PTS Syndicate are two brands well known for their high quality products that make viable training tools for law enforcement and the military. Even if you’re not planning on playing airsoft at a local field, it could be a significantly cheaper option to use around at home or in the backyard. KWA makes some of the best blowback airsoft guns that are powered not only by green gas or CO2 but also by battery; they like to make the comparison of how 1 Simunition round costs the equivalent to about 700 bb’s. Well with realistic airsoft magazines that only hold 30 bb’s or even less, can you imagine how many drills you could have run? Airsoft also hurts significantly less than the damage simunition would do to you, but it still hits hard enough and gets the point across.

Is airsoft good for training?

Yes, very much so. The gear and accessories used by gun owners and airsofters alike are one and the same so it's an easy transition to make either way. From pick-up games in industrial buildings with shoothouses, to outdoor fields designed to be like maps from classic first person shooter video games, to weekend long Milsims the range of opportunities to “play” while getting valuable reps in is very wide. Put it this way, how long do you spend on average each range trip? Couple hours, if that? How much money did you spend on range fees and ammo? Were you sweating? Were shooting and moving at all? Or were you just standing still and shooting at a static target? All we’re saying is that for significantly less money and at times a lot more fun, you can have fun and play a low-stakes, adrenaline fueled game while subconsciously drilling and learning some of the basics in how to move and shoot.

It sure can! Most fields or parks that host airsoft games will regulate the speed of bb's being shot out of airsoft guns to be 370 to 400 feet per second if you're outdoors and 350 fps or less if you are playing indoors. If you wearing a thicker jacket or a plate carrier, that bb's going to bounce right off of you. But if you're just wearing a t-shirt, you can definitely expect to get some welts, bruises and even light scarring. The closer you are, the more you're going to feel it. That's why airsoft businesses and games will almost always require full face protection and ear protection as some people will even use stun grenades (mostly just sound and bb's, no flash powder).

At the minimum, you should own snap caps in whatever caliber guns you own and shoot. Laser dry fire training is no doubt useful, however probably more helpful for beginners learning the basics than those looking to improve their mechanics and speed. The best dry fire training system, in our opinion, is actually going to be a gas blowback airsoft gun. With how volatile the market has been the past couple years regarding the supply of ammunition and firearms, airsofting has also recently garnered the attention of several gun influencers in the online community.

Granted, there’s nothing that will completely replicate live fire drills with your gun, but if you want to see how you perform under duress while your heart is beating hard and fast; get really familiar with your gear and equipment, and burn techniques such as room clearing, build teamwork skills, learn how to communicate with other people or even just moving around in general with a gun, then you’re not going to find a cheaper and more fun alternative than airsofting.