Legal Disclaimer: The information in this blog is not legal advice. We are not lawyers. While we endeavor to keep all our blogs updated with the most accurate information, gun laws are ever changing and they can change quickly with little to complex differences in new legislation. Therefore, while we try our best to provide complete information, we acknowledge that everything you’re reading below may change (or already has changed).

Do not rely solely on the information provided by us or on this website for your purchase decisions. To ensure that you, the buyer, are acting in accordance with all federal, state laws and local ordinances, please be sure to do your own research and consult an attorney if necessary.


In early July 2022, three plaintiffs banded together to sue the ATF over their rule ( 2021R-05F) which plans on changing several legal definitions - namely, on unfinished frames and receivers. The three plaintiffs include Gun Owners of America, Bridge City Ordnance and North Dakota resident Elizer Jimenez.

Under pressure from promises that were made on the presidential election’s campaign trail, since being inaugurated, Biden has placed a lot of focus and efforts on addressing the issue of gun violence in America, illegal firearms trafficking and the media’s favorite buzz word; “ghost guns.” His push to further regulate privately made firearms is supposed to go into effect on August 24, 2022. That’s less than a month and a half away.

Should the ATF’s final rule go into effect unchallenged, companies like ours will not be able to continue manufacturing 80% products. When the rule was released, we harbored concern that the rule made the business untenable, but did so in a way that was confusing and appeared contradictory. Our concern grew as further analysis was conducted that demonstrated the final rule’s intention was to deliberately put companies like ours out of business.

Come August 24th when the rule goes into effect, builders would be unable to legally obtain all the parts needed to completely build out their own firearms. Since 2021, 80 percent lower receivers and pistol frames could not be sold with their respective jigs together in a bundle or a package. Going forward from the new rule — if a buyer were to purchase these items separately themselves, the ATF would consider it a crime of 1structuring.

How the ATF tricked us into complacency

For this reason and many more, GOA has filed this lawsuit to call into question the constitutionality of this new rule and why it is a blatant and fundamental violation of the Second Amendment. The goal - to receive an injunction from the courts on ATF 2021R-05F.

As an 80 percent products manufacturer and company, we greatly appreciate this lawsuit as it illuminates several misconceptions about the final ruling which was made by design. The ATF’s intention was clear: placate the average gun owner. From responses we’ve received from customers when this first came out, and other activity online, we think the ATF succeeded.

We’ve seen so many people online arguing with each other over what parts will be considered firearms or not, whether or not some parts will require serialization or not and if it’s a big deal at all — this has all been completely besides the point. The argument has been reframed from the fundamental issues. (You can see some of the comments and questions we've received throughout this blog.)

Before, it was left up to the states to choose if they wanted to regulate or restrict these products. With the new rule looming over us, it stands to reason that everyone should be concerned about this as it seems that many have missed the fact the ATF plan on revoking ALL prior determination letters that were approved for 80 percent lower receiver and pistol frame products. Unchallenged, ATF 2021R-05F will render the 80 percent industry completely unviable and pave the way for additional rulings (such as 2021R-08) to be treated as federal law.

See the complete breakdown of the GOA lawsuit below.

ATF is acting Arbitrarily and Capriciously

Historically, the ATF had not chosen to provide an official regulatory definition of “frame or receiver” that was workable. Their solution was to make classifications whimsically on a case by case basis. This can be seen in the example provided below from GOA’s lawsuit documents. 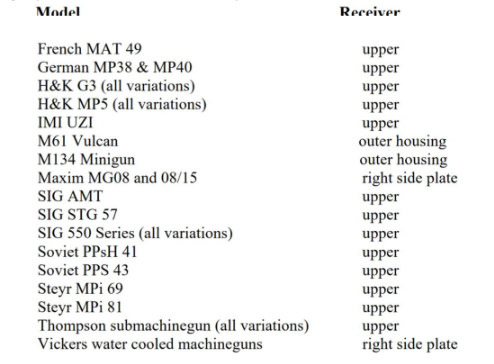 Sections 56 to 61 on pages 19 to 20 of the GOA lawsuit present a significant contradiction from the ATF which shows that the AR-15 doesn’t even meet the ATF’s regulatory definition from the Gun Control Act of 1968 on what is actually the lower receiver or upper assembly. So to say that the update in definition is due to change in firearms technology is a complete lie intended to act as a red herring. Throwing consistency to the wind, the ATF now wants to define both the upper and lower receivers as a “firearm” in the new rule.

The problem with these new regulatory definitions 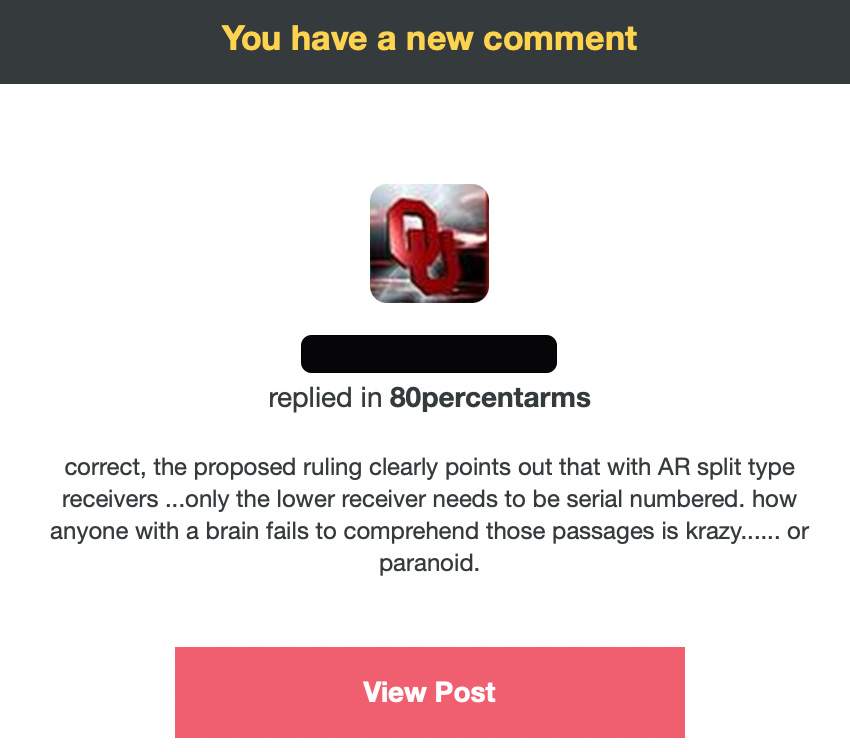 To review, GOA takes issue with the ATF feigning ignorance with what modern firearm designs are like (stated in the NPRM, the proposed version of 2021R-05F) - citing that as one of the reasons for needing new regulatory definitions. The definitions we are all used to in our current status quo came from 1968. But as early as 1963, the ATF actually reviewed the Colt AR-15 which of course had a split/multi-piece receiver design as a firearm. Even in 1961, the ATF reviewed the FN Browning Light Rifle (7.62) which also had a split upper and receiver design. This makes it implausible for the ATF to claim that they were not aware that this was a popular firearm design widely in public circulation at the time.

In the NPRM, the verbiage provided to us at the time would have regulated most firearm parts into be considered as “firearms.” Yet, within the very same document, the NPRM also conceded that “Congress recognized that regulation of all firearm parts was impractical,” which is how the GCA specifically replaced the language of “any part or parts” with “the frame or receiver.”

Essentially, the final rule creates this issue where the definition of “frame or receiver” is in direct conflict with the ruling’s promise that each firearm can only have one “frame or receiver” - which is false. The ruling also needs to differentiate its legal definition from the need to serialize certain firearm parts.

“If there is no prior ATF classification of a given firearm, then ‘any such [serialized] part’ should be ‘presumed’ to be a ‘frame or receiver.’” If you buy an OEM Glock, you’ll notice that the slide and barrel are all serialized - not just the frame. Does that make Glock slides and barrels to be legally considered as firearms now too?

Inconsistent logic with the ATF making them standardless 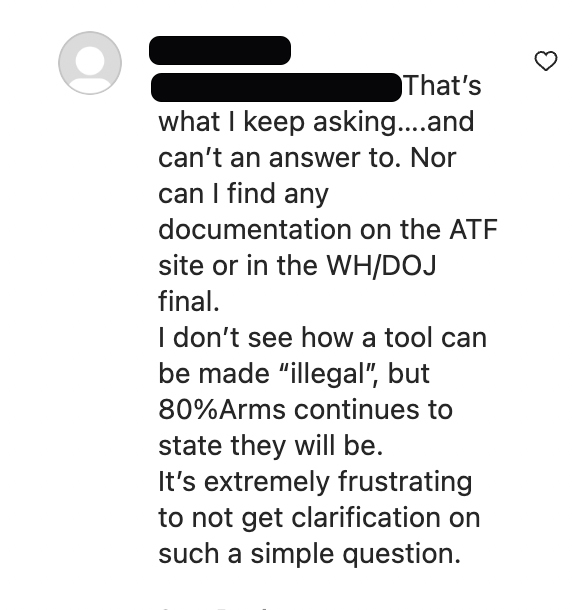 With the adoption of a vague, standardless definition of the statutory term “readily” as it applies to 80% frames and receivers; including when they’re being sold as “weapon parts kits…” federal courts have struggled to interpret the meaning of this word from as early as 1978. Some judges have said that as little as 12 minutes is all it would take to be considered as “readily converted” while other judges have said “an 8-hour working day in a properly equipped machine shop.”

By coming out with these “rules and policies” on orders from the Biden Administration, it’s as if the ATF is creating federal laws all on their own without going through the proper process in Congress. How can we, the gun industry, be expected to accept this — when the ATF themselves more often than not don’t even know what they’re looking at while having trouble legally defining the very thing they seek to restrict and regulate (80% pistol frames, upper and lower receivers)?

1What’s more, the ATF’s wanton desire to criminalize millions of common, law abiding American gun owners is incredibly disturbing. See pages 62-63 of the GOA lawsuit which explain how the ATF plans on going after consumers who buy certain firearm parts separately to put a build together - this would be considered structuring.

Structuring is a term that comes from the finance world where financial crimes and fraud are unfortunately common, especially within the money service business space. For example, say you need to deposit $100,000 into your US bank account from a foreign account. Any transaction $10k and above will be reported and required to be taxed, which is normal. If you purposefully make $9k transactions instead with the intent to evade the reporting requirements and taxes, this would be considered as structuring and is illegal to combat anti-money laundering schemes and other illegal activity.

Gun owners and builders could face similar if not the same scrutiny with the way the verbiage stands in the final rule and would be subject to a new federal crime if a serial number is not present on a privately made firearm or if it is removed, altered or obliterated for any reason. In addition, companies who sell jigs to individuals who previously purchased lowers could have structuring charges brought against them even if it wasn’t an intentional collusion between the businesses to sell to the same person. The industry simply cannot survive this uncertainty. That’s been the goal since the beginning of the rule-making process.

A quick way to understand the GOA lawsuit and what is being demanded can be found at the end of the document under the section Causes of Action and Demand for Relief.

6. Violation of Fifth Amendment - Due Process (Voiding 2021R-05F for Vagueness)

7. Asserting the Right to Keep and Bear Arms - It’s the Second Amendment, need we say more?

9. Rebuking a National Gun Registry - Obviously, we are against this. 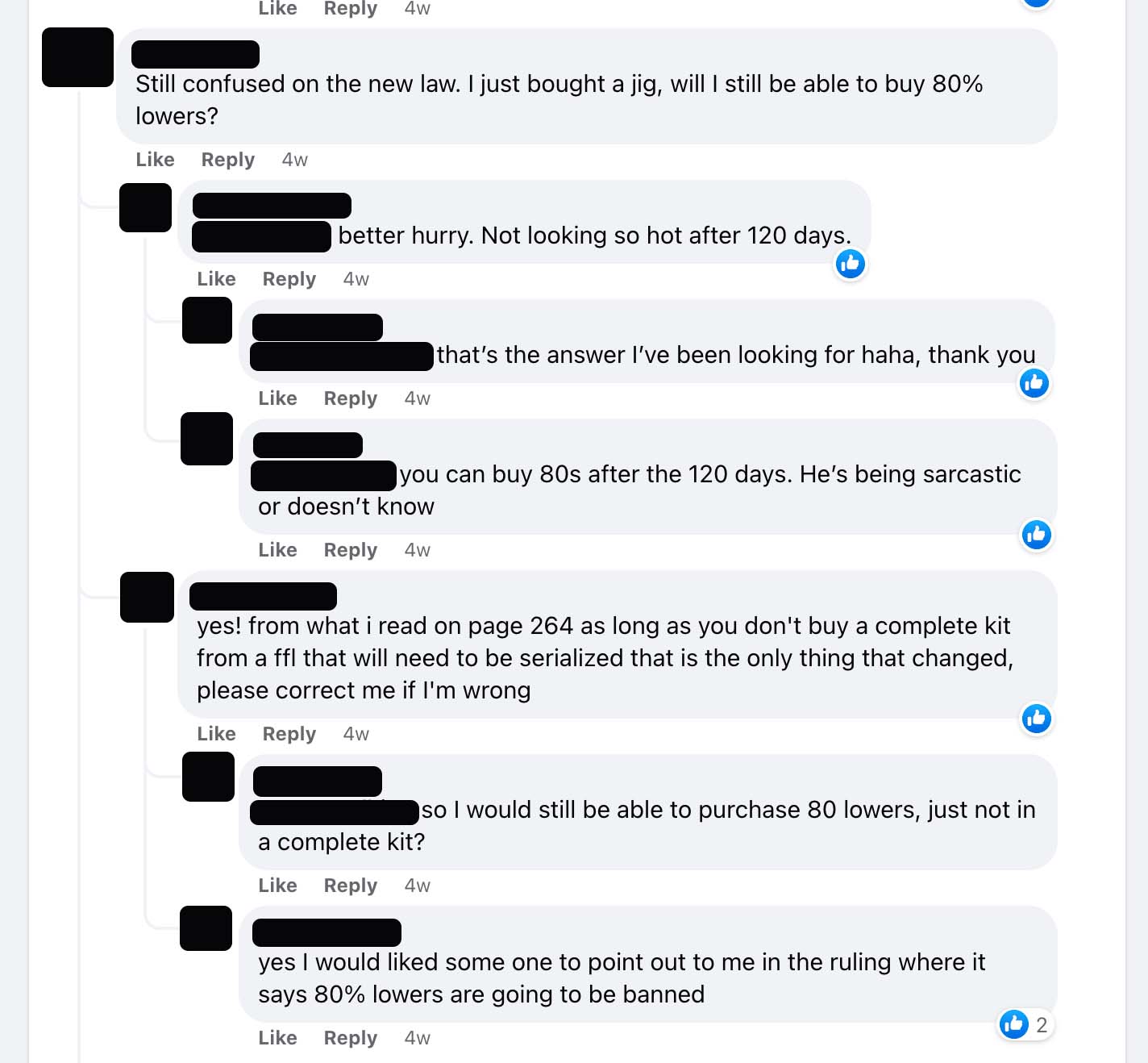 Do not let yourself get distracted by the final ruling’s minutiae. It was meant to misdirect, confuse and give the ATF ultimate authority over the American people’s rights to buy and build their own firearms. Support GOA today, in their fight for our livelihoods and rights as we wait and hope for justice to be done on our behalf in the courts. Until then, keep buying and building out more lowers!