What up fellow nerds, today we’re going to show you how to build a functional AR15 pistol chambered in .22LR that is inspired by Han Solo’s DL-44 blaster that was made most famous by the original Star Wars saga. It’s a more modern take on the weapon as we took some creative liberty to piece this build together. In this guide we’ll show you all the parts you need to build your very own Star Wars blaster.

But before you set us on fire, we’re fully aware of how deep the fandom gets when it comes to the DL-44 so this is obviously not the closest functional replica that’s ever been created by far, but at a glance it’s a pretty fun project!

Part of the reason why the DL-44 is shrouded in controversy and lore is because the representations have varied several times not only from scene to scene in the movies but even in the promotional marketing materials where photos were taken before the movies were filmed. We’re definitely not experts on this subject matter so if you’re just entering the world of replica firearms and clone builds, for the DL-44 in particular, these links are going to be your best resources for a deep dive:

What parts you need to make a functional DL-44

In the photo above, we’ve broken down the major parts and components needed to achieve the same or similar build as us for this AR15 Han Solo Pistol. Thanks to Canto Arms we were able to acquire some missing essential parts that we didn’t have conveniently lying around the shop. Here is the complete list of products we used for this .22LR pistol build: 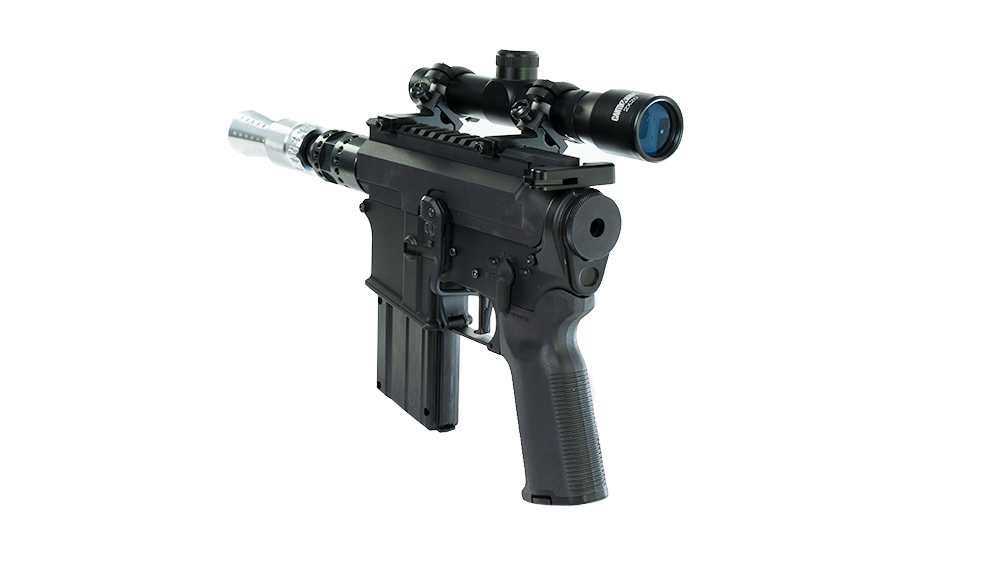 So the upper receiver for this pistol is quite fun because we’re using the CMMG .22LR Conversion Kit which means we don’t need a buffer tube as the bolt carrier group from CMMG has a self-contained buffer spring that’s built into it. As you can see in the photo above, we’ve used an end cap to seal where the buffer tube would normally screw into the upper receiver. You can buy this end cap from Canto Arms or one made by CMMG from Omaha Outdoors. For our build we used a stripped AR15 upper receiver that was just lying around without the dust cover.

We thought it looked cooler that way — although, you could potentially use one of our AR9 upper receivers as well since the ejected .22 casings don’t need that large of a port to properly eject. This would help make any functional replicas look more accurate as well if you care about that.

This lower receiver started off as an 80% forged AR15 lower that we occasionally sell. It actually came from another build we had built for marketing purposes which is why the BAD lever is still on it, we decided to leave it on for the next functional Star Wars inspired blaster we might try putting together. Perhaps, an E-11? Other than the 3.5 LB flat drop in trigger from CMC, the lower parts kit was a mil-spec kit from CMMG. With the mil-spec safety lever, it also adds to a closer Han Solo look.

We also used the anti-walking pins from CMC just to have that peace of mind and never have to worry about the pins moving out of place. Those little screws also add a nice touch to the overall look. Since we wanted a more modern approach we grabbed our favorite pistol grip from Magpul, which is the K2+, a rubberized and ergonomic grip great for shorter AR pistol builds. The original DL-44 was made based off of a wartime commercial model of the C96 Mauser but since we’re using an AR15 80 lower receiver, we’re starting off on an incorrect foot in the first place. 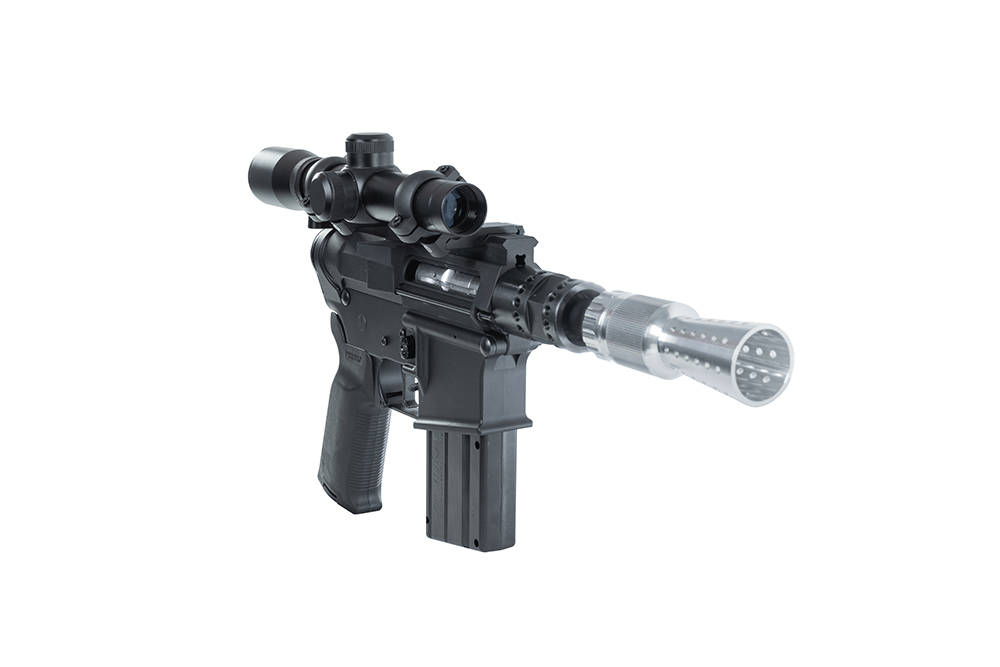 To be honest, we were in a bit of a hurry to put this build together in time for this week so when we saw that Canto Arms had a pretty close looking pistol scope compared to the one used in the movies, we jumped on it immediately given its affordable pricing. This here is the 2x20 Blasterscope™ with a duplex reticle and in case you already have your own scope rings, the tube diameter is 1”. If you don’t, you can conveniently pick up some canted picatinny scope rings from Canto Arms as well. Fun fact: the eye relief on this optic feels like it’s two and a half feet. If you want the prop-correct model you’d have to pay more than a pretty penny for something like the Hensoldt Wetzler 3x telescopic sight.

Our barrel in this DL-44 is a 4.75” from KAK chambered for 5.56 NATO but please note that you don’t have to use the same barrel as us, this just happened to work out for us. In a more “replica correct” build, you might want to use a different barrel nut so it doesn’t cover up the barrel so much but since our lower receiver didn’t have any fancy, ornate features, this barrel nut actually kind of looked like a decent replacement as a heat sink (when in reality this is just where the handguard would mount onto).

The original DL-44 used this flash suppressor design which came from a World War II German aircraft machine gun, the MG-81. This replica design was also made by Canto Arms and it actually looks pretty great! If you really want to nitpick all it’s missing is a small screw which was meant to pin the flash suppressor to the barrel but when you’re only shooting .22LR that doesn’t really matter a whole lot.


Speaking of ammo, if you want a more replica-friendly looking magazine you'll have to use something like the Black Machine X Form 10 rounder but if you purchase the CMMG .22LR Conversion Kit it comes with three great magazines that work just as well and can hold much more capacity for three times the fun (your state's magazine capacity restrictions permitting).

Build Your Own Blaster Today With 80 Percent Arms!

Well that’s it folks, hope you enjoyed this how-to guide here and if you do end up building some Star Wars inspired blasters, share ‘em with us, let us know about them! If you enjoyed this content, sign up for our newsletter to get more of it and stay tuned for our update review for when we actually shoot our DL-44!

May the 2nd Amendment be with you, always.