As gun owners, our guns are prized (and valuable) possessions. We've spent a lot of time and work building up our collection, and we want to protect it from everything we can. From protecting your gun from rust, to stopping thieves, we want to take a look at all the best options for keeping your guns safe, whether you're at home or on the road.

How to store guns safely in your home

My dad used to say, "If you ain't shootin' 'em, you're lookin' at 'em", anytime I wanted to buy a composite stocked duck gun, because they just aren't as pretty as a wood-stocked gun. And while that may be true when you live out in the country and don't have to worry about hanging a gun on your wall (or in a truck, more on that later), it isn't how it works in most areas of the country. For many reasons, it's best to store your guns in a safe, and most of the time, that's where they'll be.

We're going to keep this section short, because there isn't a whole lot to say. We don't recommend 'gun cabinets' because they offer little to no protection and are not the greatest method to store guns and ammo. Here's why —Whether it's an ornate wood and glass cabinet to display your guns, or a flimsy metal locker, gun cabinets are about as hard to get into as a childproof cabinet for a thief, and they advertise exactly where the guns are. Firearms would be better off stashed in the attic where at least they'd be hidden and for the most part, out of reach and inaccessible.

There are far better options for how to store guns. That being said, if you cannot afford anything better a gun cabinet is absolutely better than nothing. Gun cabinets also make great storage spots for ammunition, cleaning kits, and other general gun-related items or gear you may have lying around that could help you declutter. But if you want to know how to store guns safely in your home take a look below. 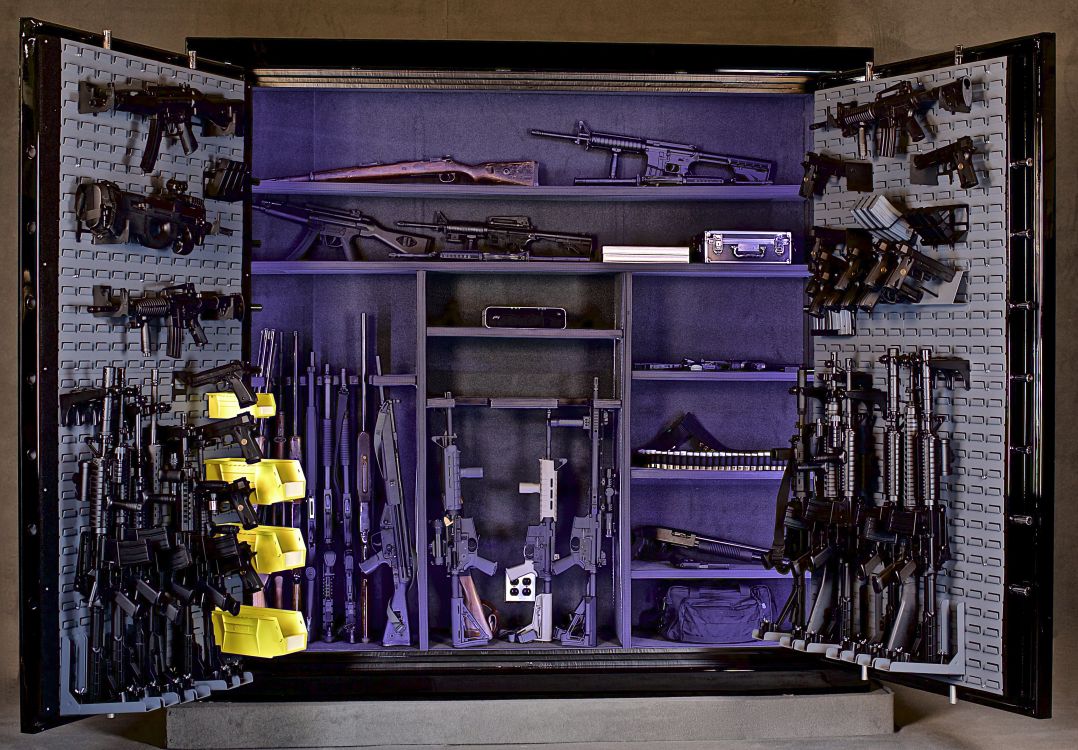 I think we all aspire to fill a safe this large...

Gun safes are a must for every gun-owner. In fact, in some states such as California, it's actually a legal requirement. One of the largest misconceptions about gun safes is that they are only to protect from thieves, and that you may not need one because you live in a crime-free area. At one point, I thought the same. The truth, is that a safe has more functions than simply keeping your guns safe from more than just a common crook. While removing the opportunity for curious eyes and hands to mess with your belongings you also reduce the risk and liability of someone hurting themselves with your guns or gear. Have you ever thought about what would happen if your house caught fire? Most respectable safes are rated to protect its contents for at least 30 minutes; did you know that the average house-fire lasts only about 20 minutes?

What about the other side of the coin? Excessive moisture is public enemy #1 when it comes to firearms. Anyone who lives near the coastal border or gulf can tell you careful they need to be of humidity will do to firearms. A safe allows you to have a more controlled environment, allowing you to better adjust temperature and humidity to keep your precious guns cool and dry.

Finding it hard to spend the money on a serious safe? Ultimately, spending $700-$1000 on a safe that will last a lifetime is one of the soundest investments you can make. If it protects even one gun from theft or ruin, it's already paid for itself.

How To Store Guns While On The Road

Where are most guns stolen? Out of vehicles. It happens in your neighborhood, when you're parked downtown, it can even happen at the range. If your guns are stolen, you have less than a 20% chance of getting them back according to the Bureau of Justice Statistics. And no matter how vigilant and careful you are, at some point, your guns are going to be left alone in the car at some point. So where should you store a firearm in your car? 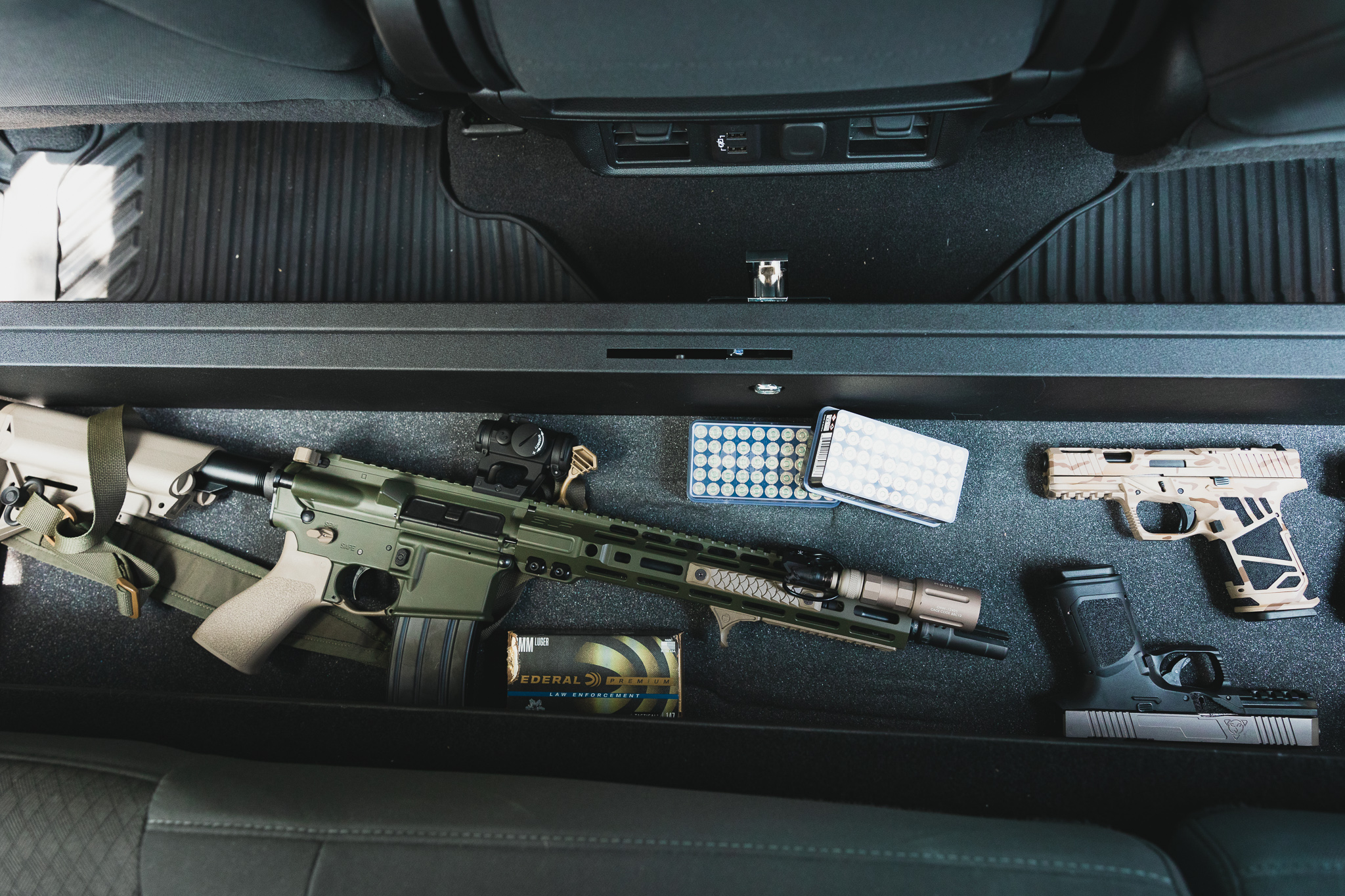 A slide-out safe for your truck by Boss Strong Box, featuring a few 80% builds

There's only one name in the truck-safe game, and that's  Strong Box. If you're wondering how to store a rifle in your truck you can stop right here. Designed to be discreet, yet extremely secure, the Strong Box gives you ample storage to feel confident about leaving a long gun in your truck unattended. In the above photo, you can see a rifle and two handguns, but what you can't see is another two handguns and a medical kit all fitting under the seat of an F150. For more practically you could comfortably store a rifle, body armor, gun belt, medical, and the rest of your kit which can ride with you wherever you need to go.

The only downside here is that you might find yourself at the range more than your wallet would like (now that you'll have a daily excuse to be traveling with firearms, ammo and gear in the backseat). For larger Strong Box safes, they fit perfectly under the rear seat, so an average thief won't even realize that there is anything potentially valuable in the car. Though, if they do, the Boss Strong Box is a tough enough  truck safe that they won't be able to get in without some heavy duty tools, which quite frankly, most car thieves don't carry. Another great reason (possibly the best) for getting a truck safe: Who doesn't want to brag to their buddies about their truck having its own gun safe? 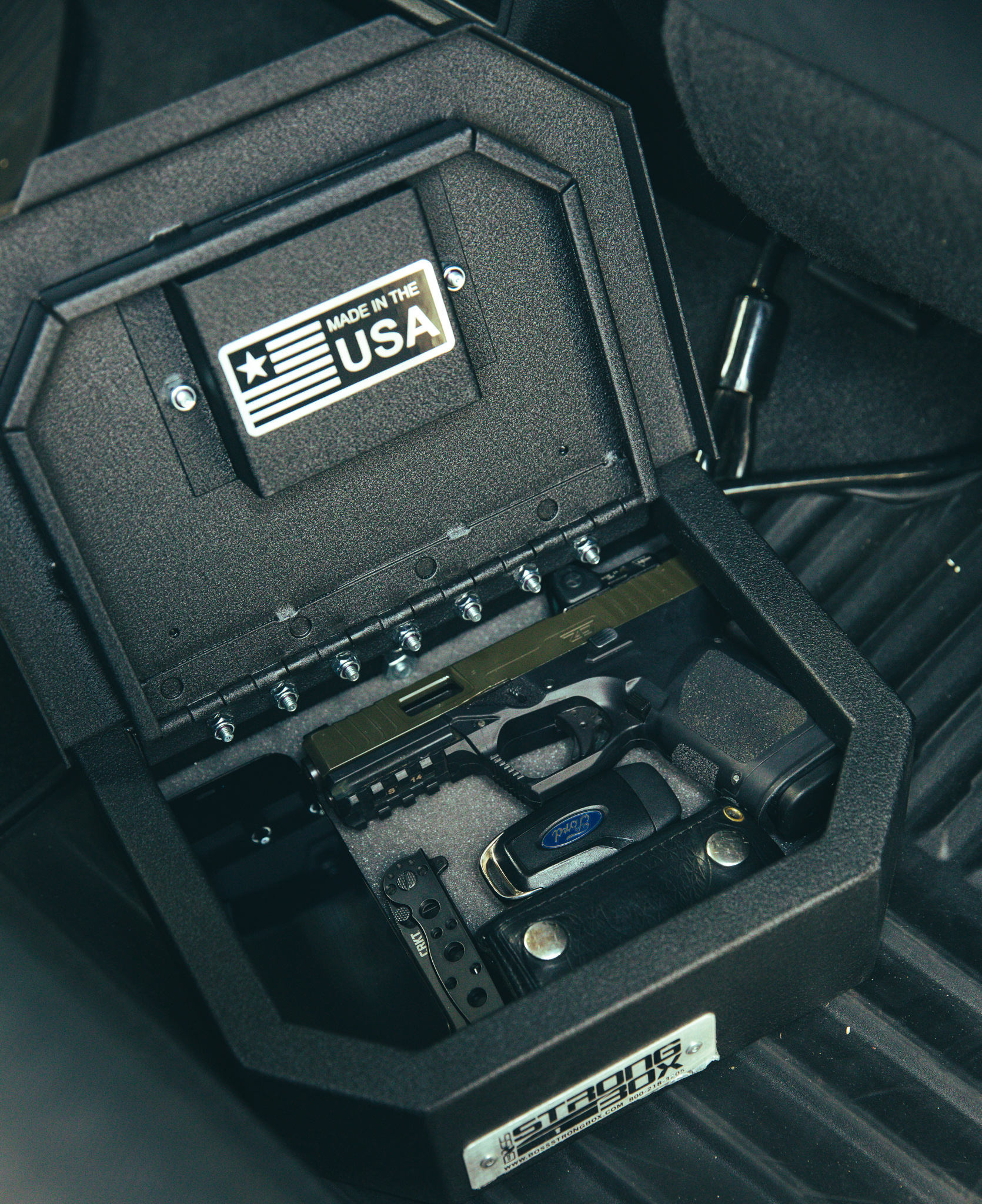 Maybe a full-sized gun safe is too much, too expensive or maybe you don't drive a truck. Don't worry, there's still some great solutions out there such as compact, portable safes that are able to tied down to a seat, locked in a trunk, or any hard-point in your vehicle.

There's plenty of times you might need to leave your EDC in your car, because it's just not possible to bring it with you. Perhaps you're spending the day at the beach, going to a courthouse for a speeding ticket, or you don't want to explain to the doctor why you have a gun in your pants. Smaller safes that can fit your EDC gear are the perfect solution. Here in sunny southern-California I spend a lot of time diving, where I don't want to bring any of the items pictured above. A set-up like that, and a car with touch-pad unlock, allows you to leave virtually everything safe and secure, and only have to worry about a key.

Best Way To Store Guns Without A Safe

Well, what if you don't drive a truck or SUV but you need to pack a lot of guns and gear for your range trip? A gun safe, portable or not, may not make sense for a smaller vehicle like sedans or even crossovers. Proper firearm storage is important but this is where knowing the law in your state is important — for many states, long guns do not require a bag or case when being stored in a vehicle as long the as long as it is in an 'inaccessible' part of your vehicle i.e. the trunk. So you could technically toss your rifle or shotgun into the trunk and as long as it's unloaded (in California) you're still operating within the law.

If your trunk does not have a window, even better. But if your trunk area does have a window... In these situations having a soft rifle bag or case is good to have at the bare minimum to keep the guns out of clear view. Regardless of your vehicle's trunk style, if you plan on leaving your guns locked in your vehicle unattended for an extended period of time you can opt to use a gun cable lock which can either block the trigger from being able to be used or a handgun barrel from being chambered with a round.

Have topics you would like to see us touch on, or any feedback for us? Make sure to leave a comment below! We want to make sure we are putting out content relevant to our customers, and what you want to hear! Knowledge is power, and we want to educate our customers on the topics they care about

What to put in your range bag?

Should I Cerakote My AR?