Why the AR15 is an Assault Rifle

Well, it isn’t an ‘assault rifle’ you uneducated simpleton. Read on to understand why.

The ArmaLite Rifle or “AR” has lovingly been deemed as an ‘Assault Rifle’ by today’s media. Now, I’m not exactly sure how an inanimate object can be capable of physical acts, especially one as sinister as assault—but clearly the mainstream media knows something I don’t.

In my humble opinion, the AR15 has a target on its back simply because it’s “scary looking”-- you don’t see the media crucifying the mini M-14 for being a weapon of mass destruction, though it is capable of EXACTLY the same thing.

I obviously don't agree with the media's label on the AR15 rifle, but rather than rant, let me explain why the AR15 doesn’t meet assault rifle qualifications. The United States military defines an assault rifle as something that meets all of the following requirements:

When looking at the list above, I would agree that the AR15 meets all of the following criteria except the capability of selective fire. The AR15 does not, and never has, had the ability to switch from semi-automatic fire to fully automatic fire like its big brother: the M4.

This one determining factor is what makes the AR15 legal for civilians to purchase off the shelves, as well as keeping it out of the militarized “assault rifle” category. Now don’t get me started on why I think civilians should be allowed to buy military weapons, that's a topic for another day, but I do find it downright unconstitutional that I can't finance a howitzer from my local gun shop. 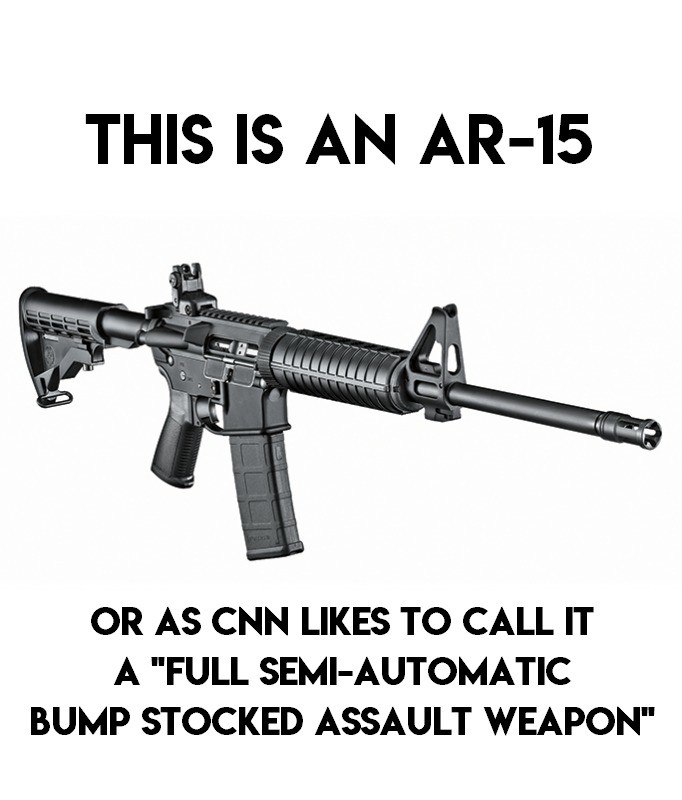 The qualifications for an assault weapon are very black and white. There is no gray area, there’s just yes and no--which has got to be why I get so annoyed when the media, government officials, and uninformed civilians cry and moan about how an ‘assault rifle’ is legal to own.

The fact of the matter is that I need one because evil people use them to hurt others. There is a famous quote:

“The only thing necessary for the triumph of evil is for good men to do nothing.” ― Edmund Burke

The AR15 is the most user-friendly firearm for defense that there is available. It is light, compact, with a low-recoil, and a high rate-of-fire. While unfortunately, these are the exact things that draw mass-shooters to them, they are also the exact reasons why it is the best weapon to defend yourself with. Not to mention, with the modularity of the platform, it is the best rifle for a variety of other tasks as well, whether it's hunting, varmint shooting, or even just learning to shoot.

I will not find myself outgunned when my life, or my families lives, depend on it. I wish to God above that people weren't using guns to harm other, and I wish this wasn't a conversation that we had to have. But the unfortunate truth is that there are evil people in this world, and they will do evil unless something stops them. The idea that taking away an object will make somebody better, or that the object is what makes them evil in the first place, is a very dangerous one. It is a slippery slope that leaves the good people of this country defenseless, and Evil to roam and do what it wishes.