On Sunday this week, July 17, 2022, a gunman opened fire in a food court at a mall in Greenwood, Indiana. Within 15 seconds of the chaos ensuing, a concealed carrier responded and ended the threat by returning fire. The suspect fired about 24 shots in total from police findings while 10 shots were fired from the concealed carrier at a distance of 40 yards with 8 rounds hitting the active shooter. The bad actor, who of course will not be named, attempted to retreat to a restroom but quickly succumbed to his wounds and fell to the ground.

Our hero’s name is Elisjsha Dicken who is 22 years old. He was carrying without a CCW permit but was legally doing so under Indiana’s Constitutional Carry law which had only passed into law 16 days prior on July 1. This event is negating several anti “good guy with a gun” arguments and the need for more people to be able to legally conceal carry. Had Indiana’s law passed any later, Dicken may not have been carrying that day. This is why we are such huge proponents of Constitutional Carry as it allows more law abiding citizens to have the opportunity to legally carry.

Unfortunately, four lives were still taken which classifies this as a mass shooting (the 8th one this year) but given the immediate response from our “good guy with a gun” there would have been scores more among the victims had it not been for his quick reaction. According to the local law enforcement officials, they affirmed Eli of his tactics and performance under pressure as he advanced on the shooter while motioning for people to get behind him.

The mainstream media would have you believe that this is a rare occurrence but in fact it is not. Both sides of the aisle are pointing at each other claiming that the opposition’s stats are incorrect or false. Well, let’s take a look at some of the data then. A key problem comes from where you get your information and what methodology is used in presenting the “facts.”

To have a better understanding of where any “research organization” is coming from in their presentation of data we have to know the controls that were considered in the study. Some of these factors include:

All these and more would have to be used to determine defensive gun use prevalence.

So when the anti-gunners are spouting off numbers like “for every successful self-defense situation involving a gun, there are 35 more cases where a gun was used in a criminal act.” That’s no different than saying “there’s been more mass shootings than days in the year.” In a sense it’s hyperbole, but more accurately it's cherry picking and twisting data to fit their own narrative. We’ve written about this before but it’s ironic that the CDC actually presents data that supports our case — guns are used more for self-defense than crimes. (Reminder: gun related deaths are also among the lowest fractions of among the leading causes of death in the United States). 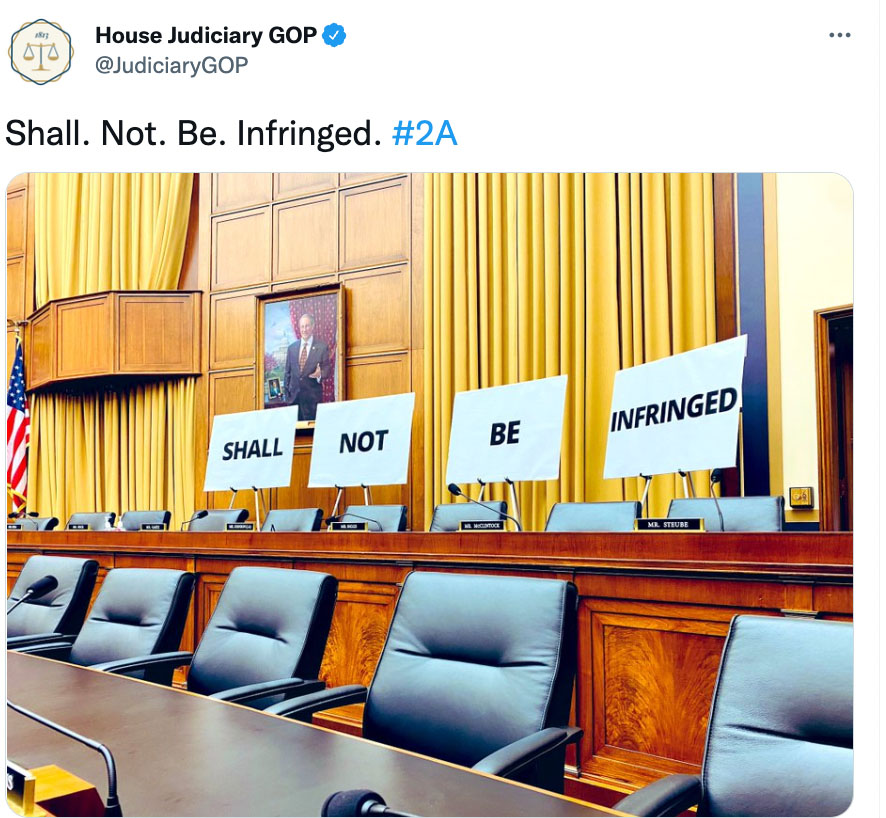 Let’s talk about the circus that was the House Judiciary Committee this week (they passed the HR1808 and approved it to go to the floor for a vote by the entire House). It’s been a treasure trove for online memes but amongst the jokes is a stark reality that we now face - it’s out there now, some anti-gunning Dems are publicly admitting that they’re coming after our guns. There’s no biased exaggeration, no tin foil and certainly no falsehood here. HR1808 is not about curbing gun violence or reducing crime to make Americans safer.

During a hearing this week, the Chairman of the House Judiciary Committee, Congressman Jerry Nadler responded to this question; “Who (any Democrat) would dispute that this bill would ban weapons that are in common use in the United States today?” Nadler responded, “that’s the point of the bill, the problem is that they are in common use.” It’s funny because in the CSPAN recording you can hear someone try to stop Nadler from digging their own metaphorical grave for this bill.

All funnies aside, where is the silver lining here? Well, an “assault weapons” ban would be unconstitutional if it banned firearms that are in common use. There are several historic legal precedents for what are known as “common” standards. You can read more about that at length from our link to Harvard’s Law and Policy Review on how those standards are related to the 2nd Amendment. Here’s to staying hopeful.

But should HR1808 (it currently has 212 cosponsors already) come to pass, it will be the newest version of a federal assault weapons ban even far more comprehensive than its original counterpart in 1994 which would ban any pistol with the following features:

Let’s not forget the other ridiculous things that were said such as: 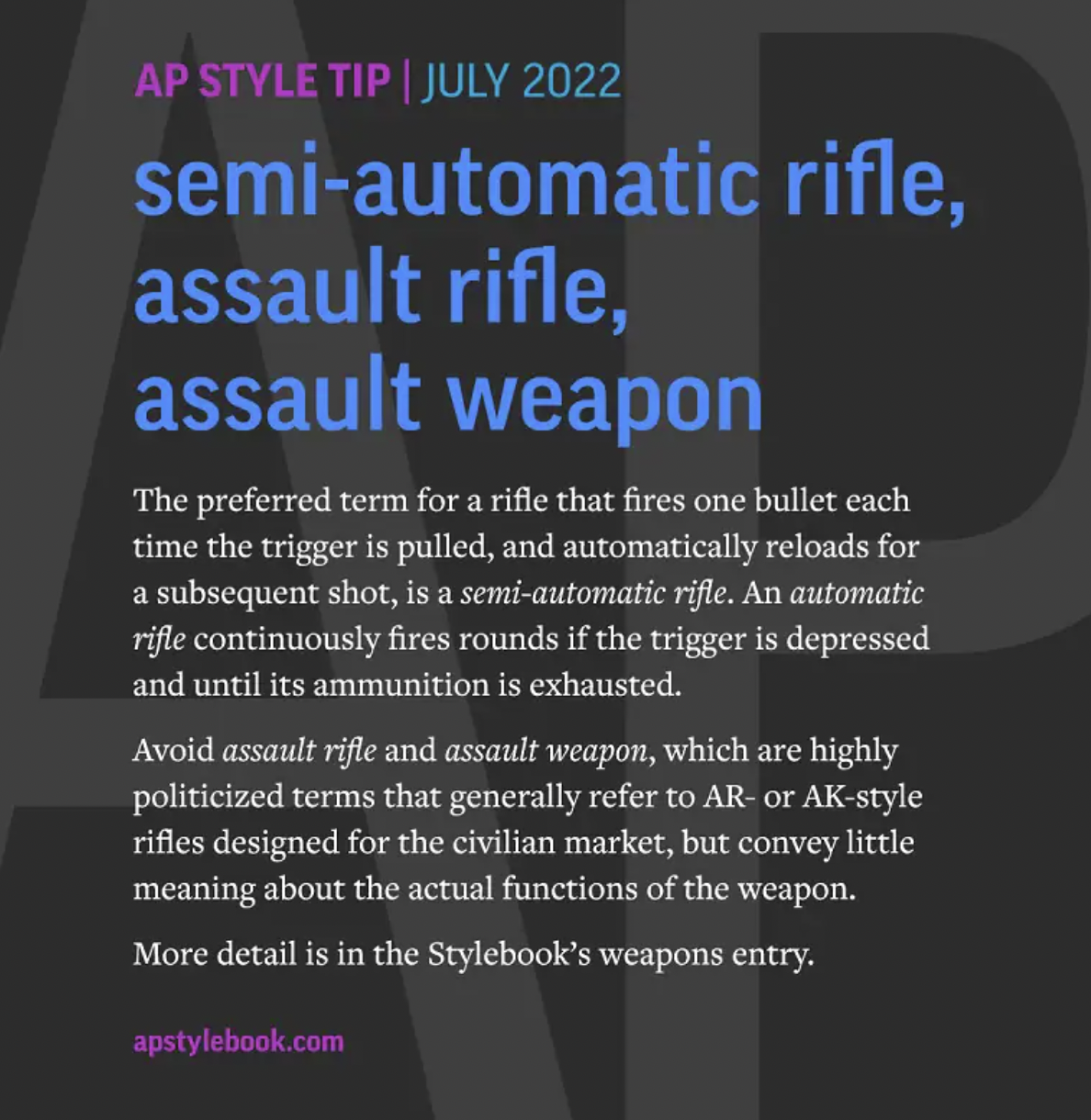 Or how the M1 Garand is a historic relic and an ancient weapon… a firearm that was not included in the new proposed assault weapons ban. Odd, the M1 Garand was quite literally a “weapon of war.” 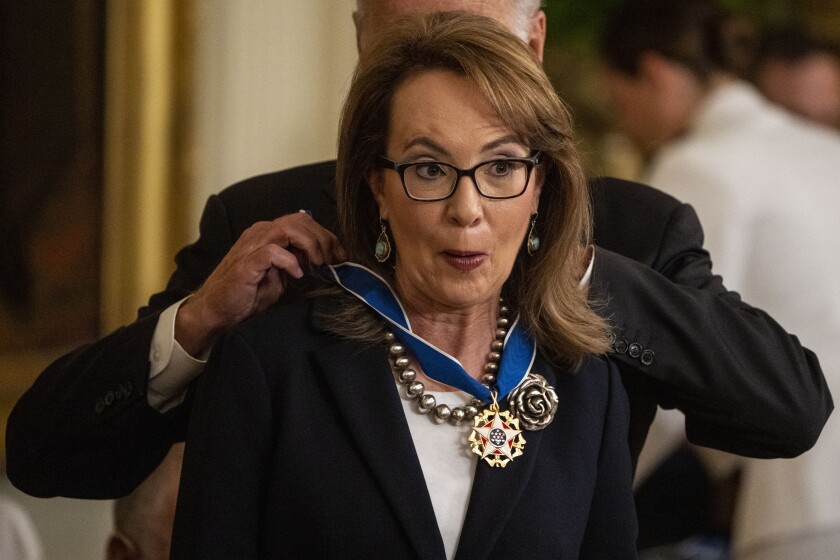 The Medal of Freedom is our Nation’s highest civilian honor.

It feels wrong that one of the largest anti-gun crusaders in the nation has received the Presidential Medal of Freedom. The prerequisite? “An especially meritorious contribution to the security or national interests of the United States, world peace, cultural or other significant public or private endeavors.” This story flew under our radar on the 4th of July weekend due to the Highland Park Mass Shooting but we felt the political relevance important to bring it forward. On that week, Gabby Giffords was among 17 recipients for this award.

Yes, Gabrielle Dee Giffords did survive a gunshot wound to the head in an assassination attempt (now being lauded as a film subject) so it would be disingenuous for us to say that she knows nothing about violent gun crime. However, it’s just ironic, because the Giffords Group does one thing and one thing only which is to limit the 2nd Amendment right for Americans - effectively reducing our freedoms and creating draconian standards in which only the wealthy enough and powerful can afford this constitutional right and the freedom to keep and bear arms.

There should be no surprise that Giffords strongly endorsed Biden in his 2020 election for president. The Giffords organization is only second to Michael Bloomberg’s Everytown organization, both are anti-gun lobbying giants. Based on public data compiled by Open Secrets, Giffords PAC spent more than $11 million dollars during the 2020 election cycle alone and another $6.2 million during the 2022 election cycle beginning in May this year.