First of all, we commend you for being here. There’s a pretty large subculture of people who don’t shoot with ear pro because that’s just how they grew up, it’s part of some types of hunting culture or some people think they’re “tougher” without any ear pro. Unless you served in the military or are a law enforcement officer (then it can’t be helped a lot of the time), there’s nothing tough about not being able to hear anything. It sucks. And if you’re not there yet but on the way to being deaf, tinnitus isn’t fun either. Baby Driver just makes it look cool. 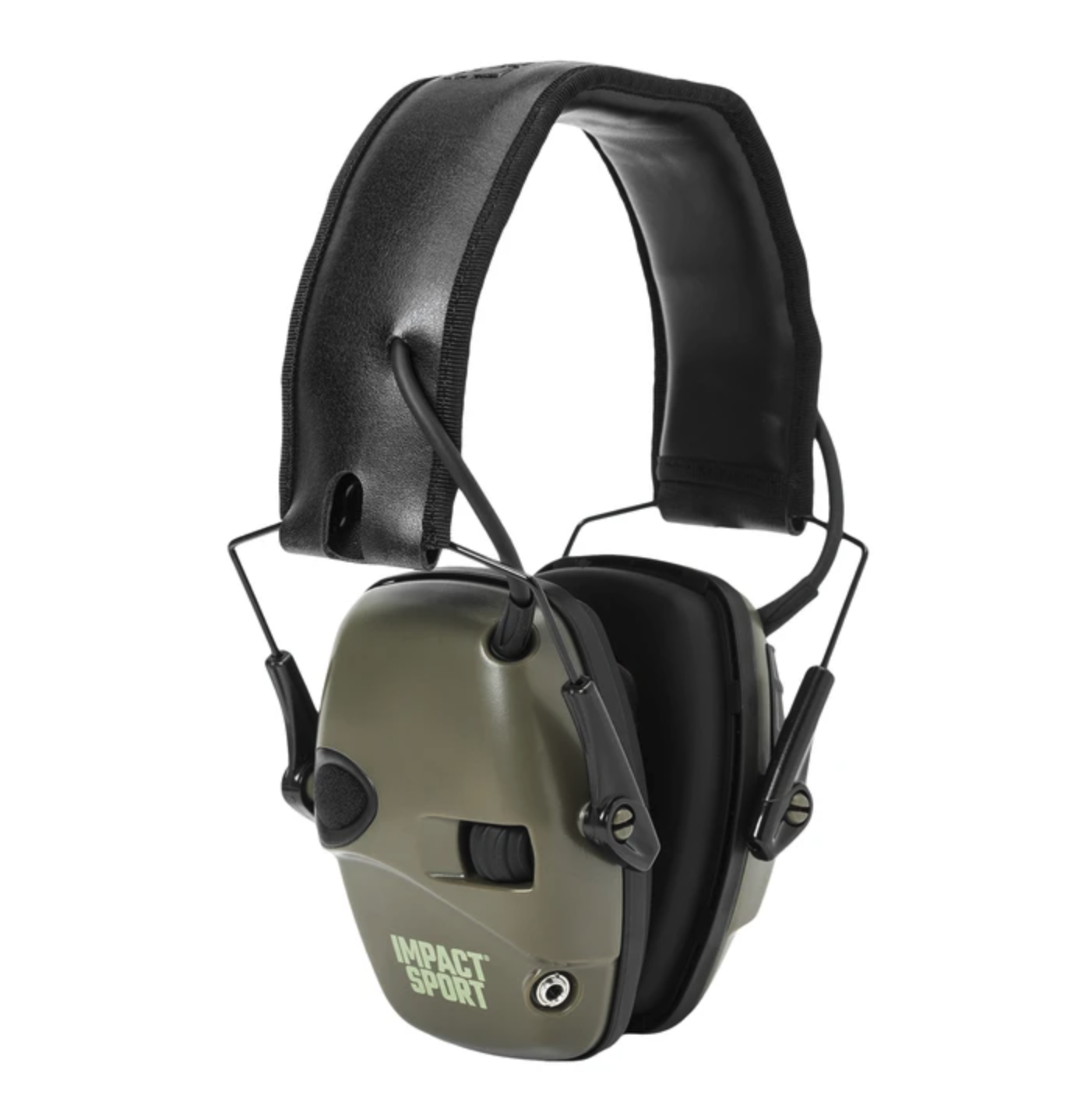 For affordable quality and good hearing protection, Howard Leight is not a new name in the ear pro game. You might also be familiar with Howard Leight ear plugs that come in red and green colors for different levels of decibel reduction. Impact Sport headsets have a 22dB (NRR) noise reduction rating and when turned on directional microphones will amplify ambient sounds up to a maximum of 82dB. Although you certainly don’t need to have the sound amplification maxxed out, this feature allows you to clearly hear commands while on the range and be able to hold a conversation with your buddies while others are shooting too. If there’s a loud explosion or sounds exceeding 82 dB, the Impact Sport will cut off all amplification from the mics to protect your hearing. Its headband is comfortable and so are the ear cups, however, having owned my Howard Leight Impact Sport earmuffs for over seven years I’ve had to recently purchase aftermarket earcups to replace the original ones due to sound leakage and it just wasn’t fully sealing around my ears. Now, it’s like they’re brand new and ready to run for another seven years.

The Howard Leight Impact Sport has been around for the better part of the past decade and hasn’t seen much changes just because of how great the initial design was with the exception of several new colorways and the updated line of electronic earmuffs called Impact Sport Bolt. 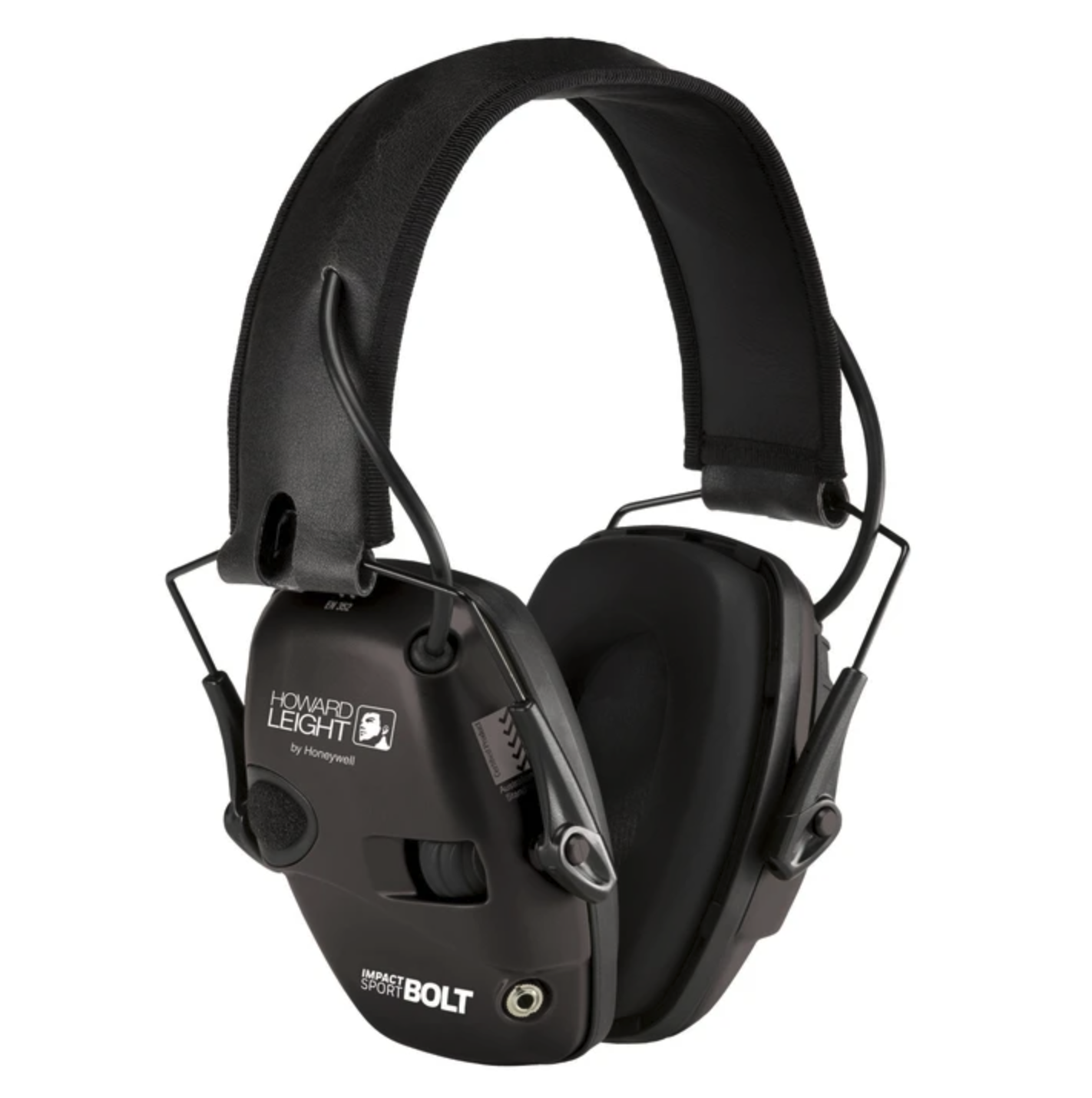 With the Howard Leight Impact Sport Bolt, it’s an update on the original Impact Sport model with a couple of key updates — featuring a new digital microprocessor which delivers 0.5 millisecond attack time for the best possible gunshot noise-blocking and least amount of ambient hearing protection. That’s 250 times faster than the previous model. What that means is that there’s less of a chance for unwanted loud sounds to creep through the microphones and an even less chance for normal levels of sounds to get mistakenly cut out. Like its predecessor, the Impact Sport Bolt also has a passive NRR of 22 dB but this time it comes with a second set of gel earcups too! Howard Leight really covered all the bases with this one. 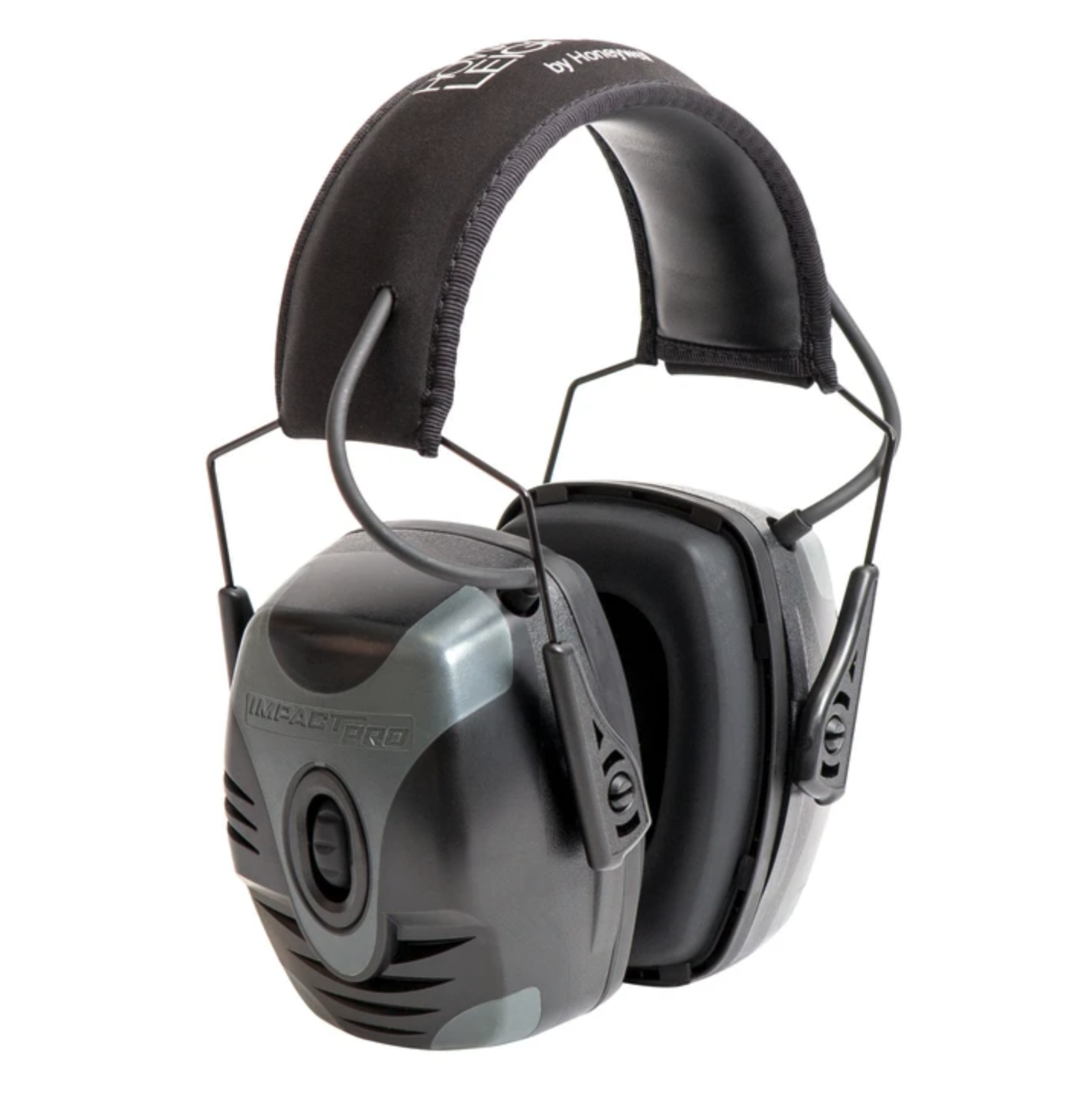 The Howard Leight Impact Pro earmuffs are an older and beefier model with the same tech as the Impact Sport line. However, the Pros have a NRR of 30 dB and the headset is substantially beefier. At a glance, you wouldn’t even be able to tell from its shape and profile that someone is wearing electronic earmuffs. Last but not least, the Howard Leight Impact Pro’s headband is larger and wider, making it even more comfortable to wear for longer periods of time. If you don’t plan on running around while shooting and plan to be more static or moving slowly, this would be a good headset for you.

When looking at budget electronic earmuffs for ear protection while shooting, the other go-to brand would be Walker’s and their line of Razor Electronic Muffs, as they are the cheapest. They have several different models, features and attachments so it’s best to think of them similarly to how cars will have different trim levels. 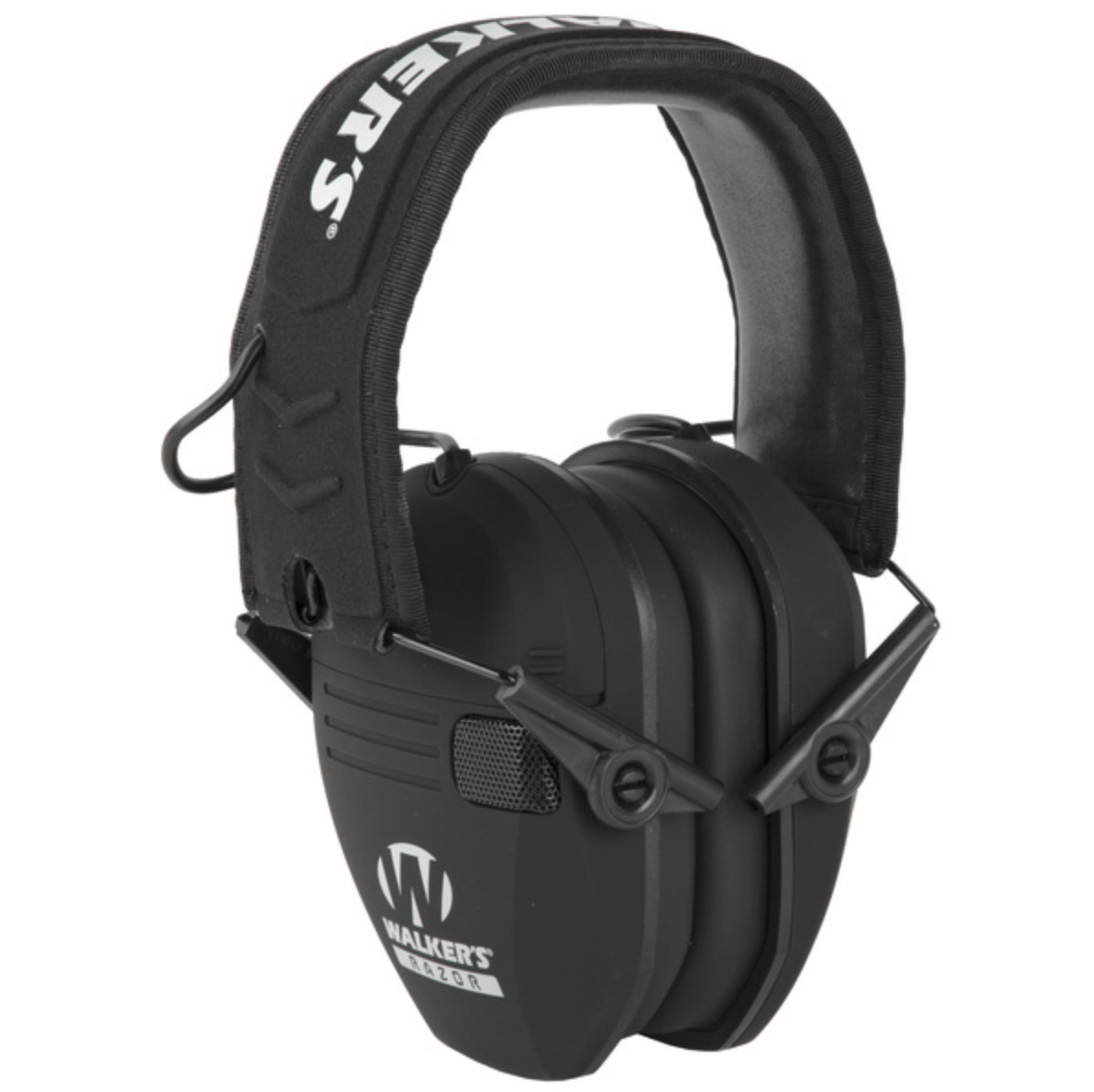 Their “base model,” the Walkers Razor Slim is a very lightweight and comfortable set of electronic earmuffs that provide ample hearing protection with a NRR or 23 dB. The low profile earcups are soft and along with the comfy headband, it doesn’t pinch your head too tightly which allows for long periods of use. Like their competitors, the Razor Slim also sports two omni-directional microphones and they’ll shut off automatically within .02 seconds when sounds over 89 dB have been detected. They operate on two AAA batteries and also include a 3.5mm audio input jack to connect to a handheld radio (works for phones and mp3 players as well but we don’t recommend that distraction). Other viable headsets from this brand include Walker Razor XV, Walker Razor Bluetooth and the Walker Razor Pro.

We’re not exaggerating when we say that Walker has A LOT of different models, some 20 odd versions or so! That also extends to Walker’s accessories. Here’s a short list of all the gear they carry:

3M, the American conglomerate corporation that makes Scotch Tape, Command Strips and construction helmets also makes the same headsets that our Special Forces soldiers use. Their line of hearing protection and communication devices is called Peltor which also includes several models made not only for military or law enforcement purposes but some for construction or other industrial safety purposes. 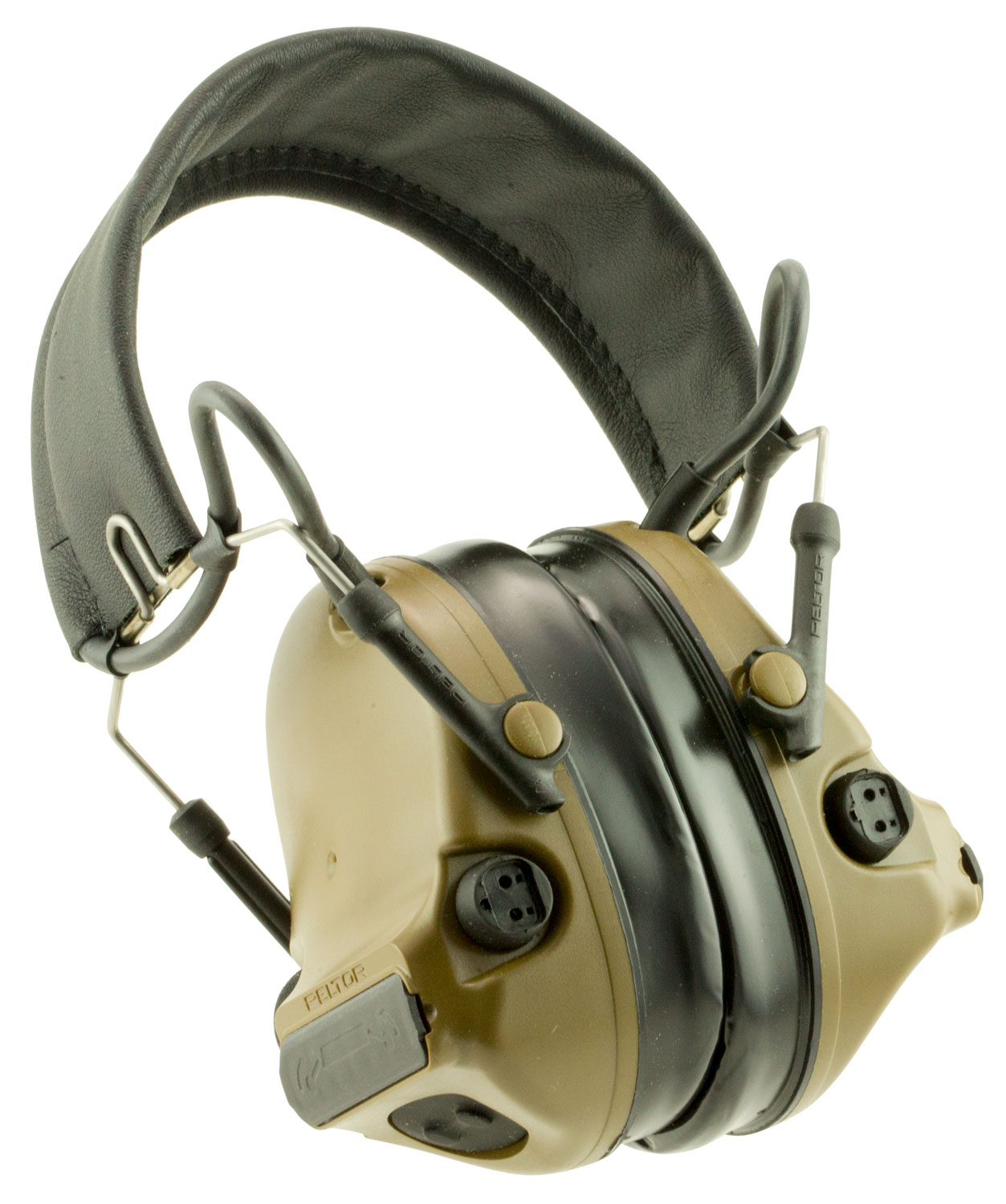 If you just imagine soldiers wearing helmets with electronic earmuffs with boom mics, it’s probably a product from Peltor. The Peltor ComTac III is the cheapest model among the incredible lineup of badass looking ear pro that Peltor has to offer. ComTac III’s will run you for “as little” as $369.99 but depending on which model you choose they can easily cross the $1000 threshold. Peltor Comtac III earmuffs have a 23 dB NRR and easily the most comfortably earcups that come stock with a headset, though, they are not very breathable so you can expect to sweat a lot with them.

The biggest advantage Peltor Comtac III or Peltor Comtac VI have over products from Howard Leight or Walkers is the level of clarity in the sound and ability to provide the user full situational awareness of their surroundings. Peltor mics also cancel noise and only let in human speech through its filter for optimal communication. Now that’s not to say there aren’t other brands that can offer these features and functions as well, but Peltors probably do it the best and are most likely among the toughest products in terms of durability. If you like Peltors with the headband that they come with that’s great. Otherwise, you can also opt to use ARC Rail adapters to mount them to your Ops Core Helmet. 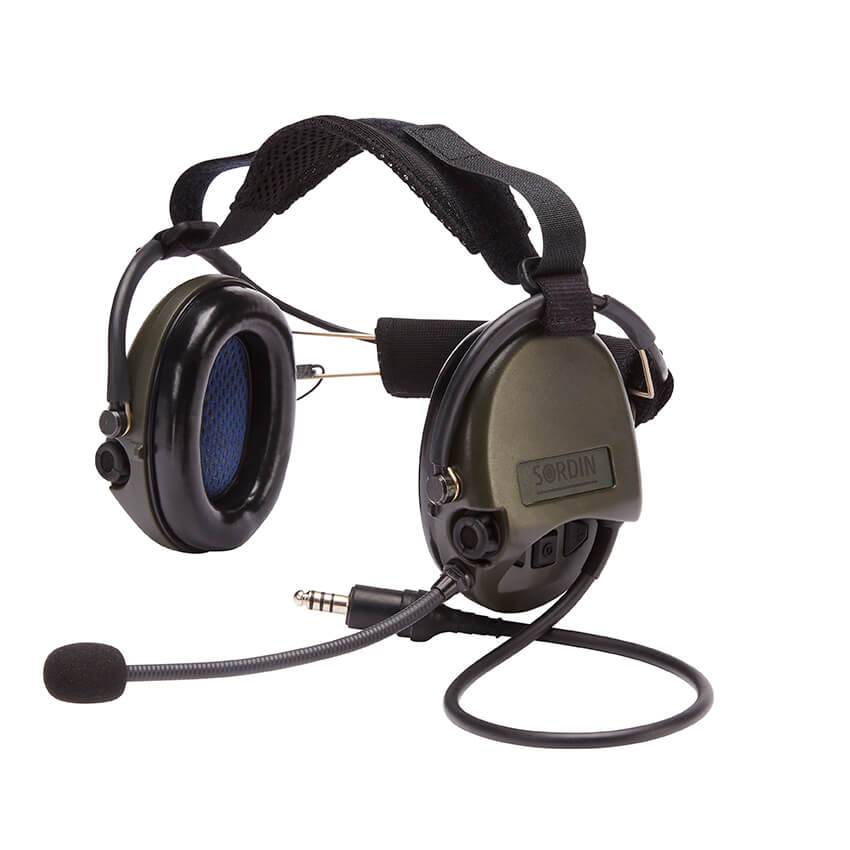 If Peltors are too intense for you and just a little bit out of your budget you can also consider MSA Sordins. They offer a few different models that do the exact same thing as Peltors, some even come with microphones and for a much lower price. You can run comms through them, they’re waterproof per IP67 rating and they can also be worn with helmets on ARC rail adapters. It does you no good to buy a more expensive brand name’s cheapest ear pro option so if you’re going to buy a MSA Sordin headset it’s best to just get the top of the line products — like the MSA Sordin Supreme Pro X or the MSA Sordin Supreme Pro-X Neckband version.

For best all around use whether it’s at a shooting class, while you’re at a indoor or outdoor range, shooting alone in the desert or even in an airsoft game we think the Howard Leight Impact Sports give the most quiet bang for your buck. If you can splurge a little you could try their updated model, the Impact Sport Bolt too. Because of their affordability, Walkers Razor Slim earmuffs are just really handy to have around. However, Walkers Razor Slim earmuffs are probably best for your friends that are beginners or first time guests at the range who won’t be able to tell the difference in sound quality or appreciate it either.

Yes, Walker’s has higher “trims” in their line of Razor earmuffs but at the same or lower price point, we’d still prefer Howard Leights. If you're keen on the Walker Razor Slim earmuffs then try to get the Now if you want to really larperate or if you actually have some duty functions in the military or law enforcement then just toss a coin between Peltors or MSA Sordin headsets and choose what best fits your budget because either brand will do great and serve you well.