Before we break down the difference between the two rounds, first we need to understand that these configurations are NOT for a .223 chambered rifle. The M855 and M193 are 5.56x45 NATO caliber, which while derived from the .223 Rem.—are not the same. The 5.56 NATO caliber has a much higher power load than the civilian .223, so make sure your rifle can handle the increased 5.56 pressure before sending one of these pills downrange. Keep in mind, the difference between the M193 vs M855 is small, and though the military may have moved on, that doesn’t mean the M855 is necessarily best for you as well.

It all begins with the first standard NATO rifle cartridge, 7.62x51mm, which was selected in 1954 but here in the United States we were concerned about the recoil and effectiveness of the caliber. So instead of complying with the way the rest of the world likes to do things, of course, Americans came up with the .223 Remington instead (more on that later). By 1963, the .223 Remington had been SAAMI certified, accepted by the US military and given the name designation, “Cartridge, 5.56mm ball, M193.” Then, in 1970, NATO adopted the FN-designed version of the .223 Remington, called SS109, which is why it’s widely known as 5.56 NATO today.

The M193 is essentially the standard, average, or ‘run of the mill’ 5.56 rounds. Used in massive quantities by our troops overseas; the M193 is a 55 grain, lead cored, full metal jacket projectile with a muzzle velocity of 3,250 fps. What these characteristics mean for us, is that this light bullet is flying extremely fast, and is generally unstable (a good thing) when it contacts a target. This tumbling effect leads to an increased wound cavity, and ultimately, lethality. Known to be prone to fragmentation upon contact, these rounds are not made to penetrate any sort of barrier, armor, or hardened material.

Heavier, slower (slightly), and greener, the M855 is a 62 grain 5.56x45 caliber bullet traveling around 3,000fps at the muzzle. Also a full metal jacket, the green tipped M855 comes loaded with a 7 grain steel penetrator-tip which provides the M855 with far superior penetration when compared to the M193. Though it is slower due to the increased weight, the M855 actually sports a higher ballistic coefficient because of its increased length; allowing it to shoot flatter, with les drop and windage shift over long distances.

Don’t get too caught up on the steel tip of the M855, as it is not really an armor penetrating round. Though it does have significant resistance to fragmentation over the M193, the M855 just does not have enough energy behind it to be reliable when called upon for penetrating armor, barriers, or even windshields/glass. 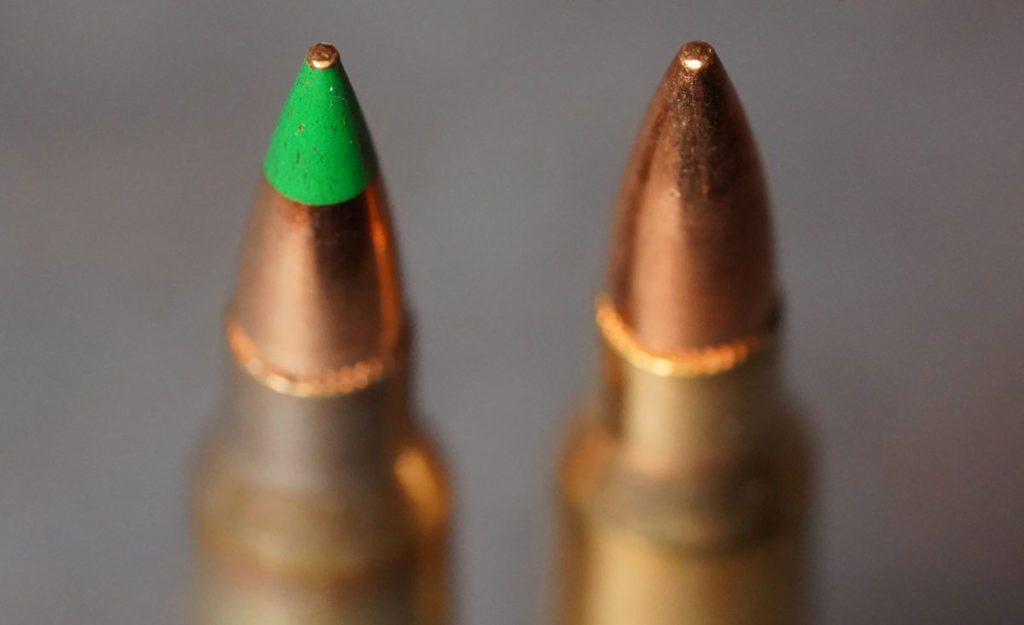 As cold war tensions continued after the Vietnam War, a frowing concern was the the M193 round would not be able to penetrate the body armor Russians were beginning to wear (and which wasn’t an issue in Vietnam). FN-Herstal began to develop a new round for NATO forces that was capable of penetrating a Russian Helmet at several hundred yeards, a round called the SS109. After much testing and adoption by various NATO countries, the United States officially adopted the new round and designated it the M855, phasing M193 out. Amost immediately, a concern about lethality arose during engagements in the first Gulf War, and in Somalia. The rounds were reported to punch straight through an enemy combatant, leaving nothing but a clean hole. With these issues continuing well into present-day, the military has now created and adopted the M855A1 to solve most of these issues.

This about sums it up. Most people tend to buy things just because the military uses it, so they assume it's the best for them too. Do you even operate bro? Because if so... you would be shooting Mk262 Mod1

When you see 5.56mm with green tipped bullets you might think “oh no, cop killer!” “Armor piercing rounds!” “Illegal ammunition!” All of these are false. The practice of marking M855 bullets with green color was for military purposes so that personnel could identify which bullets were M193 and which were M855. When it comes to just about anything related to guns or ammo, Hollywood typically exaggerates to the point where fact becomes fiction. Don’t believe everything you see on the silver screen.

Is green tip ammo bad for your gun?

Some M855 5.56mm ammo is made in bulk and there’s this myth that it’s not good for your rifle. That’s not true. It may be less accurate ammunition, however, it is in fact completely safe to fire in an AR-15 rifle chambered for 5.56.

There is no clear ‘winner’ in this comparison. Each round is better at different things, so it is entirely dependent on your needs and application. If penetration or longer distance is at the forefront of your mind, the M855 will likely suit you better. However the M193 is probably a better choice for hunting, as it fragments more easily and causes more terminal effects in the intended target. If I was going out to buy ammo for, well, really for anything; I am going to buy high quality M193 rounds. The fragment better for both hunting and personal defense, and at the distances where the M855 beats it's trajectory, it's typically too far to take an ethical shot anyway. Plus, who wants to spend more on ammo, only to destroy a steel target?

The M855A1 was being developed around 2010 and has only been in full use for about five years now with the Army. Following the demand for an updated round to improve upon the M855, the Marines chose to go with the MK318 Mod1 to use a bullet with a copper core for better penetration after defeating a barrier. However, the Army chose a different approach and went with the M855A1 EPR (Enhanced Performance Round) which also utilizes a copper core, eliminating lead from production and production hazard to the environment, but is a two piece system where there is a steel penetrator and copper core.

Upon impact with living tissue, the damage can be devastating as the two pieces go in different directions. This is also extremely helpful when needing to defeat a hard surface such as concrete walls, glass windshields or hard body armor. With increased velocity and a higher ballistic coefficient than M855, the A1 round is incredibly accurate with “match” like accuracy. The M855A1 also has reduced flash due to improved propellant. All these pros and no cons, just kidding. Prior to COVID-19, this cartridge already cost about $1.50/round. During the pandemic we’ve seen prices for it go up to anywhere between $3 to $5 per round. It’s an amazing round for sure, but if you’re a dirty civilian like me, M193 will do you just fine.

Regardless of if you are building a .223 Rem. or 5.56, 80% Arms has what you’re looking for! Come browse our large variety of  uppers, lowers, parts and accessories