If you follow our blogs and social media you might see a lot of tactical lights on our guns. They look badass, are useful in low light situations and yes I am an adult that’s scared of the dark. If you’re in the market for a new tac light for your pistol then you’re in luck because that’s what we’re reviewing today.

Our comprehensive list of the best tactical pistol flashlights includes flashlights from Surefire, Streamlight, Olight, and Inforce. We also talk about tac lights you should probably avoid.

SureFire has been a staple company when it comes to tactical pistol lights. If you want to avoid the debates, doing extensive research and, or enjoy subtly flexing, then look no further and just get a SureFire weapon light. 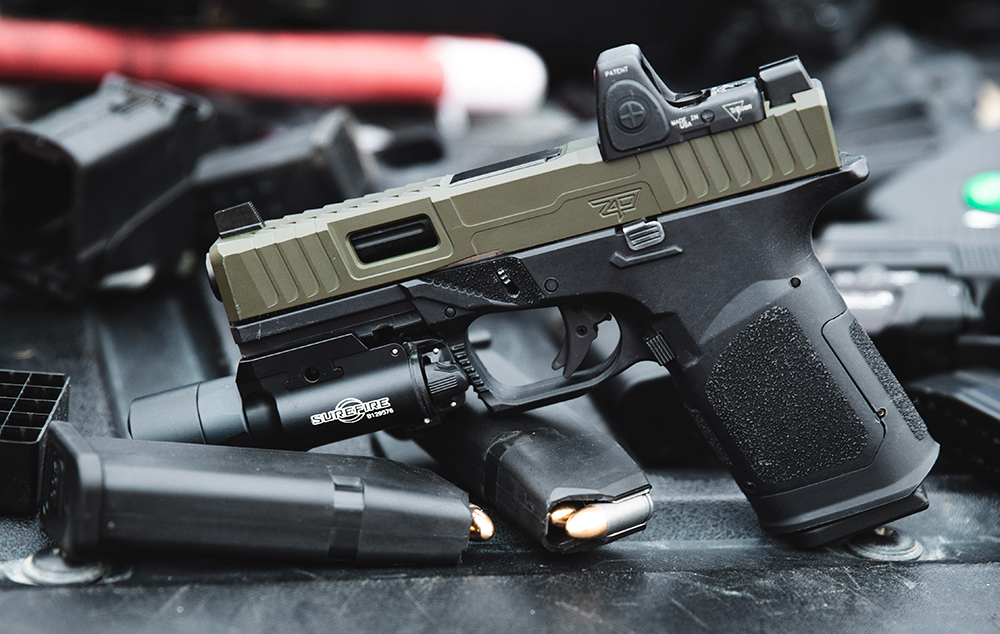 The X300 Ultra Series is as colloquial of a weapon light as Kleenex is to tissues. Every X300 light will come with a TIR lens which creates a precise, smooth and tight beam with enough surrounding light to see objects or people in the peripheral area. The light can be toggled on and off by pushing the button forward on either side of the light. To have the light be constantly on you can twist the switch sideways (either to the right or left, both directions will work) which will lock it in place. Twisting it in the opposite direction will turn the light off. The  X300U has several versions and to be honest some people will even use it on their rifles.

If the name designation ends in the letter ‘A’ or ‘B’ it’s referring to the attachment method. Version ‘A’ means that it’s a quick release and attach system. Version ‘B’ means that it uses a flathead screw to stay in place on a picatinny style accessory rail. If it ends in the letter ‘V’ that stands for Vampire and is the IR friendly version. For those needing a pistol light with a laser or for night vision purposes, you’ll want to look at the X400 series.

Streamlight used to get a bad rap for being an “airsoft” light, which couldn’t be further than the truth, and I admit I used to be in that camp. However, Streamlights are currently some of the brightest, most affordable and quality lights on the market today. No, they’re not as fancy as SureFire but if you’re on a budget, typically you can get two Streamlights for the price of one SureFire and that’s pretty hard to say no to. 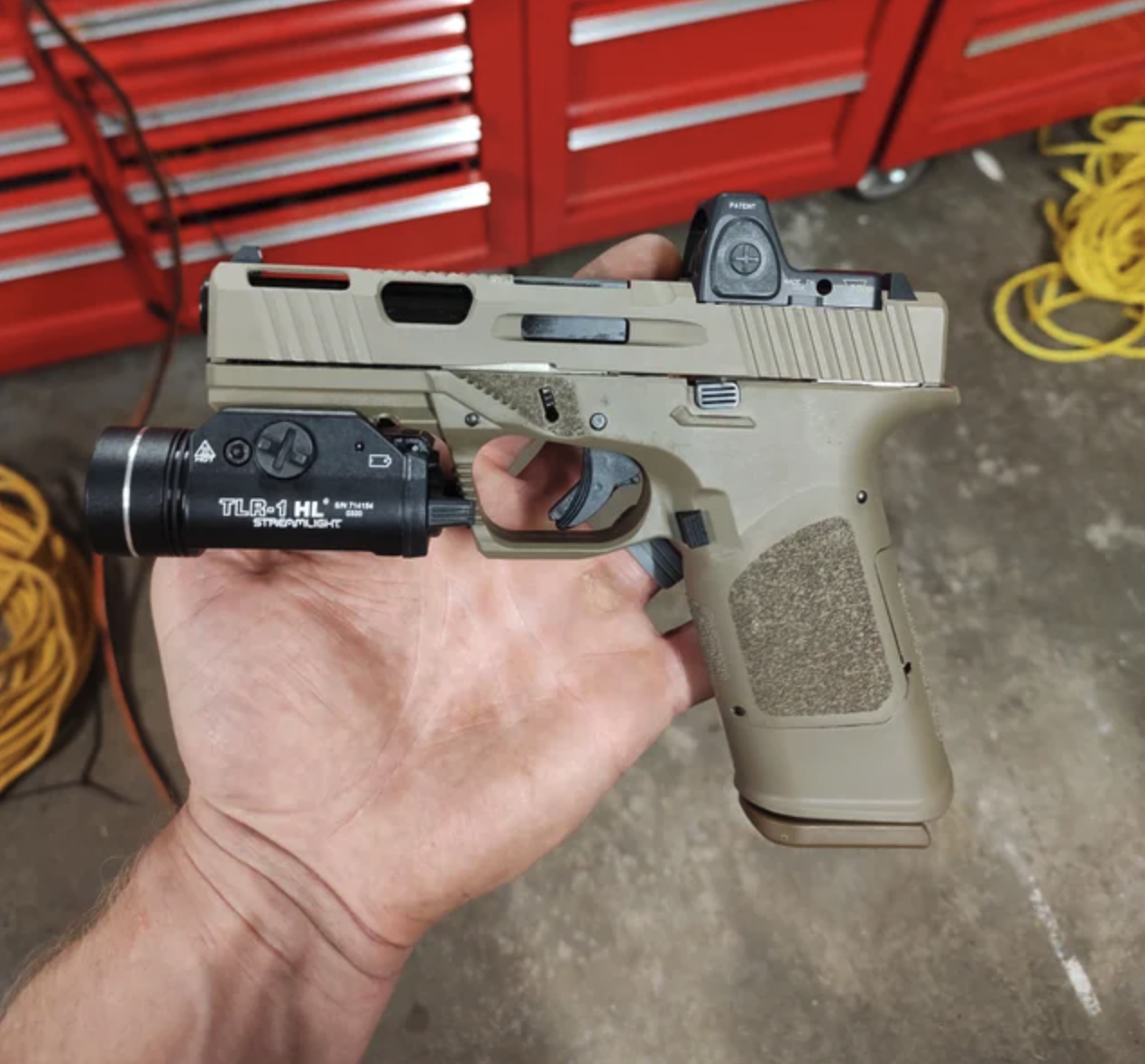 The  TLR-1 HL series of handgun lights from Streamlight would be a competitor to SureFire’s X300 as it comes in black and FDE. You want to make sure you buy the TLR-1 that has a ‘HL’ designation which is a 1000-lumen pistol flashlight. The TLR-1 without the ‘HL’ designation was only 300 lumens, hence people making fun of Streamlights. TLR-1 HL controls are exactly the same as the X300 which is super convenient if you own both brands’ lights — that style has really just become the standard for how people intuitively assume a pistol light should function. If you really like the TLR-1 HL but want a laser too then you’re luck, just take a look at the TLR-2. 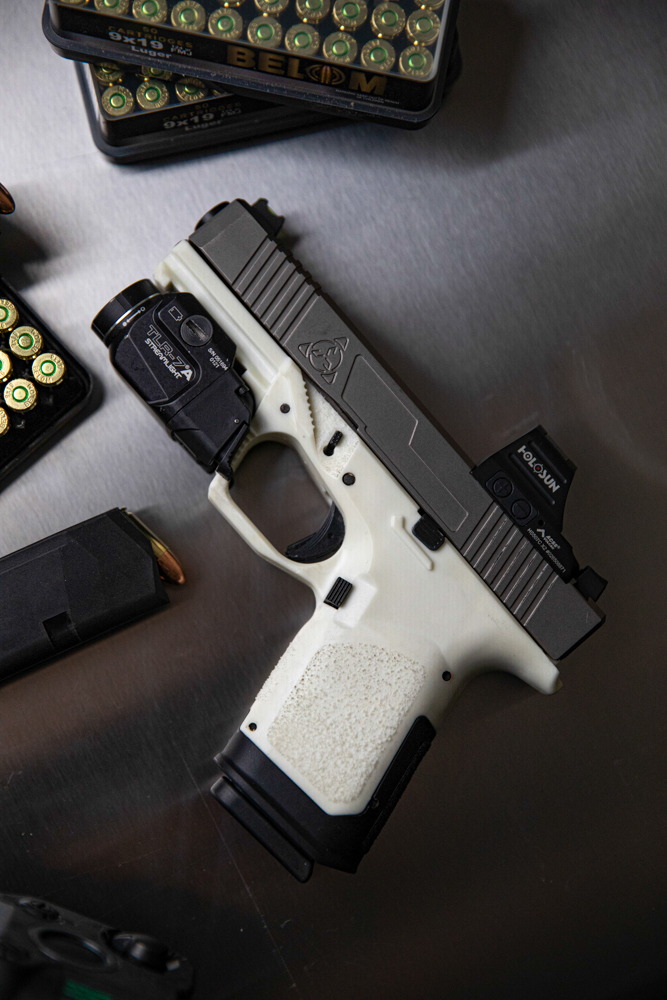 Streamlight’s TLR-7 can be compared to SureFire’s XC-1 as being great for compact handgun lights. The TLR-7 will fit on the accessory rail flush with the slide length of just about any compact pistol such as the Glock 19, CZ P01 or of course our very own GST-9. The newest version of this pistol flashlight is the  TLR-7A. Make sure you get the version that has the ‘A’ in the name because the newer model’s controls are located at the rear of the light which are a welcome upgrade. Comparatively, the older model had the control switches on the side. Also, reason we’d pick the TLR-7A over SureFire’s XC1 or XC2 is because the XC series is just too expensive for how little output it has lumens-wise.

To toggle the TLR-7A light, simply push either the left or right side’s switch forward and keep the button depressed. If you want it to turn off in a toggle fashion just let go of the switch. The switches are thin but tactile so they feel pretty nice but since the buttons don’t protrude as much you might have to reach a little bit if you’ve got shorter fingers or smaller hands. To keep the light constantly on, briefly press the switch and quickly let go of it in under a second. That will keep the light at ‘constant on.’ To turn it off simply repeat the previous step. Pretty hard to go wrong with this light but if you want to be extra with a laser, you’ll want to grab the TLR-8. 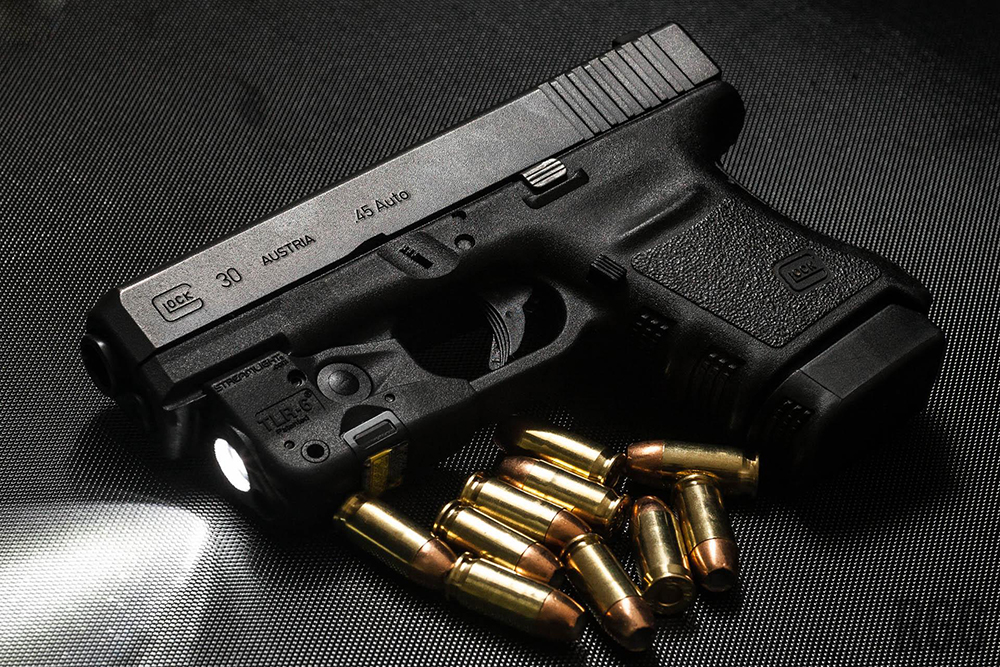 The  TLR-6 is a tactical pistol light for subcompact handguns that don’t come with a picatinny style accessory rail such as the Glock 42 or M&P Shield. However, we’re not necessarily including this tactical light for its flashlight. We’re actually including it for its red laser feature. With subcompact handguns it's safe to assume that they’re typically used for concealed carry purposes. In the event that a gun with the TLR-6 is used in a self-defense situation, having that laser is going to be pretty helpful for aiming at a target point blank and on the fly (especially since the flashlight on the TLR-6 only has 100 lumens).

If you’re not wanting the more common tactical pistol flashlight options and don’t mind venturing into other brands for experimenting or simply because of price, we take a look at some competitive alternatives offered by Olight and Inforce.

Olight gets a good amount of flak as a tactical light for the “poors” but we’re not above saving a buck or two and actually like a few of their products. While we would not buy an Olight for rifle usage we would definitely consider them as a very viable option for pistol lights. 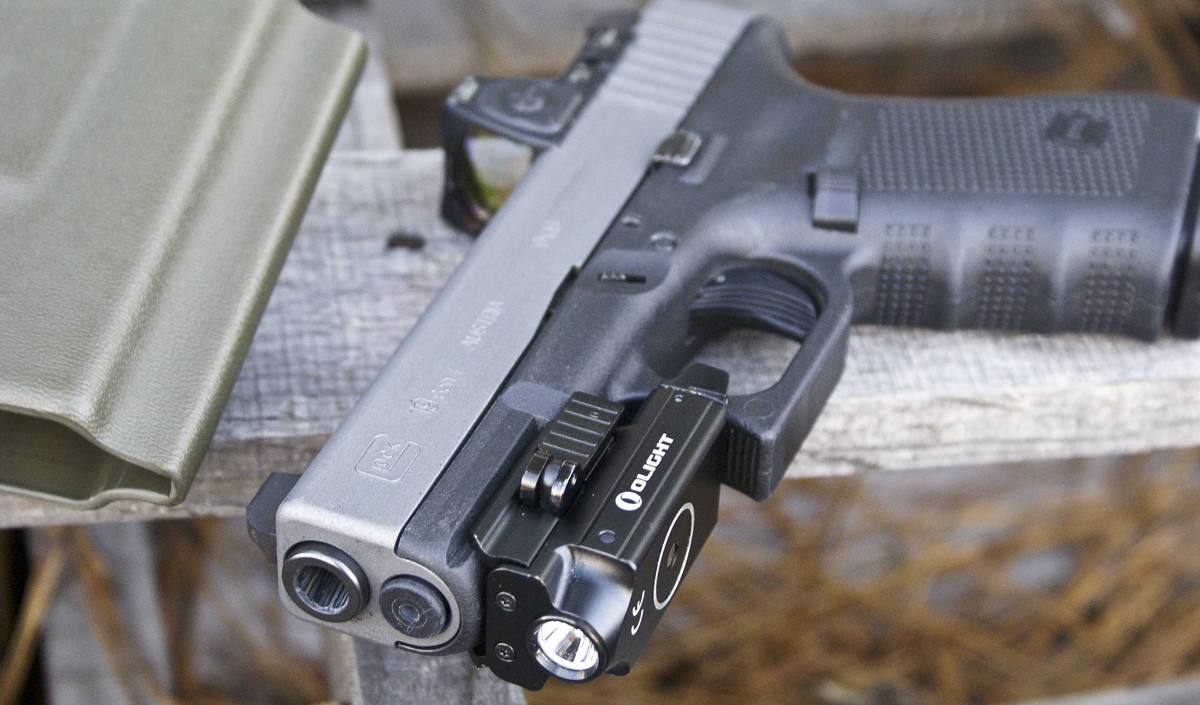 Alright, this little guy definitely punches above his weight class. For $89.95, the  PL-Mini 2 offers 600 lumens with a rechargeable battery that’s charged by a magnetic USB cable. The magnetic USB cable comes with a convenient light that will shine red if the battery is empty and charging; it will also shine green once the battery is full and done charging. The rail adapter is adjustable and utilizes a quick detach clasp which looks bulkier than we’d like but hey, the price! Think what you will of Olight but this pistol light has been widely accepted by the gun community as many custom holster makers include this light as an option for their kydex moldings. Definitely worth taking a look if you concealed carry or in general own a compact size handgun 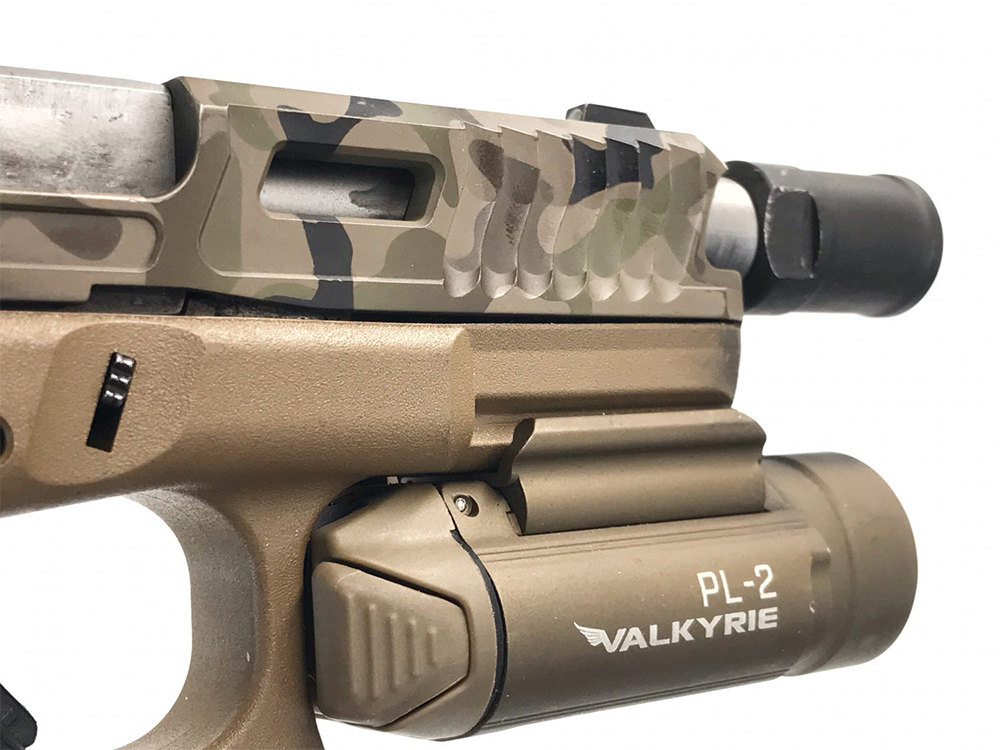 The  PL-Pro Valkyrie would be Olight’s competitor to SureFire’s X300U or Streamlight’s TLR-1 HL. This full size Valkyrie looks like it would fit in X300U holsters but unfortunately the dimensions are slightly different so universal holster fitment cannot be guaranteed. It utilizes the same rechargeable battery system as the PL-Mini 2 but this pistol flashlight has 1500 lumens, a very respectable and bright light. If you don’t want to drain your battery too quickly there’s also a 300 lumens setting on it which is better than nothing if you’re ever in a place that’s pitch black. Olight is already an incredibly budget friendly brand but they’ll still offer sales every now and then. Right now Olight is selling the PL-Pro Valkyrie close to 25% off on Amazon so if you’ve been curious about this light, now would be a good time to pull the trigger on it.

Inforce seems to have been flying a bit under the radar lately as we haven’t really heard much about them for the past couple of years. However, not too long ago they were becoming rather popular for their more angular and modern/futuristic looks. Personally, if you were to turn the clock back 5 years there’s no way I’d ever get an Inforce light even if they did partner with Travis Haley at one point on a collaborated product. Today, that might be a different story as Inforce has come out with their updated Wild Series of pistol lights. 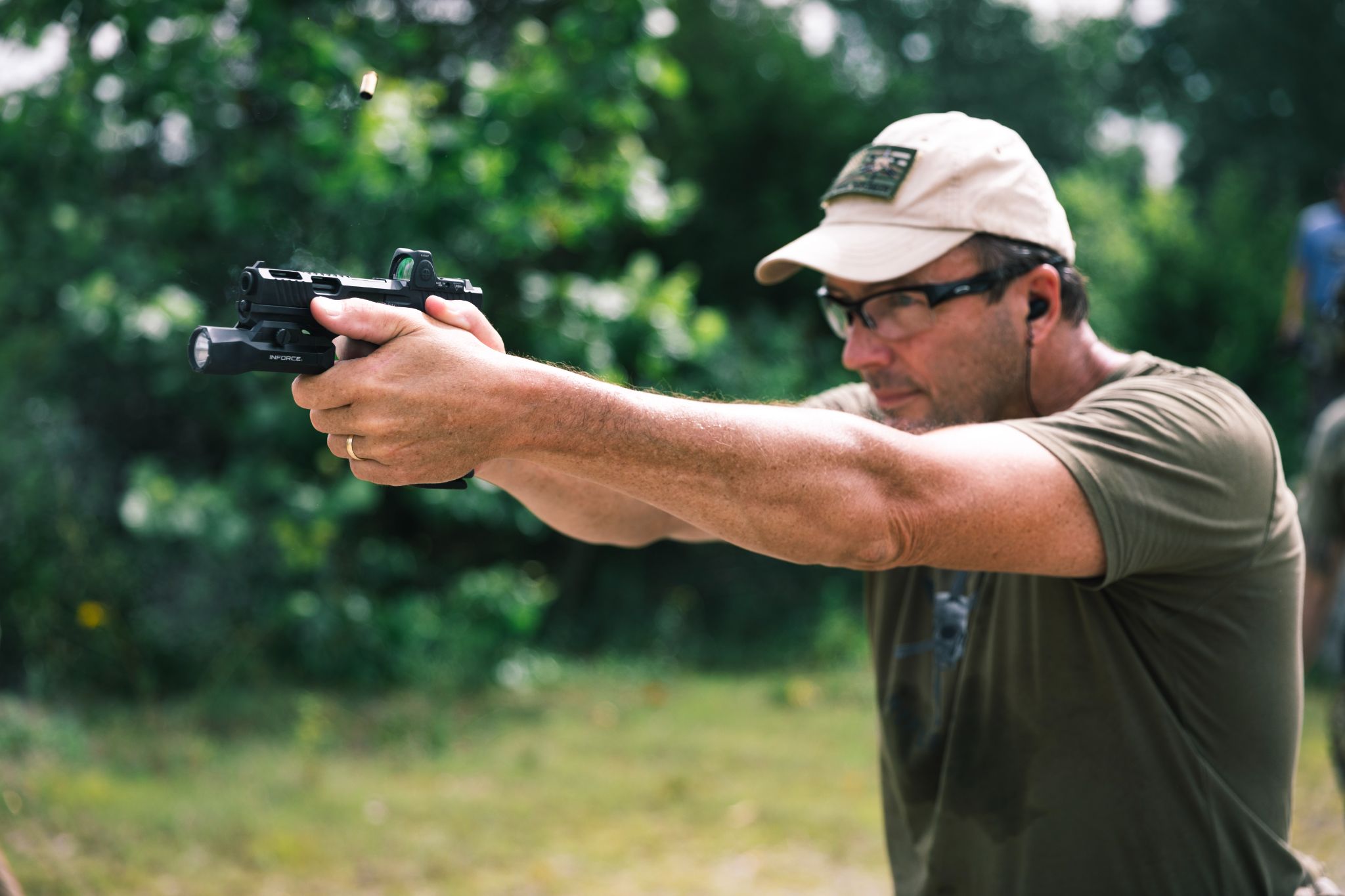 There are two pistol flashlights within Inforce’s Wild series: Wild 1 and Wild 2. The Wild 1 is set to last about 1.5 hours with an output of 500 lumens. The Wild 2 has the same runtime but its output is 1000 lumens. Both pistol lights are made out of 6061-T6 aluminum just like our 80% lower receivers. The design of the Wild pistol lights are very polygonal and kind of futuristic looking — I’d expect someone to step out of a Tesla Cybertruck with this mounted on their handgun. If that’s what you’re all about, definitely go for the  Inforce Wild 2 for the brighter lumens.

Tactical Lights to Avoid for Pistols

Among every area of handgun parts and accessories there are some products that you should definitely avoid when at all possible. Here, we discuss why the examples below should be the most forgettable in the weapon light business. 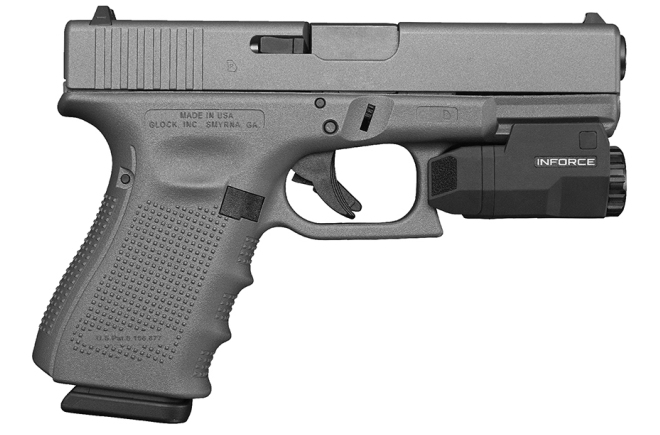 This would be the precursor to what is currently known as the Wild 1 or 2. The APLc just didn’t make sense for how popular it was in its time and how it only had an output of 200 lumens. You could look directly into the light and be completely unaffected by it. They don’t call them ‘weapon lights’ or ‘tactical lights’ for nothing. What good is a light on your gun if you can’t see much with it or if it doesn’t faze the person you direct it at? So please, if you see this light on sale somewhere at a ridiculously low price don’t be fooled into thinking this is the same as one of the Wild series and avoid buying the APLc. 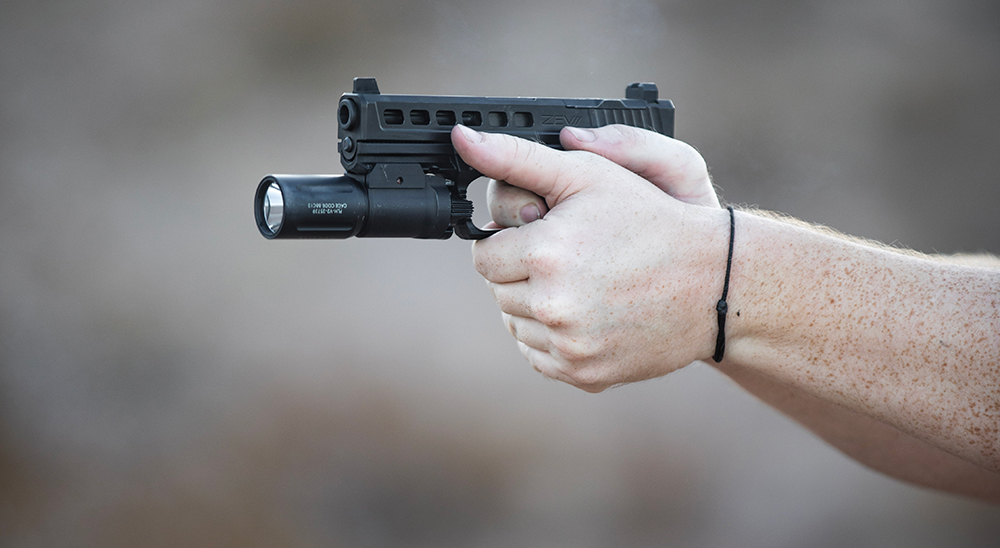 For a tactical pistol flashlight that had so much anticipated excitement and hype, this was a pretty poorly executed product launch. Modlite is known for their expensive tactical lights that have amazing throw and brightness levels so it was understandable that everyone, including us, was looking forward to this being released. There were rumors that this light was going to be the same profile as a SureFire X300U which would have been very convenient for those that already have that light-bearing holster. Since Modlite wanted to be able to have their pistol light be compatible with the PLHv2 and OKW heads it’s understandable that having the same profile as a X300U was not feasible.

The PL350 uses two 18350 rechargeable batteries, which is fine, these are common battery types used even by SureFire. However, the real deal breaker here is in the light’s operational runtime: 30 - 45 minutes which is only a ⅓ of the average industry standard runtime. Every other light we’ve listed in this article today has a continuous runtime of at least 1.5 hours. While the PL350 looks cool and might be considered a “flex” to have within the gun community, it just doesn’t seem like a practical product for any sort of duty use. Perhaps it doesn’t matter as much for civilians. As a civilian myself, I’d be pretty annoyed needing to change or charge the batteries just after using it in one day.

No nonsense solution: get a SureFire X300U. On a budget? Get a Streamlight TLR-1HL. If you’re looking for a pistol light that will be flush with a compact handgun’s slide, get the TLR-7A. But Olight’s PL-Mini 2 Valkyrie is also suitable for compact handguns and comes at a very competitive price. Carrying a subcompact gun? Get the TLR-6. It would be fun to try out Inforce’s Wild 2, though there doesn’t seem to be wide holster support for it unless you own a Glock. Don’t waste your money on the Inforce APLc or Modlite PL350. Thanks for coming to our mini TEDg Talk (g for guns).