What is ‘LRBHO?' The acronym stands for ‘last round bolt hold open,’ which is the function that keeps the bolt carrier group within a gun locked rearward on an empty magazine after the last round has been fired. Why is this an important feature to be aware of?

Well for the 80% AR-9 lowers sold by us, here at 80 Percent Arms, they do not have the LRBHO feature. That’s why we specifically sell the AR9 LRBHO kit (upper receivers from New Frontier Armory) which does have the lrbho function. This is quite common in the industry as some AR-9 lower receivers do have the LRBHO feature and others don’t. but it’s important to be aware of this because a lot of buyers will purchase our lower receiver and then choose an upper receiver from a different site which may not have the ‘lrbho’ ability in it.

The result — sometimes shooters will think that they’re AR9 is broken because the bolt won’t lock back once the magazine is empty. Some gun owners don’t mind but if you’re anything like us, we definitely want to know when our mags are dry. Even if you’re not going the 80% route, you still need to look out for this as 100% lower receivers will also have this issue. So make sure the product titles and descriptions you’re browsing through say something like ‘Ar9 complete lower with lrbho’ if you plan on using an upper receiver that won’t have the LRBHO function. 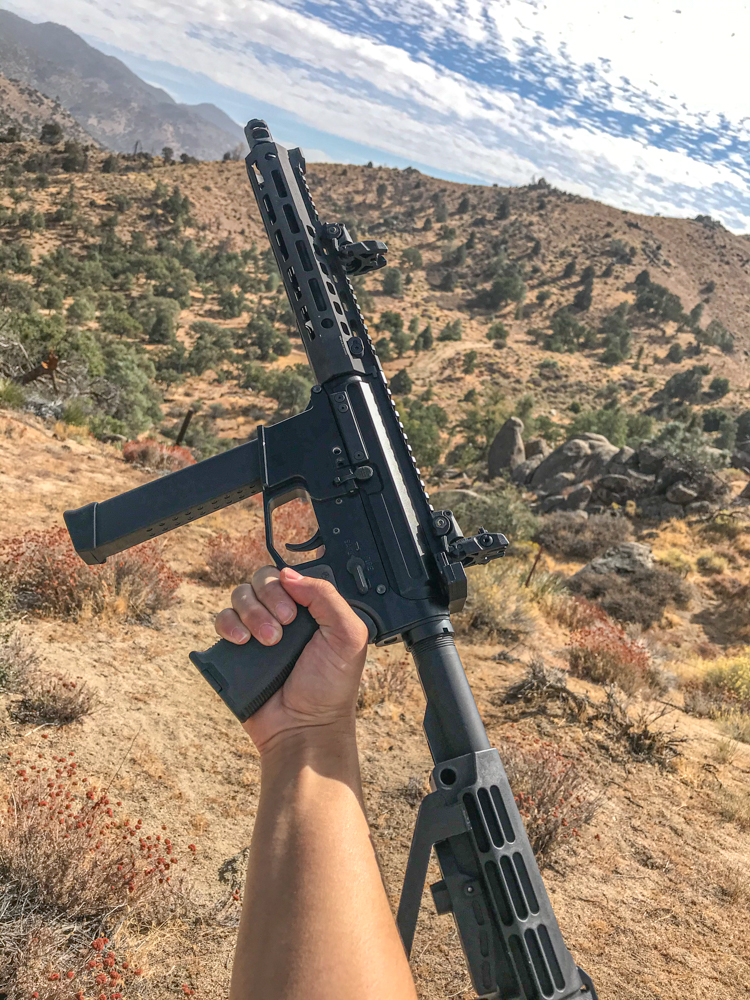 An AR9 is an AR style rifle that is chambered to fire 9mm rounds; exactly what it sounds like. To know what the difference is between AR9s vs AR15s check out our previous blog about that. We’ve also written a guide on all the little need-to-know facts when building your own 9mm AR-9.

How does an AR-9 bolt work?

Unlike AR-15s which utilize a direct impingement system, the AR-9 bolt carrier group relies on ‘blowback’ for it to cycle. When a 9mm round is fired, the gas that fills the chamber slams the spent casing backwards into the bcg which helps it get extracted as well. As the BCG returns forward it picks up a new round from the magazine on the way to feed into the barrel’s chamber.

Yes! If you have selected a quality combination of parts such as the buffer spring and weight, BCG, barrel, muzzle device; installed them properly and are shooting good ammunition out of healthy mags — There is no reason why an AR-9 shouldn’t perform consistently and reliably.

Sure, the 9mm Parabellum is only accurate at short distances within 100 yards but the caliber’s ballistic capabilities and characteristics are not deciding factors for whether the AR-9 platform is reliable or not. Because the AR-9’s blowback system has less moving parts than what AR15s and AR10s use one could argue there is more reliability in simplicity.

That’s not to say the AR-9 does not have any quirks. Due to the intense vibrations there is a larger perceived felt recoil. While that certainly can be mitigated with a heavier buffer and a muzzle brake you’ll want to make sure you don’t get too light of a trigger to avoid light primer strikes.

AR9 80 lowers have been a hot commodity this year. With the rise of ammo prices and unknown factor of when they’ll ever come back down, it makes more financial sense to be shooting 9mm over any other caliber to keep those skills fresh as shooting is a highly perishable skill. Get yourself an Easy Jig® Gen 3 so you’ll be able to build out not only an 80 percent AR-9 lower but an AR-15 or AR-10 as well.