Biden signs $1.5 trillion bill with anti-gun legislation hidden in it 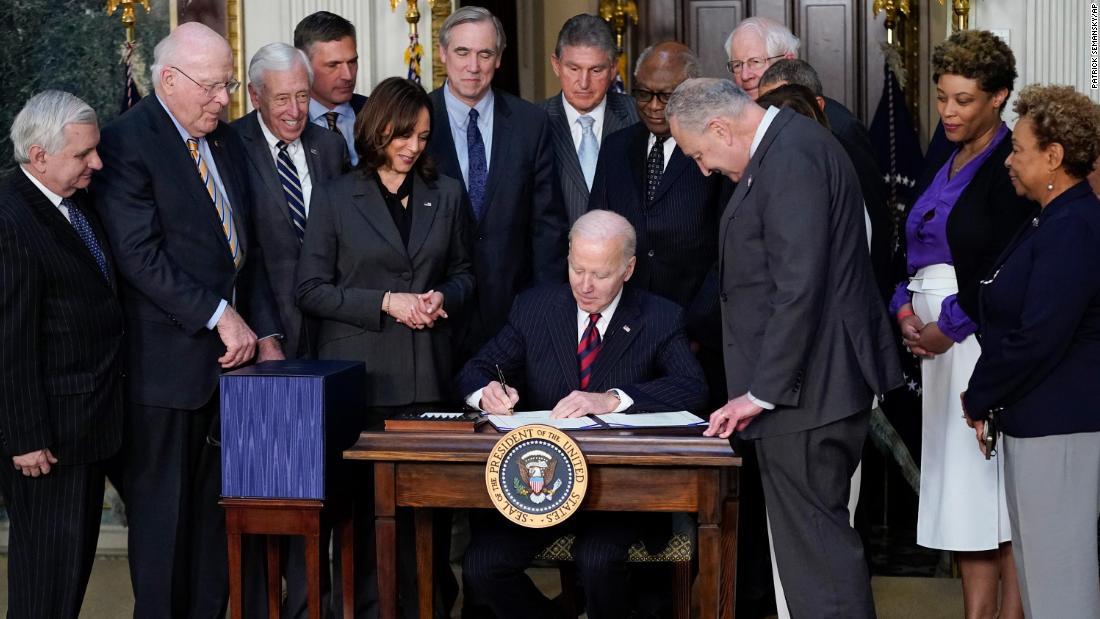 This week, President Biden signed a huge spending bill amounting to $1.5 trillion which contained the Violence Against Women Reauthorization Act (VAWA) and the NICS Denial Notification Act. Apparently, the bill was sneakily introduced as late as 1:30am last Wednesday and by the following day, it had been hurriedly passed through both the House and the Senate. Then, this Tuesday Biden signed the massive bill into law. There are so many issues with what has just transpired because within this spending bill, at least four major anti-gun policies were originally introduced which pose a serious threat to our community:

1. ATF To Deputize Local Law Enforcement - The ATF wants to deputize local law enforcement officers in states that have passed Second Amendment Sanctuary protection laws in order to enforce federal gun laws as a way to override the 2A Sanctuary’s jurisdiction. (Passed into law)

3. “Boyfriend Loophole” Expanded - In theory, this sounds like a relatively good piece of legislation where federal laws fill the gap to bar dangerous individuals from being able to legally own firearms. Some of these sorts of people may include abusive dating partners, convicted stalkers, people under “extreme risk orders,” people convicted of a violent misdemeanor, people under emergency domestic restraining orders, people with outstanding warrants, etc.

So why would the pro-gun community be against this policy? The reason stems from the unfortunate reality that this will inevitably be abused as it erodes due process, increases the risk to lawful firearm owners and potentially dangerous interactions between the public and the police. In layman’s terms, it’s going to be “her word against his” and based on the legislation there is no due diligence required on law enforcement’s end to confirm any such reports against “dangerous men or individuals.” The fear is that overzealous police officers may simply respond without any research resulting in law abiding citizens losing their 2A rights without any clear way to get them back. (Thankfully, this part was also struck from the bill but that doesn’t mean the anti-gunners won’t try again to expand red flag laws on a federal level.)

4. NICS Denial Notification - Criminal investigations will now be launched into firearm transfer background check denials even though 9 times out of 10 the system incorrectly denies a law-abiding citizen attempting to purchase a firearm. Most of the time it’s a clerical issue. (Passed into law)

When we saw the alert from Gun Owners of America about this spending bill being rushed through lawmakers’ hands last week we also tried to warn people but didn’t have enough time to react which was likely the anti-gunners’ intention. What’s most unfortunate is that if the republicans had banded together, the bill actually could have been stopped.

Biden's "Firearm Taskforce" Can't tell left from right... or can they? 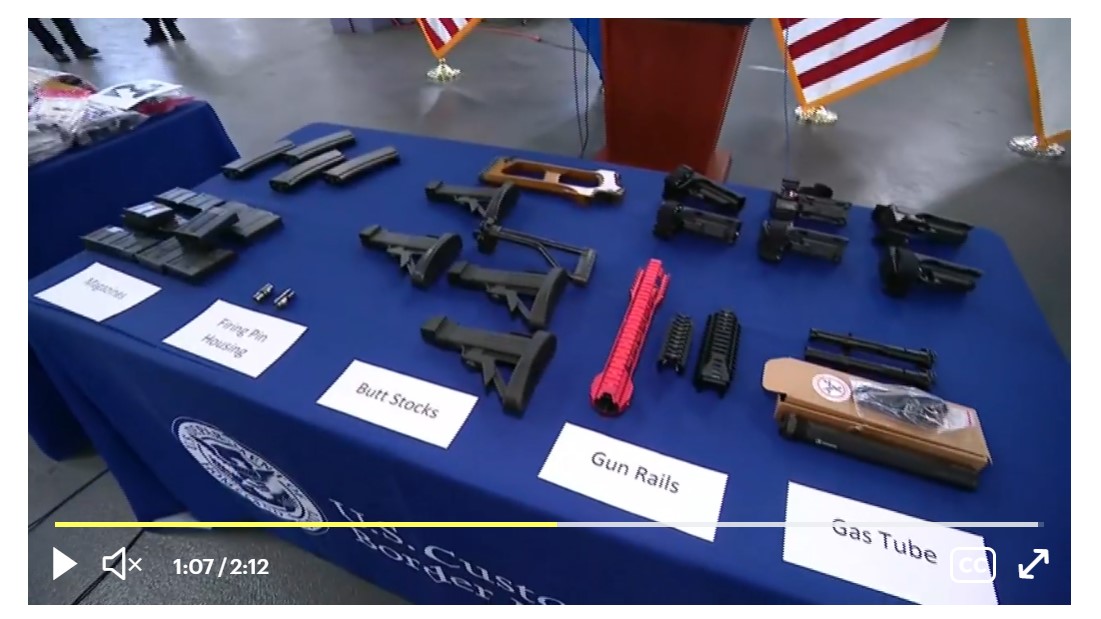 Remember that “Iron Pipeline” Biden was on about not too long ago? Well his “firearm taskforce” has finally made their first official appearance in the news this week with a report on how many illegal firearms have been confiscated from anti-firearms trafficking efforts. If you watch the video from that news source’s link, you’ll see agents presenting their haul of firearms, parts and accessories with respective labels for the media’s benefit.

What caught our eye were the labels “gas tube” and “firing pin housing.” Initially we thought it was funny that these were actually buffer tubes and possibly a part of the bolt carrier group. But upon deeper reflection, this became concerning. Why are they flaunting these firearm parts that are essentially unregulated, and on their own, pose no threat? The Long Island News12 coverage also suggests that more law enforcement is training their K-9’s to detect firearms/parts as well.

Does this mean any state or federal officer can just pull any one of us over on the side of the road and book us for having miscellaneous gun parts? We sure hope not… but with the recent push in banning “precursor firearm parts” in California we can’t help but wonder if this is the new national direction that anti-gunners are scheming to eventually push onto the whole country. 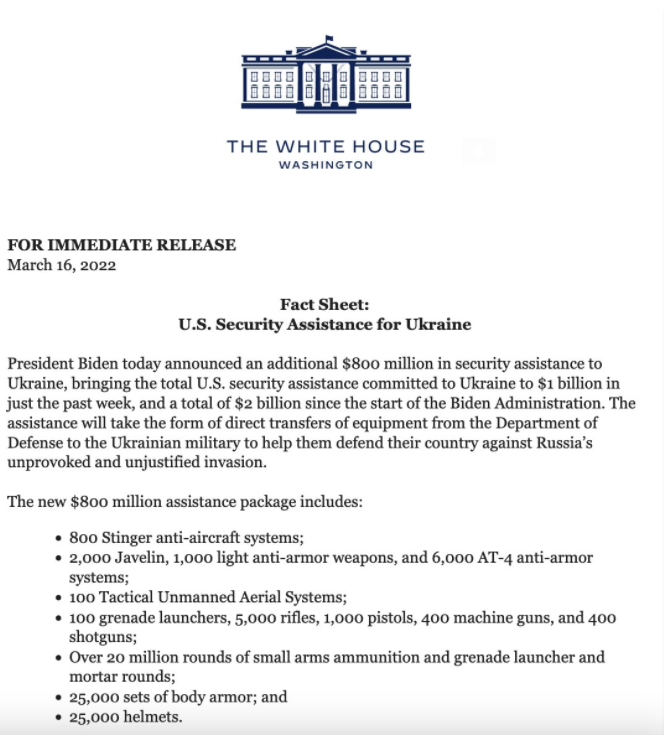 (Photo Source: Whitehouse.gov)
The White House Press has been having a field day this week with Biden’s Press Secretary Jen Psaki as she was caught off guard twice - once for struggling to defend the United States’ actions for supplying the Ukraine’s with rockets and drones but not fighter jets. Another instance when a hero of a reporter challenged Psaki on the White House’s use of words regarding “offensive vs defensive” weapons. For your own entertainment and education, see for yourself. Classic, “guns for me but not for thee.”

Yes, this is a short video clip, however, we’re not twisting words here. The White House’s very own press release on what arms and equipment were provided to the Ukrainians for their war effort against the Russian invasion used those terms! While we do support Ukraine, it can be extremely frustrating that the Biden Administration and mainstream media will call normal AR's for us as "assault weapons" or "offensive weapons" meanwhile, in the hands of the Ukrainians they're labeled as  "powerful hunting rifle" or "defensive weapons." As far as double standards go, this one is just so blatantly in our faces.

Not to mention how difficult it is for American civilians to own machine guns or afford expensive body armor equipment and ammunition. We want Russian forces to be repelled and for the conflict to end, but this administration clearly has no qualms giving away guns, gear and ammo for free to people other than Americans. Anybody remember how much military equipment and arms we left to the Taliban when we exited Afghanistan?

(Photo Source: 80 Percent Arms)
Lastly, what seems to have become our regular breath of fresh air, it’s official - Ohio and Alabama have signed Constitutional Carry into law which means Alabama and Ohio residents can now carry concealed firearms without a permit (provided they meet the legal requirements to be able to do so). It’s almost hard to keep up as the first quarter of the year isn’t even over yet, but we expect to have Indiana as the 24th state with constitutional carry by the end of March. Which states are next?

Given the current rate of states passing various forms of permitless carry legislation, we may very well have more than half of the country join this movement before the halfway point of 2022. Could we possibly have 30 states by the end of 2023? Regardless, politicians around the country should take a hint: If a majority of states are refuting federal laws deemed unconstitutional what does that say about the administration and agencies pumping those out and enforcing them?